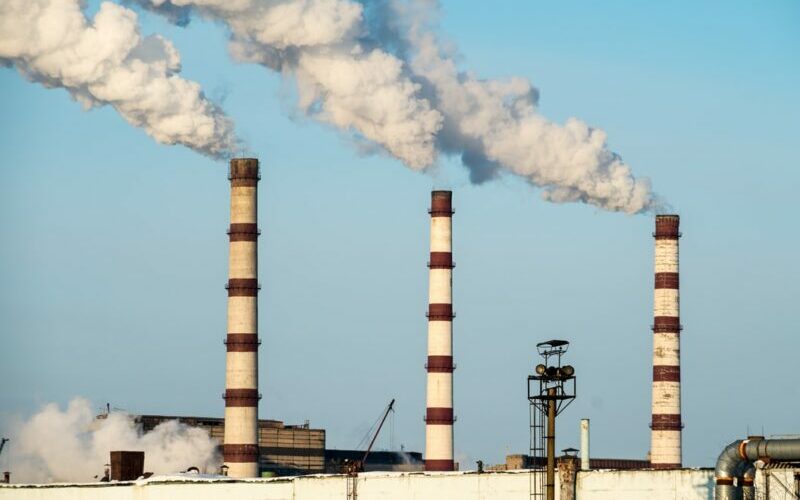 China could close all its coal-fired power stations by 2045. North Atlantic right whales facing climate change threats quicker than humans are moving to protect them. More than 200 environmental activists murdered in 2020.

I deplore our prime minister’s cynical reference to China’s coal problem to deflect attention away from his own failure to formulate any decent strategy to tackle Australia’s greenhouse gas emissions.

That said, it is undeniable that unless China does rapidly reduce its dependence on coal for generating electricity the world will be unable to keep warming below 2oC, never mind 1.5oC. China’s currently operating 1037 coal-fired power stations have the capacity to generate approximately 1050 GW, more than the rest of the world combined, and they have another couple of hundred GW in the pipeline.

So China definitely needs to do something about its coal-fired generators, the majority of which are under 15 years old, if it’s to meet its commitment to carbon neutrality by 2060. Can China quickly eliminate its dependence on coal? That’s the burning question.

Based on a technical, economic and environmental analysis of every individual unit in each of China’s 1037 coal plants (nearly 3000 units), research published in Nature suggests that the answer is “yes”. Yes, there is a feasible retirement strategy for each of the plants that will achieve net zero CO2 emissions for China by 2045 and keep the world on a 1.5oC warming trajectory.

In fact, 18 per cent of the plants perform so poorly on all three criteria that they could be closed down relatively easily in the near term. The utilisation of the rest would be gradually reduced over the next 20–30 years. But there are three important caveats: all new construction of conventional coal plants must stop now; the phaseout must be accompanied by increasing electricity generation from wind and solar power; and the phaseout must be accompanied by a just transition for all affected communities and stakeholders. According to the researchers, several of who are based in China, all this can be achieved while also meeting Chinese national priorities such as grid stability and regional equity.

Just by way of comparison, Australia’s current coal-fired capacity is around 25GW. Our current rooftop solar capacity is 14GW and is expected to grow to 23GW by 2025.

It’s always tempting to believe that governments develop public policy on the basis of a careful consideration of all the relevant evidence about, for instance, the cost, effectiveness, safety, ethics, public acceptability, etc. of alternative approaches to solving a problem.

The Institute for Energy Economics and Financial Analysis (IEEFA) has skewered the government’s proposal by pointing out that it would result in household electricity bills increasing by $182–430 per year, up to three times more than the increase experienced during our fleeting carbon price. This is despite the actual generation of electricity accounting for only a third of the price consumers pay:

IEEFA points out that a much better way of keeping electricity prices down — one third of the energy trifecta of reliable, clean and cheap — would be for the government to focus on electricity’s grid transmission and distribution costs.

They could then direct the Australian Energy Regulator (AER) to change the formula for calculating the prices charged by the highly regulated monopolies responsible for distribution. They could also abandon plans for unnecessary, costly, additional generators such as Snowy 2.0 and the Kurri Kurri gas plant. The sooner all our electricity is generated from renewable sources the better, not just for the health of the environment and humans but also to free us from all the repeated self-serving garbage about the need for coal when the sun doesn’t blow and the wind doesn’t shine.

Climate change catching up with whales

There were around 10,000 right whales in the North Atlantic Ocean before whaling became common but by the 1890s they’d been hunted almost to extinction. The ban on commercial whaling allowed their numbers to creep up to around 500 but climate change is now causing numbers to decline again, to around 350 presently.

North Atlantic right whales, which have a natural lifespan of about 70 years, traditionally feed in the Gulf of Maine but warmer water has caused their crustacean food source to plummet. In response the whales moved north to the Gulf of St Lawrence but now they are being killed by entanglement in crab and lobster fishing gear and collisions with ships. This didn’t happen to the same degree in the Gulf of Maine because safeguards had been introduced to protect the whales from these mishaps — closure of fisheries when whales were present and speed limits on shipping.

Unfortunately, climate change is getting to the whales more quickly than government policies, and the protections that were in place around Maine weren’t there in the Gulf of St Lawrence. Plus the decline of crustaceans in the whales’ diet led to a drop in reproduction rates.

So, one way or another, climate change is slowing the whales’ births and increasing their deaths. If we want to prevent climate-related extinctions we need to be much quicker at spotting and responding to climatic and ecological changes. Educating dumb politicians who suggest that animals threatened with loss of habitat can simply fly, swim, crawl or walk elsewhere might help too.

Last year, 227 land and environmental activists were murdered — the highest number recorded in a single year, and it’s probably an underestimate. I’ve written about this issue before but admiring and paying tribute to those who have lost their lives in this brutal way is the least I can do for them.

Countries in Central and South America are by far the most dangerous for activists both in terms of totals murdered (165) and rates per capita but the Philippines deserves a dishonourable mention. A third of the murders were related to resource exploitation: logging, hydroelectric dams, mining and agribusiness. Indigenous people and small scale farmers defending their land, forests, rivers, coastal areas and oceans were the groups most targeted.

Governments have a duty to guarantee the rights and safety of all persons. Companies (and those who invest in  or do business with them) have an absolute obligation to ensure that their operations and suppliers have a zero-tolerance for violence, operate within the law, respect human rights and ensure that any allegations of misconduct are properly reported and investigated.

One hopes that all Australian companies, and their investors, are vigilant in ensuring that their activities around the globe are not implicated in any violence or human rights abuses.

Simón Pedro Pérez López, a 35-year-old father of seven, environmental and human rights campaigner in Mexico, was gunned down in a drive-by shooting in July. It’s not much but if you feel so inclined, please sign the petition demanding justice for Simón Pedro.

Two years ago I reported regularly on the mating of two sea eagles near the Parramatta River in Sydney and the subsequent egg laying, hatching and development of two chicks. Well, our metropolitan raptors have been breeding again this year and two chicks hatched in late July. They are developing well, as demonstrated by the screen shot below taken on September 7. You can follow their further development and fledging, which should occur in mid-October, on Sea-EagleCAM. 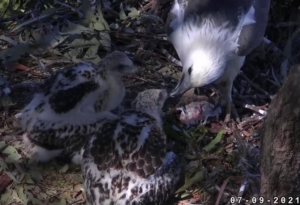 Interestingly, humans aren’t the only ones to suffer unwanted attention from magpies in spring. 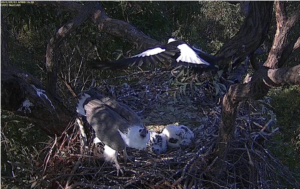