Sunday environmental round up, 23 August 2020

A rich man takes some lessons from COVID and a businessman tells us how to correct the failings of the EPBC Act. Scotty has a heatwave named after him. Canada loses an ice shelf and the French say ‘Non’ to a bicycle ad. But, bad news …

… that’s it, folks, you can’t consume anything else for the rest of the year. Yesterday was Earth Overshoot Day 2020, the day when the world has consumed its whole year’s supply of renewable biological resources. As recently as the early 1970s we didn’t get there until late December but for the last decade it’s been late July/early August. It’s been delayed three weeks this year – no need for me to tell you why. If the whole world consumed like Australia, we’d get to Overshoot Day almost five months earlier, around the end of March each year.

When disaster strikes, it is human nature to worry only about meeting our most immediate needs, especially when the disaster is as bad as COVID-19. But the fact that dramatically higher temperatures seem far off in the future does not make them any less of a problem—and the only way to avoid the worst possible climate outcomes is to accelerate our efforts now. By 2060, climate change could be just as deadly as COVID-19, and by 2100 it could be five times as deadly. In the next decade or two, the economic damage caused by climate change will likely be as bad as having a COVID-sized pandemic every ten years. What’s remarkable is not how much emissions will go down because of the pandemic, but how little. We are still on track to emit 92 percent as much carbon as we did last year. The shutdown is reducing emissions at a cost between 32 and 54 times the $100 per ton that economists consider a reasonable price. The current global crisis can inform our response to the next one.

Mea culpa. The words in the paragraph above are not my words. Bill Gates wrote them. He finishes the piece with three lessons. Let science and innovation from many diverse disciplines lead the way. Make sure solutions work for, and are affordable for, poor countries, where the human and economic effects of climate change are greatest. Start now and keep it up for decades to avoid repeating the mistake we made with COVID with climate change (i.e. hoping it would never happen). He predicted COVID in 2015. He’s nailed it with climate change in 2020.

The public consultation period for Professor Samuel’s Interim report of his review of the Environmental Protection and Biodiversity Conservation (EPBC) Act closed last Monday. The final report is to be submitted to the Commonwealth Government in October. Professor Samuel clearly identified gross failings in the Act itself and/or its implementation that have led to terrible environmental consequences. He also made draft recommendations to remedy the deficiencies. Unfortunately, the Government has not bothered to wait for the final report before rejecting some of Samuel’s recommendations and acting. In particular, the government has already advertised its intention to devolve approval powers over matters of national environmental significance from the Commonwealth to the states and territories. Under the guise of COVID recovery, the Government intends to introduce amending legislation immediately to further facilitate this devolution of powers, and the Minister for the Environment published on August 12th a notification of her intention to negotiate bilateral agreements for environmental approvals. The states and territories have weaker environmental standards and potential conflicts of interest as beneficiaries of major project royalties. Also, they often have insufficient resources and expertise to grapple with complex approvals and don’t have the same accountability to international agreements. David Morris, CEO at the EDO, told me, ‘devolution would be a very dangerous development. Without commitment to things such as an independent regulator, improved state and territory standards and vast increases in funding, it’s difficult to see how the environment wouldn’t suffer from this decision’. Maintain the rage.

Cyclone Tracy 1974. Hurricane Katrina 2005. Heatwave Scotty 2020. In developed countries, heatwaves are the major cause of death among the various extreme weather events, and they are certain to become more common, longer and hotter whatever happens to greenhouse gas emissions. Urgent action on various fronts is required to limit the loss of life. Groups in the USA and UK have proposed that heat waves should be given names and severity rankings similar to storms. The aim is to make is easier for the media to report impending events and increase public awareness of the dangers and the preventive measures they can take. Severity rankings would also help authorities to set up systems to reduce the impact of heat waves and respond when they occur. They might encourage municipal authorities, developers and residents to design and create built up areas that reduce the heat island effect which can cause urban areas to experience even higher temperatures than surrounding rural areas.

Ice shelves are the ends of glaciers that ooze into the sea but don’t immediately thaw. Rather, they form massive ice sheets that float on, or mostly below, the surface of the sea. Canada’s last fully intact ice shelf recently lost 40% of its area in two days and collapsed, forming an iceberg covering about 80km2. The collapse was caused by abnormally high temperatures – the Arctic has been warming much faster than the global average. The ice shelf plays an important role in slowing the progression of the land-based glacier behind it into the sea. Loss of the ice shelf hastens the thawing of the whole glacier.

The French love their revolutions, demonstrations, liberated sexual mores and Tour de France but maybe they aren’t such a free-wheeling nation after all. The French Advertising Regulator has banned a TV ad for a Dutch bicycle company because it creates a climate of anxiety by discrediting the car industry. Apparently not the first time the Regulator has sided with capital rather than conservation. 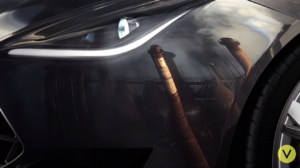