Sunday environmental round up, 25 October 2020

The absorption of solar energy by the earth is getting faster and faster. This is having dramatic effects on the dynamics, chemistry and life of the oceans, and bringing ‘Hothouse Earth’ closer. Over half of residents of the USA are now concerned about climate change. Farmers in the Riverina create Bittern-friendly rice fields.

To recap briefly, there is (if you’ll excuse the mixed metaphor) a natural ‘blanket’ of ‘greenhouse gases’ around the earth. This blanket allows the sun’s incoming radiated energy to pass through but blocks some of the earth’s outgoing radiated energy. We need this natural blanket to provide a habitable environment – without it the whole earth would be much colder and we would all freeze. However, over the last 200 years we have increased the amount of greenhouse gases in the atmosphere, principally through the burning of fossil fuels. This has, so to speak, ‘thickened’ the blanket, reducing even further the energy leaving the earth, and disrupting the earth’s critically important in-out energy balance. Because more solar energy is being retained, the earth is warming compared with the last 10,000 or so years, the period during which human civilisation developed.

I hope you’re still with me because I want to highlight two points from a recent paper that has investigated the ‘Earth Energy Imbalance’ that I have just described:

See below for a pictorial representation of this. 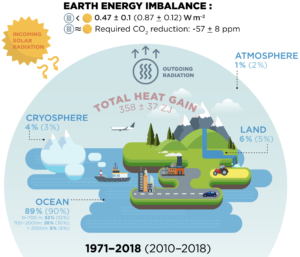 One consequence of the enormous amount of heat being taken up by the oceans is that it is leading to multiple changes in both the oceans themselves and the earth’s climate and weather systems. In response to temperature, salinity and pressure, sea water forms fairly stable stratified layers. In general, less dense layers are near the surface and denser layers at greater depths. The layers impede water mixing and this limits the vertical exchange of heat, carbon, oxygen and nutrients, although clearly there is some mixing as a result of currents and storms. Global warming has increased the stratification of the water near the ocean surface by about 5% globally since 1960. The increased stratification and reduced vertical mixing in the oceans have increased the levels of heat and CO2 in the surface layer but this could ultimately reduce the amount of heat and CO2 that can be taken up by the ocean from the atmosphere. This could lead to more CO2 and heat being retained in the atmosphere and even hotter temperatures over land. Warmer surface waters could also lead to bigger, more intense, longer lasting tropical storms.

The decreased vertical exchange may also explain some of the decline in oxygen and nutrients in the oceans’ surface layers that reduces marine biodiversity and disrupts fisheries. Reduced ocean mixing may also alter climate patterns, perhaps pushing the Pacific’s El Nino-La Nina cycle to a permanent El Nino state with consequences for Australia’s climate. According to Michael Mann, one of the study’s authors and a renowned climate scientist: ‘The take-home point, here, is that once again we are learning that the uncertainties are not breaking in our favor. If anything, the impacts of climate change are proving to be worse than we predicted.’

For the perspective of Johan Rockstrom (another environmental science megastar) on the increasingly rapid environmental changes we are observing and experiencing, I strongly recommend the 7-minute talk he prepared for the recent launch of ‘Countdown, a global initiative to accelerate solutions to the climate crisis’. Rockstrom discusses with great clarity the additional dangers posed by climate tipping points, including sea level rise and the possibility of ‘Hothouse Earth. He concludes: ‘This is not a climate emergency, it is a planetary emergency. Our children have every reason to be alarmed’. The science is clear that the next ten years will be critical and that to find a ‘safe corridor for humanity … not to save the planet but to provide a good future for all people’ global emissions must be cut by half by 2030 and reach net-zero by 2050 or sooner. It’s noteworthy that scientists such as Mann and Rockstrom have been criticised in recent years for being too conservative, too cautious about speaking out about environmental threats and the urgency of the situation.

A survey in 2008 of the views of American adults about global warming identified six different groups. The chart below identifies the groups and shows how their composition has changed between 2015 and 2020. Broadly speaking the Disengaged, Doubtful and Dismissive have decreased from 35% to 25%, while the Alarmed have increased from 11% to 26%. The combined Concerned and Alarmed now constitute 54% of the population. ‘Know thy audience’ is the researchers’ message for climate activists wishing to engage with the public. I’d add: don’t waste your own and the world’s very limited time on the 3Ds, let them wither away or just become irrelevant. Focus on getting the Concerned and Alarmed (and possibly the Cautious) active both locally and politically. 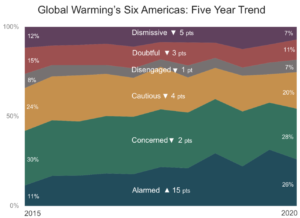 The Australasian Bittern is a heron-like bird that was once widespread across the wetlands of southern Australia. Loss and degradation of its habitat (remember the piece last week that highlighted the loss of 90% of the world’s wetlands since 1700) has caused a serious decline in numbers worldwide and there are now only about 2,000 left. 40% of these breed in the rice crops of the Riverina. The Bitterns in Rice Project offers incentives to growers to plant bittern-friendly crops and control feral predators. They’ve had some success: four times as many bitterns were observed by researchers at friendly sites compared with control sites. There’s a bit more to the story than that (water use and costs, for example), which you can explore in the article. 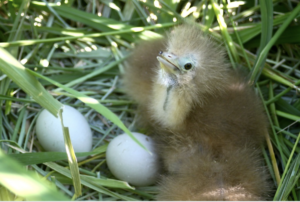