The NT’s moratorium on seabed mining expires soon. Invasive animals and plants are a serious and growing threat to the environment and humans. Japan moves away from funding overseas coal-fired power but inadequate climate action renders CO2 removal from the atmosphere more likely.

Last week I discussed seabed mining, perhaps inadvertently misleading readers into thinking that this is being planned only in the middle of the oceans – i.e. in international waters. Not so. Quite a bit of seabed mining is planned relatively close to shore – i.e. within the territorial waters of individual nations. There is an international body, the UN’s International Seabed Authority, that is responsible for regulating mining in international waters but in territorial waters it’s all controlled by the responsible nation. So what is Australia doing? It might be news but you probably won’t be too surprised to learn that at least eight applications (covering over 13,000 km2) to explore areas of the seabed off the Northern Territory have been lodged. No exploration or mining has yet begun, however, because of a moratorium introduced by the NT government in 2012. Worryingly, that moratorium expires in less than twelve months, in March 2021.

To assist the government’s decision making about the future of the moratorium the NT’s Environmental Protection Authority commissioned a series of reports into the environmental, social and cultural impacts of seabed mining. The information in these reports, released following an FOI request, forms the basis of ‘Seabed mining threatens Top End treasures’, a twenty-page report (four tables give you the main points) prepared for an alliance of environmental groups. Our famously intelligent octopuses could tell you that seabed mining off the NT coast will destroy seabed and coastal environments (mangroves, seagrasses, tidal flats, coral reefs, estuaries); threaten turtles, dolphins, dugongs, fish, crocs, migratory shorebirds and seabirds; adversely affect Indigenous culture, values and practices; and damage local communities’ social fabric, but it’s somewhat reassuring to know that the NT government has been told all this by its consultants. They’ve also been told that the local economic benefits are likely to be low. One of the more risible ideas promoted by the aspiring miners is that when a seabed mine reaches the end of its life they will organise environmental rehabilitation.

(The only current seabed mining in Australia is sandmining in Cockburn Sound (WA) and Moreton Bay (Queensland).)

The 18,000 species of invasive animals, plants and microorganisms around the world are a major problem, particularly on islands and in coastal areas. Australia (particularly Queensland and Victoria) and New Zealand (almost half of their plants are alien) are two of the worst affected countries. This comprehensive but readable review of the worldwide problem identifies the main introduction pathways: deliberate release, escape from captivity, contaminants of commodities, stowaways on human and natural transports, anthropogenic corridors such as canals, thawing of the ice barrier between the Pacific and Atlantic Oceans, and unaided geographic spread.

Factors driving invasion include climate change, land use change, pollution, transport of humans and goods, and increased economic activity. Harmful impacts on the environment and human well-being are immense. The article summarises the tools available to control the problem: international agreements, national biosecurity programs (Australia and New Zealand are noted as leaders in making this a national priority), surveillance, physical, chemical and biological control, and gene editing (let’s hope we are less cavalier with genetic control than we have sometimes been with biological).

If the review is a bit too daunting for you, this 2-minute video, which presents an Indian perspective, serves an easily digestible summary. And in case you missed it, Bob Debus recently provided P&I readers with powerful arguments for more government action to tackle invasive species in Australia (the comments to Bob’s piece are also interesting).

The headline says ‘Japan takes a welcome step away from coal’ and the text starts by reporting the decision by Japan, a major funder of coal projects overseas, to move away from funding new coal fired power plants in developing countries. But the bulk of the article is about the need for China, which is involved in funding a quarter of the coal plants being developed beyond its borders, to follow suit. This, we are told, is incompatible with achieving the Paris Agreement targets and ‘makes scant financial sense … when new renewables are cheaper than new coal plants in many parts of the world’. The really interesting element, however, is that this is not an article by a firebrand reporter in a leftie-greenie rag. It’s an editorial in the Financial Times.

Rapid reduction of global greenhouse gas emissions to zero remains the first priority for avoiding catastrophic climate change. However, the longer the world procrastinates about meaningful climate action and the further we push net zero emissions into the future, the more certain it becomes that we will at some point need to start removing greenhouse gases from the atmosphere and storing them securely for a long time if we are to keep global warming under 2oC. Currently CO2 (rather than methane or any of the other greenhouse gases) is the focus of activity. There are multiple options available for atmospheric carbon drawdown (or carbon capture and storage, carbon sequestration, negative emissions … call it what you will).

Focusing on the natural long-term storage processes available (with or without enhancement by humans), carbon storage can occur in plant matter (particularly trees), in soils, in silicate rocks (mimicking natural weathering), and in the oceans, which contain sixty times as much CO2 as the atmosphere. Storage in soils looks particularly promising. Soil naturally contains more than three times as much CO2 as the atmosphere but this has been seriously depleted by land clearing and cultivation. This could be turned around, however, by changed land management practices (mixed rather than monoculture crops, no tillage, manure instead of artificial fertilizer, crop rotation, winter cover crops) and by turning waste organic materials (farm or domestic) into biochar, a type of charcoal that can be incorporated into the soil and holds its carbon for thousands of years. Needless to say, all the proposed methods involve costs and problems and it’s unlikely that any single one will be sufficient.

To finish, a reminder about EagleCam, the live coverage of the two Sea-eagles that nest each year in Sydney’s inner western suburbs. I took the screen shot below last Saturday. The two eggs were laid about four weeks earlier. 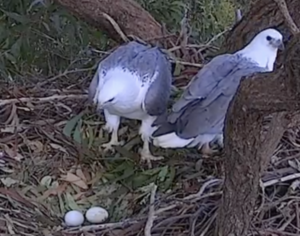