Sunday environmental round up, 27 September 2020

Despite presidents and SUV drivers doing their bit for oil, the industry is going down the drain. China steps into the global climate action vacuum. Dr Fauci calls for a new relationship with nature to reduce the likelihood of more emerging infectious diseases. WH Auden praises the USA.

The oil and gas industry likes to present itself as not only responding to the problem of climate change but also being part of the solution. As this report in the New York Times demonstrates though, industry executives are principally interested in burnishing their public image, particularly among younger people, so that the industry survives for as long as possible. They are not particularly interested in reducing their greenhouse gas emissions. This will come as no surprise to P&I readers, but the Times provides some convincing evidence of the industry’s true priorities. At an industry conference, one executive, concerned that gas flaring presents a ‘huge, huge threat’ to the industry’s efforts to project itself as climate-friendly, asks, ‘What’s our message going forward? What’s going to stick with those young people and make them support oil and gas?’ Image and profit, not emissions, are the industry’s priorities.

Mind you, if you’re an executive in an industry that has falling profits and massive capital write-offs because demand and prices for your product are collapsing, and you’ve been overproducing so there is a glut, I suppose you would be a tad worried about your industry’s image, and your own job. Australia digs coal and pumps gas so we don’t hear too much about the travails of the oil industry, but it was struggling globally before COVID and its future is looking even worse now. This spells big trouble for oil companies who want to maintain their profits and power and for states that are dependent on oil to make their budgets balance (e.g. Saudi Arabia and Russia). Governments face some big decisions. Will they orchestrate a managed decline of the industry or let it stumble along and collapse at some point? What actions will rich countries take to assist developing countries to leave their oil in the ground and/or transition to renewable energy. How will governments assist workers who are made redundant by bankrupt companies as the whole industry implodes?

The straight line from oil-money to Trump’s victory in 2016 to the USA’s imminent withdrawal from the Paris climate agreement  to the significance for global warming of the forthcoming presidential election is drawn out by Bill McKibben. Another four years of Trump will see the USA lose its opportunity to cut power sector emissions by 80% and create millions of jobs by 2035. It will also signal the USA’s complete absence from any global leadership role on climate change. In contrast, Biden has seriously ramped up his climate action commitments in recent months, including promising to re-sign the Paris agreement. He is also being pressured by Democrat donors to exclude all people with links to fossil fuels from his campaign and, should he win, his administration. Looks like US voters will have a real choice on climate change in November. What chance Australian voters having one next time around?

President Xi Jinping has stepped into the climate leadership void created by Trump and declared China’s aim to peak its CO2 emissions by 2030 and reach carbon neutrality by 2060. It will be interesting to see if China’s commitment and Biden in the White House prompts any  change to Morrison’s climate action nihilism.

During 2010-18 SUVs were the second largest contributor to the increase in global CO2 emissions. This was due to a combination of increasing numbers on the road and their greater weight and higher emissions per kilometre than other types of car. If all SUV drivers formed their own country, they’d be the seventh largest emitter in the world. In 2019, 40% of global car sales were SUVs. They may have names such as Land Cruiser, X-Trail, Land Rover, Forester, Everest, Trailblazer and Outlander, but the only off-road driving many SUVs experience is the weekly ballet with their cousins in Coles carpark.

Dr Anthony Fauci shot to fame as Trump’s infectious diseases expert in the early stages of COVID-19 but disappeared from view when he wasn’t saying what the ‘very stable genius’ wanted. Fauci has recently co-authored a paper in the scientific journal Cell titled ‘Emerging Pandemic Diseases: How We Got to COVID-19’. It’s somewhat technical in places but Fauci and colleague present a nice overview of the issues. A brief review of the history of emerging infectious diseases, starting with the Plague of Athens in 430BC, highlights their increasing frequency over the last 50 years and concludes that ‘we have entered a pandemic era’ (good to know). After considering the roles of the infectious agents (e.g. the virus), the host and vector (humans and other animals) and the local and global environment in the emergence of infectious diseases, the authors discuss humanity’s ‘increasing inability to live in harmony with nature’ and conclude that our ‘activities represent aggressive, damaging, and unbalanced interactions with nature [which] will increasingly provoke new disease emergences’. Living in greater harmony with nature, they conclude, will require many changes: rebuilding cities, homes, workplaces and places where we gather; reducing overcrowding at home and work and in public places; minimising damaging environmental practices such as deforestation and intensive animal farming; improving sanitation and hygiene; and ending global poverty. Not too difficult to see why Trump quarantined the good bug doctor.

David Suzuki was the first person I heard discuss humanity’s need to establish a new, more respectful relationship with nature, several years ago at Sydney Opera House. To be honest, I think that before that I had focused on the ways in which humans abused different aspects of the environment in multiple ways; I hadn’t conceptualised it more holistically  as humans having ‘a relationship with nature’. Humanity’s broken relationship with nature is succinctly and visually presented in this one-minute video from WWF.

In honour of the strong emphasis this week on the USA, I’ll leave the final word to WH Auden:

Another morning comes: I see,

Dwindling below me on the plane,

The roofs of one more audience

I shall not see again.

God bless the lot of them, although

I don’t remember which was which:

So friendly, and so rich. 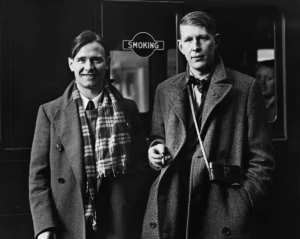