Sunday environmental round up, 28 March 2021

Eight tips to save insects from catastrophic (for them and us) decline, followed by articles on a green COVID-recovery and the energy transition, including Do’s and Don’ts for subsidising hydrogen.

‘Insects constitute the vast majority of known animal species and are ubiquitous across terrestrial ecosystems, playing key ecological roles. As prey, they are critical to the survival of countless other species, including the majority of bats, birds, and freshwater fishes. As herbivores, predators, and parasites, they are major determinants of the distribution and abundance of innumerable plants and animals. The majority of flowering plants, the dominant component of most terrestrial ecosystems, depend on insects for pollination and hence reproduction. As consumers of waste products, insects are essential to the recycling of nutrients. Humans and their agriculture rely heavily on such “ecosystem services” provided by insects, which together have at least an annual value of ∼$70 billion (2020 valuation) in the United States. Insects also provide humans with honey, silk, wax, dyes, and, in many cultures, food. Insects have become essential subjects in medical and basic biological research. Furthermore, insects are one of the most easily accessible forms of wildlife, with a diversity of morphology, life history, and behavior that seems ready-made for inspiring appreciation of nature and its conservation.’

So begins the final of twelve articles about insects in the 12 January 2021 Proceedings of the National Academy of Sciences of the USA. The articles arose from a 2019 symposium of entomologists concerned about the threats to insects globally. I cannot possibly begin to summarise the other articles but there’s a nice graphic depicting the global threats to insect diversity in one of them. The article quoted above includes eight simple actions that individuals can take to save insects from global declines:

Increase awareness and appreciation of insects:

The world’s fifty largest countries announced US$14.6tn of COVID-related spending during 2020. The vast majority was for ‘rescue’ efforts (such as JobSeeker/Keeper and reduced price meals and airfares) but of the US$14.6tn, 13% (US$1.9tn) was directed to long-term ‘recovery’ measures. So, ‘Are we building back better?’, the title of a recent analysis, is a timely question. Unfortunately the answer is not reassuring: only US$341bn (18% of the 1.9tn; 2.5% of the total COVID-response dollar) was for green recovery initiatives. Australia committed approximately 10% of our GDP to recovery measures and is in a group of four with Spain, South Korea and the UK that were well ahead of the rest. However, the percentage of Australia’s total recovery spend that was committed to a green recovery (approximately 3%) was one of the lowest. This places Australia very firmly in the group of countries that is missing opportunities to stimulate a green recovery in the areas of energy, transport, building upgrades, energy efficiency, research and development, and natural capital (see figure below). The last category includes investments in public parks, green spaces, tree planting, reforestation and ecotourism and is claimed to have the advantage of providing lots of jobs for low skilled people, increased resilience against pandemics and natural disasters, reduced air pollution and strengthened biodiversity. 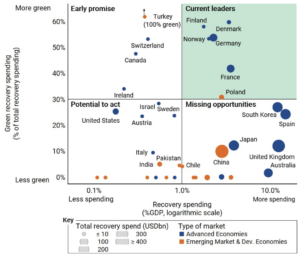 Australia’s electricity generation system is undergoing a transition – no one, not even the most rabid fossil fuel zealot, can deny that. Not unreasonably, the system’s managers, planners and operators are focused on maintaining a reliable supply during the next 10-20 years, the transition period. However, Tim Finnigan argues that there is now an opportunity to define the end-state of that transition and prepare a grid that is ready for the future, not just capable of handling the transition. Properly planned, the future zero emissions system will be more reliable, more secure, more flexible, more controllable, higher performing and more affordable. Finnigan’s paper includes a discussion of synchronous, virtual and zero inertia in the electricity grid for the engineering nerds among readers – this is way beyond my limited abilities. Not beyond my mental capacity is the very helpful figure Finnigan provides that compares characteristics of the old and future systems. 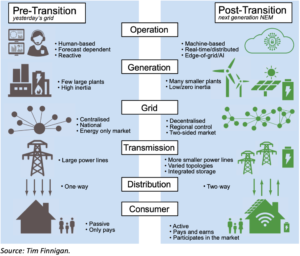 Parkinson goes on to be critical of the transition policies of Australia’s two major political parties – wrong policies and lacking urgency. Yes, there probably will be a little gas in the zero emissions world but not very much. Renewables will supply over 90% of electricity generation. ‘Let’s just accept this. We need to move fast. Seems pretty simple to me. Let’s do it’, concludes Parkinson.

In common with our mates in Europe, the USA and Japan, Australia, including the government and several high profile spruikers, is looking to catch the string attached to the rising hydrogen balloon. It’s clean (well, ‘green hydrogen’ is); it’s abundant; it’s transportable. But should the government be subsidising the development of the hydrogen industry with public funds? Here are some Do’s and Don’ts: 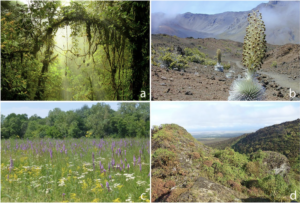