Sunday environmental round up, 29 November 2020

Despite COVID, atmospheric greenhouse gas concentrations continue to rise. Does increasing complexity in societies explain the collapse of civilisations? Western Australia is failing to adequately protect sharks and Australia is taking risks with imported flowers. China has an each-way bet on energy: big on renewables; big on coal.

The World Meteorological Association has issued an update on the levels of greenhouses gases in the atmosphere. The important point is that although daily greenhouse gas emissions were reduced by about 17% at the peak (or trough) of the global lockdown in April, the reduction in total emissions over the whole of 2020 is expected to be around 5%. The consequence, of course, is that the concentrations of CO2 and other greenhouse gases (principally methane and nitrous oxide) in the atmosphere continue to rise. Indeed, although the increase in atmospheric greenhouse gas concentrations during 2020 will be slightly less than it would have been without COVID, the difference will be within the normal year to year fluctuations caused by natural variability in carbon sinks such as vegetation. So, responses to COVID have affected economies far more than the environment.

The figure below requires a little study … but it’s worth it. The blue line shows the concentration of CO2 in the atmosphere between 1700 (when the concentration was approximately 270 parts per million) and 2019 (approximately 410ppm), an increase of 48%. The black line is the concentration of all greenhouse gases expressed as CO2 equivalents (like totalling US$100 + AUS$100 + £100 as if they were all US dollars). Here the concentration increased from about 270ppm in 1700 to about 500ppm in 2019, an increase of 85%. The red line shows the Annual Greenhouse Gas Index (AGGI), a measure of the actual global warming influence of greenhouse gases released between 1700 and 2019. The index was set at zero in 1750 and at 1 in 1990. It’s obvious that most of the greenhouse gases released into the atmosphere have been released since 1950 and that the index of warming has increased by almost 50% in the just the last 30 years; CO2 has been responsible for 80% of this increase. The hyperlink to the figure provides more information about the AGGI and also a detailed graph of the changes of each of the greenhouse gases between 1979 and 2019. The bottom line is that the situation continues to get worse; the rate of worsening is accelerating; and COVID really hasn’t changed anything at all. 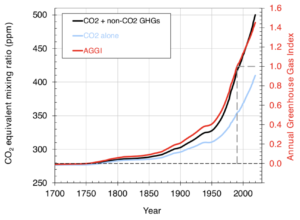 ‘The last time the Earth experienced a comparable concentration of CO2 was 3-5 million years ago, when the temperature was 2-3°C warmer and sea level was 10-20 meters higher than now. But there weren’t 7.7 billion inhabitants,’ said WMO Secretary-General Professor Taalas.

If you go around telling people that climate change will precipitate an environmental and human catastrophe that may reduce the human population to one billion or even destroy humanity completely, it’s inevitable that you will be asked 1) why do civilisations collapse?, 2) how will we know when society is beginning to fall apart?, and 3) what will actually cause the population to decline? Joseph Tainter posits that as civilisations develop they introduce increasing complexity – specialised roles, institutional structures and hierarchies of control to coordinate activities and solve the problems that inevitably arise. However, the increasing complexity also inevitably leads to diminishing marginal returns and challenges that were previously successfully handled (disasters, pandemics, insurrections, invasions) become unmanageable. Government begins to disintegrate, infrastructure (education, transport, power, waste) is inadequately maintained and begins to falter, internal conflicts arise, external threats become more threatening, trade and supply chains collapse, food supplies diminish, literacy declines, technological knowledge is lost, those with resources migrate and deaths increase. The crucial difference in the 21st century, of course, is that civilisations and the challenges they face are no longer ‘regional’ and ‘isolated’. It’s not the Minoan, Roman or Maya civilisation that will collapse and open a space for others to occupy. A collapse now will be global and affect all of humanity. The fourth question is the crucial one:  what should we be doing about it?

Many Australians are strongly opposed to the export of live farm animals because of the inhumane treatment the animals can receive during transit or slaughter overseas. Less well known is that live sharks are having their fins cut off in Australian waters so that the fins can be brought back to an Australian port for export. The disabled sharks are often left to die at sea. This can be prevented by requiring fishing boats to bring intact sharks back to port. Queensland has recently introduced ‘fins naturally attached (FNA)’ legislation. Western Australia is now the only Australian state or territory that allows shark fins to be removed at sea.

Importers and Australian government officials are on one side (‘Australia has strict biosecurity controls and there isn’t a problem’). Australian flower growers and invasive species experts are on the other (‘imported flowers often conceal very dangerous insects that can attack many of our home grown vegetables and fruits and controls are inadequate’). But a rectangle is a better metaphor than a dividing line. Australians love their cut flowers and customers are on the third side, looking for cheap, high quality flowers throughout the year. And the World Trade Organisation constitutes the fourth side with its strict rules for keeping restrictions on international trade to a minimum. With wage rates at around $2 a day (repeat ‘day’) in many developing nations, imports have pushed many local growers out of business (I believe the technical term for the transfer of work to countries with cheaper labour is ‘global labour arbitrage’) and the only way that demand, in terms of both price and volume, can be met is with imports. Following up on a recent 10-minute segment on Landline, Tim Low explains the risks in more detail.

The two figures below tell an interesting tale. In 2019 China had 27% of the solar power and 43% of the wind power installations in the world – impressive. On the other hand, in 2020 it had by a long chalk most of the world’s currently operating coal fired power stations and most of those under construction. 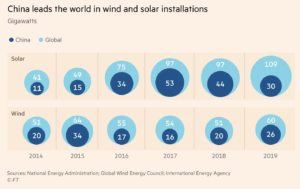 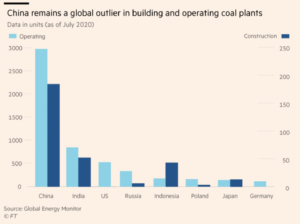