Sharan Burrow paints a picture of an inclusive future. Northern summers getting hotter but Australia’s environment deteriorates. Oil companies greenwashing activities exposed. Lessons from Germany about how to exit coal (if you want to, that is).

Please watch this 19 minute interview with Sharan Burrow, ex-Australian trade union leader and now General Secretary of the International Trade Union Confederation. It’s a tour de force that I cannot possibly summarise but Sharan covers, amongst other things, why climate is a labour issue (three hints: jobs, jobs and, oh yes, climate-friendly jobs), why we need a just transition for workers and communities and how this can be achieved (it’s all about security), repairing the broken, dehumanising labour market with universal social protection, and reversing the trends to inequity and authoritarian government. Sharan highlights the unregulated development and exploitation of workers by the global economy and its failure to protect people and nature, and the need for a strong commitment to diversity and inclusion, particularly for women, all racial groups and young people. ‘We have to fix the breakdown in the social model, we have to fix a broken labour market, and we have to fix the climate crisis. Otherwise, we cannot build an inclusive future. It is that simple.’ Shout it from the rooftops: ‘Sharan for PM’.

To mark Earth Day on 22 April 2021, the New York Times produced ‘The Science of Climate Change Explained: Facts, Evidence and Proof’, which provides ‘definitive answers to 12 big questions’ including:

I particularly like an animation (screen shots below) that shows how northern hemisphere summers have got hotter over the last 70 years. The whole temperature distribution curve has shifted markedly to the right and there are now about twice as many ‘Extremely Hot’ days as (previously referred to as) ‘Cold’ days. Even the ‘now’ in the last sentence is out of date as the five years since 2015 have been even hotter again.

Based on measures of floods, river flows, vegetation, soil health and the number of hot days, Australia’s environmental condition score fell from 3.1 (out of 10) in 2018 to 0.8 in 2019. This is the lowest score since the system’s inception in 2000. Only Queensland’s score (+0.1) improved. In fairness, there has been a lot of variation in the annual score since 2000 but more concerning than comparing one year with the next is that the scores for 13 of 15 indicators were worse in 2019 than the 2000-2018 average – mostly considerably worse (see below). Of particular concern is that 1890 species are now listed as ‘Threatened’ – 40 were added in 2019 alone – but only 41% have recovery plans, which should most definitely not be understood to be funded programs to implement the plans. While the report contains a wealth of information that it is important to monitor regularly, the numbers and graphics in even the 12 page summary are quite difficult to absorb. The conclusion is clear however: ‘Temperatures up, rainfall down, and the destruction of vegetation and ecosystems by drought, fire and land clearing continued’. And to quote the project director, Professor Albert Van Dijk, ‘Unfortunately, 2019 was neither an outlier nor the ‘new normal’. Instead it was just another step down on the continuing descent into an ever more dismal future – unless we finally take serious action’. 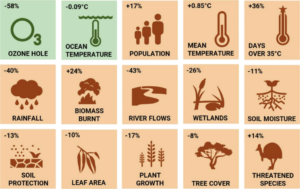 ClientEarth is a UK-based environmental charity that works throughout the world to tackle the climate and environmental crises by using the power of the law to transform industry practices and hold governments to account. For instance, in December 2019 they made a legal complaint in the UK against BP’s Possibilities Everywhere advertising blitz on the basis that the campaign was greenwashing that could mislead people that BP are a renewable energy company. Two months later the newly appointed CEO of BP announced that the campaign would be terminated. ClientEarth has now released the Greenwashing Files that expose how the advertising campaigns of nine large fossil fuel companies (including Aramco, Chevron, ExxonMobil, Shell and Total) do not match reality. The companies’ mass and social media campaigns create the impression that they are leading a rapid transition to low carbon energy and that their practices are in line with the Paris Agreement. In reality, however, the campaigns seek to distract the public by creating a misleading impression of the companies’ main activities and obscure the damage their products cause to people and planet. The companies’ real aim is to obstruct the world’s efforts to move away from fossil fuels.

Another example of ClientEarth’s work featured in the coverage recently provided by the ABC’s online news service and 7.30 Report of the threats posed to islands in the Torres Strait by climate change. Father Stanley Marama from Boigu Island and Sophie Marjanac, a ClientEarth lawyer, briefly described the case that eight Torres Strait Islanders have taken to the United Nations Human Rights Committee alleging that the Australian government is failing in its obligation to tackle the climate change impacts that threaten their homes.

Coal is still important in Germany: it supplies a quarter of Germany’s electricity; Germany is the fifth largest consumer of coal in the world; and coal industries directly employ 20,000 people. But Germany has a plan for a complete phase-out of coal power by 2038. No plan ever satisfies everybody (should be 2030, some said) but most groups seem to be on board with Germany’s coal exit plans. Apart from having a government that can see the writing on the wall and is prepared to take the appropriate action, how did they achieve this? Several elements seem to be crucial:

No one says that the transition to 100% renewable energy is going to be easy. But ignoring the realities, telling fibs and delaying the inevitable simply maximises the damage to individuals, communities and the environment and helps only those people who are prepared to sacrifice the community’s long term wellbeing for their own short term interests – not that I have anyone in particular in mind.

But when push comes to shove, I have to admit that Barnaby, Matt, George, Angus, Joel and Scotty are quite correct, coal does create jobs, as beautifully demonstrated by the picture below. This is indeed the future of work that we are all pining for, boys. Sharan Burrow would be proud of you all. 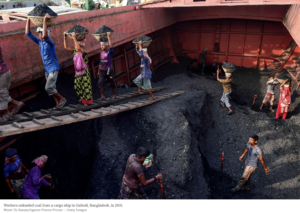