Sunday environmental round up, 30 August 2020

Food may be glorious but the way we produce and consume it can be bad for health and the environment. Unfortunately, we can’t even rely on national dietary guidelines to give us good advice. Shareholders want Whitehaven Coal to exit coal. McKinsey produces recommendations for a low-carbon, high growth recovery and electric cars can be part of that. Up to 10,000 koalas died in the bushfires but NSW continues to log their habitat.

The world’s food system generates about 25% of global greenhouse gases (GHGs). It is also responsible for considerable unnecessary disease and premature death, principally through its role in causing non-communicable diseases such as heart and vascular diseases, diabetes and cancer. In response to the health issues many countries have developed national food based dietary guidelines (FBDGs) which provide recommendations on healthy diets and form the basis for educational programs and national food and nutrition policies. An analysis of 85 nations’ FBDGs demonstrated that more than half of the countries had failed to implement any of their recommendations and none had implemented all of them. In addition, about a third of the recommendations were not consistent with good prevention of non-communicable diseases and about three-quarters were incompatible with environmental targets such as the Paris Climate Agreement. Better implementation of the FBDGs had the potential to reduce premature mortality and GHG emissions by about 15%.

In comparison, adoption of the recommendations in a report on healthy and sustainable food prepared for the medical journal The Lancet in 2019 would produce on average one third larger reductions in premature mortality and three times greater reductions in GHGs, much more in line with international targets. The greatest health and environmental gains would be made from reducing red meat intake to one serve per week (thereby reducing GHGs and the use of cropland, freshwater, nitrogen and phosphorous) and limiting dairy intake to one serve per day. Unfortunately, many of the developing countries’ FBDGs recommended increasing dairy intake. The Lancet report also noted that reducing the intake of sugar, grains and potatoes would limit excess energy intake and produce environmental benefits. The environment and population health of all countries would benefit from making their FBDGs more consistent with the Lancet report’s guidelines.

Nitrogen is essential for life but you can have too much of a good thing. Worldwide, there are over a thousand coastal areas where fish can’t breathe – no oxygen. In the 1960s there were a few dozen small marine dead zones; in 2008 there were about 400. They are increasing in size and number. The cause of this marine vandalism is nitrogen from fertiliser flowing off the land, down the river systems and into the sea. Between 1950 and 2000 the annual use of synthetic nitrogen fertilizer increased globally from 4 to 83 million tonnes – of which only 20% ends up the food we eat. The rest stays in the environment. The nitrogen that enters the sea causes an overgrowth of phytoplankton that vastly exceeds the appetite of the species that feed on it. A massive amount of organic matter then falls to the seabed where it is decomposed by microbes in a process that consumes so much oxygen that the whole area can no longer support life. Fish swim away but less mobile creatures die. The solution is to eliminate our dependence on a few global agribusinesses that profit from industrialised farming that is totally reliant on their products: seeds, antibiotics, pesticides, machinery, and fertiliser.

Whitehaven Coal may have got approval to extend the life of their Vickery coal mine in NSW for another 30 years but not all their shareholders are keen on the idea. A hundred shareholders have tabled a motion for Whitehaven’s next AGM that calls on the company to develop a plan to wind up its coal production in line with the goals of the Paris Agreement. The evidence is clear: if we are to keep global warming under 1.5oC, or even 2oC, most of the coal that’s still in the ground has stay there. But there’s a second reason for Whitehaven to exit coal. It’s a dying industry and that makes it a poor financial investment for the company and its shareholders. In July 2018 Whitehaven’s share price was $5.90 but it has fallen steadily since then and is currently under 90 cents. Shareholder activism has grown in Australia over the last ten years and it’s no longer just troublesome climate activists buying a few shares so they can stir the pot at companies’ AGMs. Institutional investors such as superannuation funds with large numbers of shares are increasingly supporting these motions because they want the miners to choose: develop plans to get out of coal or we’ll protect our members’ pensions by selling the shares and buying into other companies with better long term prospects. The chart below shows the increasing number of climate-related shareholder resolutions at Australian fossil fuel AGMs over the last decade and their rapidly increasing shareholder support. (A more analytic view of shareholder activism’s effectiveness was published in The Conversation this week.) 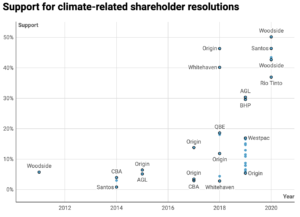 McKinsey have produced a short report strongly advocating a low-carbon, high-growth  post-COVID recovery: ‘a climate-smart approach to economic recovery could do much to put the world on an emissions pathway that would hold the average temperature increase to a relatively safe 1.5oC‘. According to McKinsey, government spending on renewable energy and energy efficiency creates five more jobs per million dollars spent than spending on fossil fuels. Using a European example, they identify twelve low-carbon stimulus measures that create 13-25 jobs per million Euros invested. The ones with the potential to create the most jobs are retrofitting houses for energy efficiency, accelerating the roll-out of wind and solar power, reinforcing the electricity distribution grid to support widespread electrification of industry, transport, etc., and creating bus rapid transit and urban rail schemes.

If one in four cars in the USA became electric, the USA would save Aus$24 billion per year even with the USA’s electricity supply mix in 2014 when renewables provided approximately 13% of electricity supply (17.5% in 2019). How do the savings occur? By preventing heart and lung disease and the associated 530 premature deaths per year caused by the very small particulate matter (PM2.5) and ozone precursors pumped out by petrol and diesel guzzling cars. With double the renewables in the electricity supply and three in four cars becoming electric, almost Aus$100 billion per year would be saved and 3,300 premature deaths avoided. In addition, there would also be reductions in CO2 emissions, ranging between 200 and 800 million tons per year. It’s worth noting that although heavy duty vehicles emit more pollution per kilometre travelled than light duty passenger vehicles, 60% of transport-related greenhouse gas emissions in the USA come from light vehicles.

During last summer’s bush fires 5-10,000 koalas died and over 30% of their remaining habitat was destroyed. This 3-minute video shows the ongoing destruction of some of the last unburnt koala habitat by logging in the Lower Bucca State Forest near Coffs Harbour. Still, you can never have enough palettes and wood chip from native forests, can you. And what would we do with all those landfill sites if we didn’t fill them with our old growth forests? 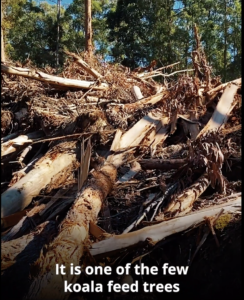