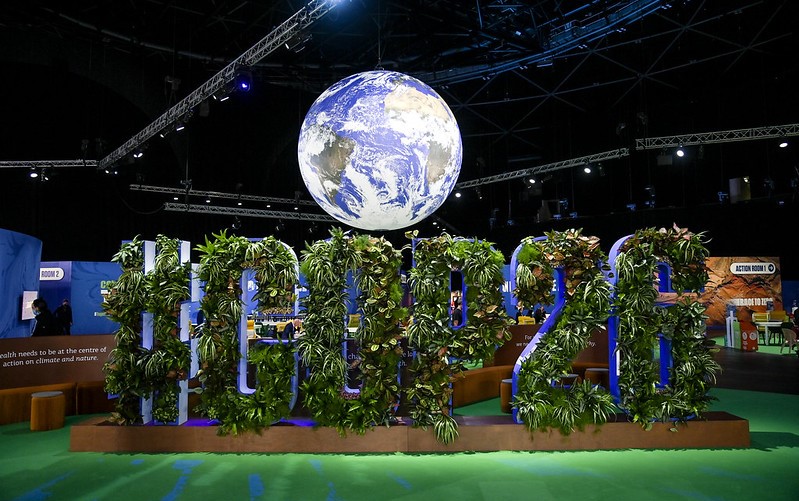 Can capitalism deliver green growth? And if it can, will it while the fossil fuel industry controls governments? Baby sawfish rescued in northern Australia. CO2 causes climate change but climate change increases the CO2 in the atmosphere.

Can capitalism deliver the goods for the future?

Well done to John Menadue for recently publishing together Jeffrey Sachs’s and Chandran Nair’s contrasting pieces about net zero by 2050. Both contain a lot of sense and are in some ways complementary, although Nair identifies some absences in Sachs’s argument.

Personally, I don’t know whether capitalism has the economic tools to produce economic growth and an environmentally sustainable world; I am very doubtful. Sachs — and others who share his views, e.g. Gittins, Garnaut and Carney — clearly think it can. That is, they believe that are no economic or technological problems to achieving net zero by 2050 and that the quinella, economic growth and environmental sustainability, will be there for all to enjoy. In fairness, they all also express great concern with current levels of inequity both within and between nations and want it to be tackled. In essence, though, ‘green growth’ promoters think that monopoly capitalism spread across two hundred fractious nations can be turned into capitalism with a green and human face in a relatively harmonious world.

This is all well and good but what is always lacking from such commentaries is any recognition that a democratic (truly democratic, that is), peaceful, equitable, environmentally sustainable world is unlikely to be produced solely by relying on the market, new technologies and better politicians (ones with more honesty and integrity would be a start, but I digress). A prerequisite for producing and maintaining such a world is new relationships: new relationships between humans and nature, and new relationships among humans themselves.

With regard to humans and nature, we must move beyond the relationships that characterise capitalism, relationships based on a Cartesian (it and us), extractive, nature-to-be-tamed and used as a resource for humanity worldview. Regarding relationships between human beings, we must abandon the exploitative, competitive rather than cooperative social relations that are characteristic of capitalism. The relationships created between buyer and seller, between capitalist and worker, and between coloniser and colonised do not look like good models for the future.

So for me, the crucial question is not whether capitalism can produce the necessary technology (we know it can) but whether capitalism can produce the changed relationships between humans and nature and between humans themselves that will be necessary for a democratic, peaceful, equitable, environmentally sustainable global human society. When Sachs, Gittins, Garnaut and Carney provide capitalism’s road map for these changes, then I might start to believe. Until then, I’m worried that we’re heading down a dead end metaphorically and literally.

There’s been a massive meeting of fossil fuel flunkies going on in Glasgow over the last two weeks: over 100 fossil fuel companies and 30 trade organisations represented by over 500 executives and lobbyists. This hasn’t been in parallel to the COP meeting, it’s been inside it. If Fossilfuel were a country (flag consisting of dead bodies on a black background; motto “Profit before People”), it would have been the largest delegation at the COP meeting. Twenty-seven real countries even have registered fossil fuel lobbyists in their official delegations. And of the 35 countries that had stands in the conference centre to promote their green credentials only two mentioned the need to cut fossil fuel production. And these two were hardly displaying exemplary behaviour. Denmark’s stand did not mention their role as the largest oil producer in the EU and South Africa’s was sponsored by three coal giants. The photo below shows Australia’s stall promoting Santos’s carbon capture and storage scheme. 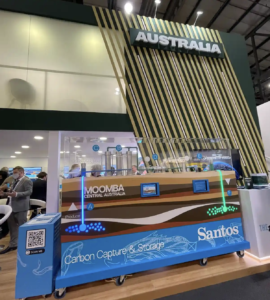 Little wonder there’s no mention of fossil fuels in the Paris Agreement or that agreeing to any truly ambitious targets and strategies is so difficult for the negotiators at COP meetings.

I couldn’t care what Morrison says or promises on climate change (or Albanese for that matter), nothing meaningful, and I mean nothing, will happen to reduce our production and use of coal and gas until the government and two largest political parties sever all links with the fossil fuel industry: no political donations, no fossil fuel subsidies, no revolving door of staff, no gas company executives on government advisory committees. 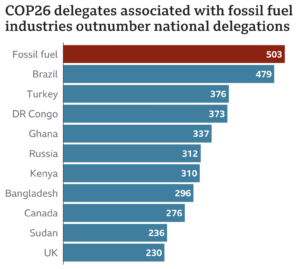 The list of countries with the largest official delegations in Glasgow is remarkable in itself. Nine countries have more delegates than the host nation. Perhaps they didn’t research Glasgow’s November weather before booking their flights. You’d need to know the CVs of the 100 or so Australian delegates to know if any of them has strong links to the fossil fuel industry — well, we do know about Scotty and Angus Taylor of course.

Sawfish are critically endangered globally. They’ve been driven to the brink by habitat loss and fishing. This short video shows Malak rangers working with Dr Peter Kyne from Charles Darwin University to rescue baby sawfish from drying water holes in the Daly River region of northern Australia. The work is a great example of collaboration between Traditional Owners, an environmental NGO and a university. The historical photos of dead sawfish around the 1.40 minute mark are heartbreaking. 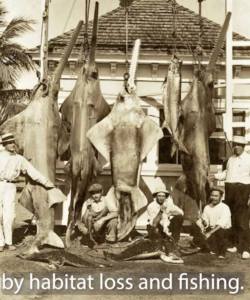 I think it’s reasonably well understood that not all the CO2 that humans belch into the atmosphere stays in the atmosphere. Approximately half stays there, a third is absorbed by vegetation and the land, and a quarter is absorbed by the oceans. What I have recently learnt is that the amount that stays in the atmosphere (the airborne fraction or AF) varies quite a bit from year to year. Over the last 60 years the AF has averaged 42 per cent but it has oscillated in the range 20-80 per cent, with no discernible trend over time. The significance of this is that projections of the levels of CO2 in the atmosphere, and hence of global warming, are to some extent dependent on the AF and ongoing climate change may affect this figure. For instance, more frequent droughts and bush fires might reduce the CO2 absorbed by land based ecosystems, and marine ecosystems might also absorb less CO2 as a result of higher surface temperatures, more acidic seas and slowing of some ocean circulations by melting sea-ice. The result will be more CO2 left in the atmosphere and more global warming. A vicious circle.

The same World Meteorological Organization report that revealed that little gem also reports that the atmospheric levels of the three main greenhouse gases, CO2 (responsible for 66 per cent of global warming), methane (16 per cent) and nitrous oxide (7 per cent), all reached new highs in 2020. Between 1990 and 2020 the heating of the Earth generated by the presence of the greenhouse gases increased by 47 per cent, with CO2 accounting for 80 per cent of this. The increase in 2020 compared with 2019 was almost 2 per cent. Conclusion: things are not getting any better despite all the hoopla about the competitiveness of renewables and commitments to net zero by 2050. Nor are they likely to improve in the foreseeable future no matter what is promised and signed off in Glasgow.

The winning photos in Birdlife Australia’s 2021 photography awards are stunning. For total commitment, patience and persistence, and considerable skill, the image by Steve Nicholls of a welcome swallow just about to grab an insect in mid-flight is unbelievable for its clarity and drama. His picture of a swallow drinking ain’t half bad either. 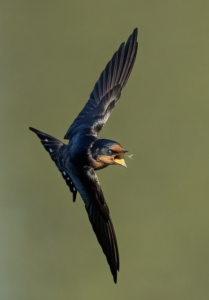