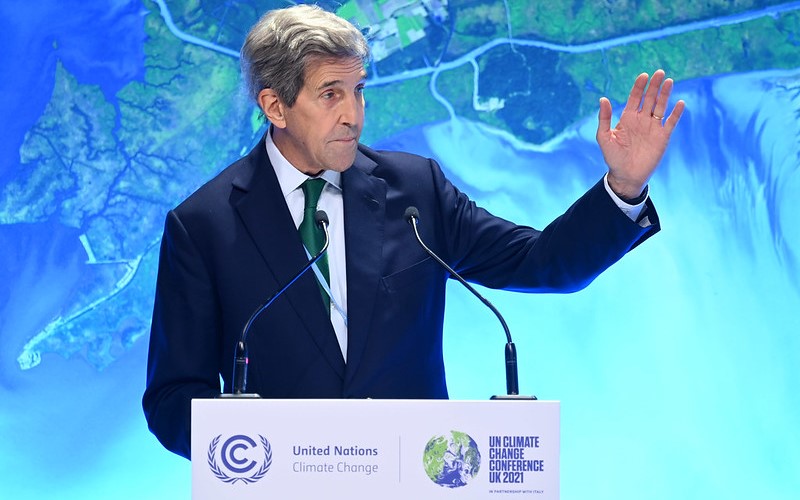 COP26 is finished but are we any closer to reducing emissions? Global temperatures rising and supplies of fresh water falling.

Some helpful developments for the climate at the COP meeting but fossil fuel companies and the rich still control emissions. Potable water in short supply but not water-related disasters. A poet apologises to the kids.

Australia’s climate inaction repeatedly drew the wrath and derision of civil society groups and others more directly involved with the negotiations at the COP meeting. With one gold medal and four silver and bronze in the daily Fossil of the Day Award, it was not surprising then that we pipped the USA and UK to the overall Colossal Fossil Award for worst overall performance in Glasgow. Here are the lowlights that secured Morrison and crew — because, credit where it’s due, it is they who deserve the awards, not the whole of Australia – the accolades:

I do not have any faith in the ability of multilateral diplomacy and COP meetings, with their agreements, pacts, statements, etc., to keep global warming under 1.5 degrees Celsius. As we saw in Glasgow, the governments of the fossil fuel producing and consuming nations are too much under the influence of fossil fuel companies to make the radical changes necessary in the current decade. Starting with the premise that it’s a lack of will not technology that is the problem, I personally see only one possible, very narrow, route to staying under 1.5C: the USA and China putting aside all their other differences and working together to drag and bully nations into abandoning fossil fuels as soon as possible. Bearing in mind that they each have their own massive fossil fuel problems, this will not be easy but it’s probably our only hope. A joint China-US push would not be unprecedented — they cooperated before Paris in 2015 and they came together to make an announcement in Glasgow earlier this month. The significance of the recent announcement is not what it said but that China and the USA felt the need to say something together.

John Kerry and his Chinese counterpart Xie Zhenhua will be crucial to any such Sino-US cooperation. Kerry spoke in London a few days before Glasgow. He clearly understands the climate science, the dangers of global warming, the diplomatic barriers to climate action and who has responsibility for leading the way. Bearing in mind his critical potential role, I have provided below some lengthy quotations from his recent speech:

“In the course of public life you’re called on to make a lot of choices. Some are hard, where the costs and benefits are closely balanced. This, my friends, is not a hard choice. Addressing the climate crisis is the only choice. In every way, the cost of inaction is far greater than the cost of action.”

“We no longer need scientists to tell us what will happen, because we see it happening — for ourselves, now. Here in the UK, in July the Met Office issued its first ever ‘extreme heat warning’ as a deadly heatwave took hold. In Germany, unprecedented floods killed almost 200 and swept away homes and bridges. In my country, a supercharged storm drowned people in their basements in New York City months after more than 150 froze to death in Texas. The rainforests of the Amazon are burning and being deforested at the rate of 10,000 acres a day. Ten million people a year already die from air pollution. Another 5 million die because of heat. The planet is already at its hottest and least stable point in 125,000 years — and people are dying because of it. That’s with just 1.2 degrees of warming. Some of these impacts are already irreversible. Without dramatic action, they become unliveable.”

“That is what makes this the decade of decision — and now we must make it the decade of action. To prevent catastrophe, the scientists tell us we must cut global greenhouse gas emissions at least 45 per cent by 2030 and get to net zero by 2050.”

“But let’s be clear. Despite all the momentum heading into Glasgow we still face a gap. We have to be honest about it. Everything I have said is why I believe we can overcome that gap — but it will take all of us. The world must work together to close this gap — but particular responsibility lies with the top 20 economies on earth which are responsible for 80 per cent of emissions.”

“We are not just talking about statistics. We are talking about families. Parents and children and neighbours and friends. Their lives matter to us. This is what we mean when we talk about a ‘just transition’.”

That was all pre-COP. Lesley Hughes and Wesley Morgan have provided a snappy summary of  the wins and losses for the environment and humanity in Glasgow.

Monbiot: the rich cost too much

“Most of our dysfunctions are caused by pandering to the rich” says George Monbiot: e.g. the erosion of democracy, exploitation of workers and tenants, profiteering during Covid, destruction of public services by privatisation, and climate change and degradation of the natural environment. The world’s richest 1 per cent produce twice as many carbon emissions as the poorest 50 per cent. The richest 10 per cent alone will consume all the world’s carbon budget to 2030. Twenty billionaires each produce an average of 8000 tonnes of CO2 per year, 3500 times their fair share if we are to stay under 1.5C: their planes and yachts are the main problem. Monbiot concludes that “It is not humanity as a whole that the planet cannot afford. It’s the ultra-rich.”

The World Meteorological Organization’s (WMO) 2021 State of Climate Services: Water paints a pretty grim picture. Only 0.5 per cent of the water on Earth is usable and available as freshwater, and it’s decreasing. Currently, 3.5 billion people have inadequate access to water for at least one month a year; by 2050 this will have blown out to 5 billion.

Between 1970 and 2019 there were 11,000 global disasters related to weather, water and climate resulting in two million deaths and economic losses of $US3.6 trillion. Droughts (a particular problem for Africa) were the deadliest disasters … 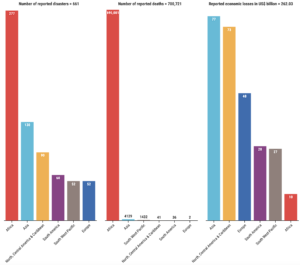 … and floods (a particular problem in Asia) the costliest: 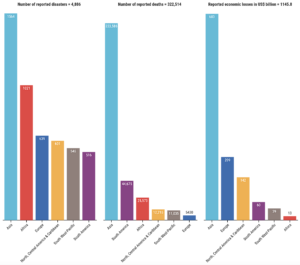 Since 2000, flood-related disasters have increased by 134 per cent and droughts by 29 per cent. And while, as ever, the poorest, least-developed countries are at greatest risk and least able to respond, the severe floods in Brisbane in 2011 and in Germany in July this year remind us that nowhere is safe.

Many countries, particularly in the Global South, are not prepared for water-related disasters and 107 countries are not on track to have sustainably managed water resources by 2030. Women and vulnerable groups experience particular problems accessing fresh water but are often absent from decision-making.

An extract from The legacy by Marge Piercy:

What a world we’re leaving –

I want to apologize to every

child I see. Yes, we baked it,

poisoned it, gutted it, cooked

to leave you a liveable world.

We were just too busy buying

and selling, polluting and burning.

We were just too greedy to care.

Who emits the most?

Returning to Kerry’s point about the rich economies having prime responsibility for climate action, the 23 rich developed countries are responsible for half of all historical CO2 emissions, Australia coming in eight with 1.1 per cent of the total. Comparing the total annual CO2 emissions of the currently biggest emitters, a mix of rich and developing countries, with their emissions per capita shows an interesting picture (figure below). Only Kerry’s USA is a high performer on both measures (and it’s still by far the world’s largest historical emitter). Australia is 15th on total emissions but second on per capita emissions, bested only by that purchaser of our military hardware, staunch defender of human rights, and climate laggard colleague, Saudi Arabia. 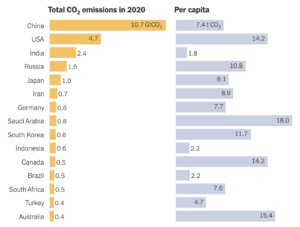