Sunday environmental round up, 6 December 2020

‘Nature-based solutions’ is a term that has entered the climate activism lexicon in recent years. Although the concept is still evolving, it refers to ‘actions to protect, sustainably manage, and restore natural or modified ecosystems, that address societal challenges effectively and adaptively, simultaneously providing human well-being and biodiversity benefits’. Examples might make that mouthful clearer:

When successful, nature-based solutions (NbS) can provide integrated benefits across a range of dimensions, e.g., water, food, energy, health, climate change mitigation and adaptation, biodiversity and the economy. While the private sector and communities have clear roles in NbS, only national and state governments and intergovernmental organisations have the political power and resources necessary to implement NbS at the required geographic scale and over long enough time periods. That is why a recent report has focused its NbS recommendations on the G20 nations:

The report recognises that NbS is not without its critics – indeed, there are vigorous debates within the environmental movement about the degree to which environmental organisations should support NbS. At a practical level, there is justifiable concern that companies and governments will promote NbS to cover up their lack of action on mitigation and/or will maximise financial returns over environmental benefits, with tree planting particularly vulnerable to scams and exploitation. More philosophically, there is concern that NbS commodifies nature, emphasising its economic rather than its intrinsic value.

To finish with one astonishing gobbet of information from the NbS report, 70% of forest is now less than 1km from a forest edge.

Here’s another example of an NbS but you have to suspend your cynicism for three minutes and focus on the important message – pollinator-friendly solar farms can be good for the solar farm, the surrounding farmers, biodiversity, bees and apiarists. If, however, the BP schmaltz is too much for you, have a look at this pollinator-friendly solar scorecard that has been developed to combat the greenwashing that is almost certain to accompany roll out of this idea.

The UN Environment Program (UNEP) has released its second Production Gap report, the report that identifies the gap between what coal, oil and gas producing countries plan to produce in the next ten years and what they’d need to produce to keep global warming under 1.5oC. The bottom line is that there needs to be a 6% per year reduction of production between now and 2030 but the countries are planning a 2% per year increase, with governments so far committing 50% more COVID recovery funds to fossil fuels than to clean energy. For a little more information you have a choice between the written word, a video (under 2 minutes) and an animated infographic (1 minute). The report recommends six areas of action to governments: use COVID recovery funds to support the achievement of climate goals; support fossil fuel dependent communities to make a just transition away from fossil fuel industries; reduce government support for fossil fuels; restrict new fossil fuel production; make fossil fuel production levels transparent; and act collectively.

The Australian Institute of Health and Welfare has produced a report on the short-term (September 2019 to March 2020) health effects of the 2019/2020 bushfires. Briefly:

Tim Buckley, who to the best of my knowledge has not been noted for being a spruiker for the energy policies of the current or previous NSW governments, has delivered an extremely favourable opinion on the recently released NSW Electricity Infrastructure Roadmap. The roadmap, approved with (nota this bene!) bipartisan support in the NSW Parliament, promises to deliver the electricity holy trinity: lower cost, reliability and low emissions. Buckley’s summary: ‘The NSW Electricity Infrastructure Roadmap is exceptionally well thought through. […] The employment, export and investment opportunities are huge. Consumers will benefit. Downstream industry will be rejuvenated after a decade of fossil fuel-driven energy cost inflation.’ To avoid accusations of parochialism, part of my reason for covering the NSW electricity plan is that it has serious implications for other states and territories. Buckley’s piece also includes this pithy image: ‘aluminium is little more than alumina and solidified electricity’.

A propos of nothing, the picture below is worthy of a Christmas cracker. Well, someone’s got to be joking. 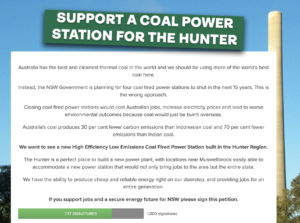 They may look like reptiles but pangolins (or scaly ant-eaters) are mammals, the only ones that are covered with scales. They are also the most trafficked mammal in the world, highly valued in some Asian countries, particularly China, for ornament and the alleged medicinal qualities of their scales, meat and organs. Although the Chinese government claimed earlier this year, in response to the COVID pandemic, to have removed pangolin scales from traditional medicines, this is far from correct. Over 200 companies are still licensed to sell pangolin scale products. Over 60 companies still list pangolin as an active ingredient in their products. Over 50 companies are actively advertising medicines claiming to contain pangolin. The Chinese government says that the scales come from a national stockpile – a stockpile that probably serves as a smokescreen for ongoing illegal activity and may never run out. Unfortunately, pangolins are just one of several threatened wild animals – e.g. leopards, tigers, bears, rhinos, elephants – that are legally traded, and often bred in appalling conditions in captivity for their body parts, in China.