Sunday environmental round up, 6 September 2020

COVID is increasing deforestation but the Australian government moves rapidly to put fast-tracked development above the environment. Computer geeks start monitoring the sources of CO2 emissions and Indigenous groups use the law to challenge governments to protect their lands and lives. Sharks mount a media campaign to improve their image.

How many pathways are there for COVID to increase deforestation? (unfortunately behinds a paywall) Plenty: collapse of local economies prompting villagers to log forests to sell the wood for income or burn it for fuel, or to clear land for food crops; illegal logging, mining and agricultural companies taking the opportunities presented by decreased environmental monitoring and law enforcement; legitimate companies withdrawing from deforestation pledges because of alleged budgetary problems; and let’s not forget government encouragement, as in Bolsonaro’s Brazil. All this adds up to a greater than 50% increase in deforestation in South America, Africa and Asia compared with the 2017-19 average since the start of the pandemic. Apart from the damage to local environments and ecosystems, deforestation increases greenhouse gas emissions and decreases the ability of forests to mop up CO2 from the atmosphere. But it’s no use the West promoting nature-based solutions to the climate crisis and getting all holier than thou about greedy multinationals, government incompetence in developing countries or desperate locals in faraway places. Wealthy nations must provide financial and other resources to help poorer, developing countries preserve their remaining forests. Now … it’ll be too late in 20 years.

Graeme Samuel is due to deliver the final report of his review of the Environmental Protection and Biodiversity Conservation (EPBC) Act to the government next month. So, asks Geoff Cousins, ‘… what possible justification can be given for ramrodding legislation into the parliament now? Just one, it seems. The environment minister, Sussan Ley, puts it succinctly: “It will allow projects to be fast-tracked.” So that is the justification for what the government touts as a new age of environmental legislation. Not to protect the natural world in any way; not to deal with climate change issues in any way; not to aid a new vision for the use of changing technologies and their integration into our systems; not to lessen the terrible devastation of the Murray Darling or the constant loss of habitat for threatened species; not even to try to alleviate the rapidly increasing impact of our bushfires.’ The straight-talking Cousins goes on to posit that the government falsely believes that an economy is an entity to itself, independent of the world in which it lives, rather than ‘the sum total of human endeavour at any given time’. OK so far, Geoff, but I’d suggest that this government sees the economy simply as the tool by which it can help its mates make lots of money.

We can scientifically measure the concentration of CO2 and other greenhouse gases in the atmosphere but it’s difficult to know exactly where the gases originate. What knowledge we have about source relies on self-reporting by companies and nations, a process marred by genuine uncertainties, variable methods, lack of verification, time lags, and downright dishonesty. This is all about to change with the launch of ‘Climate TRACE’ (Tracking Real-time Atmospheric Climate Emissions), a coalition of ten organisations with Al Gore pushing things along. Greenhouse gas emissions from every sector worldwide, even down to individual factories and ships, will be monitored in real-time using artificial intelligence, satellite imaging, machine learning and land- and sea-based sensors. Farewell to faking, hiding and feigned ignorance; welcome transparency and accountability. And not only for emitters. The system will also monitor the performance of carbon offset projects, such sustainable forestry and regenerative agriculture, in removing carbon from the atmosphere. Zebra Finch recognition a couple of weeks ago. Greenhouse gas sources this week. Is there nothing computer geeks cannot do?

Indigenous groups around the world are increasingly taking legal action to protect their traditional lands from the causes and effects of climate change. In Alaska the Gwich’in Steering Committee which represents tribes that depend on caribou has joined environmental groups in suing the USA’s government to prevent them opening the Arctic National Wildlife Refuge to oil and gas drilling. In the Torres Strait sea level rise is increasingly threatening the Islanders’ culture and ability to live on their lands. Last year concerned Islanders lodged a complaint with the UN Human Rights Committee alleging that the Australian government is failing in its duty to protect the area’s climate-vulnerable communities. The government has recommended that the Committee dismiss the complaint; first, because the complaint concerns future risks rather than any current impacts; and second, because effects of climate change on Australian citizens are not the government’s responsibility. Sorry, run that past me again. Well, Australia is not the only contributor to global warming, is it? In Queensland the Wangan and Jagalingou People served an eviction order on Adani and blocked the access road to the developing Carmichael mine with a spirit fire, which the Queensland Police forced the protesters to remove a few days later. This third example perhaps represents more of a rejection of legal authority than a use of it.

I mentioned heat waves and the urban heat island effect recently. An article in the USA’s version of The Conversation presents a nice summary of many related issues. In particular, the increasing incidence of heat waves over the last 20 years; the devastating heat waves in Chicago (1995, 739 died), Europe (2003, 70,000 died) and Russia (2010, 56,000 died); the exacerbating effects on human health of high humidity, high night time temperatures and the length of the heatwave rather than the maximum temperatures reached; how to spot heat exhaustion and heat stroke and what to do about it; and advice on how communities should organise when a heat wave is coming. (As an aside, I’m not too sure about the claim that our ancestors on the African savanna ran down prey in long midday chases. Humans have large brains – not always used to best effect, I agree, but nonetheless – wouldn’t they have learnt very early to use their superior smarts rather than their inferior speed and stamina??)

Disappointed with ongoing bad publicity and indifferent landlubbers, Australia’s shark community has parted company with its longstanding PR company. The Australian Marine Conservation Society and the Humane Society International have won the contract to improve the sharks’ image and started with a video to help protect them from over-fishing, culling programs and habitat loss. They’re even inviting you to become a Shark Champion. 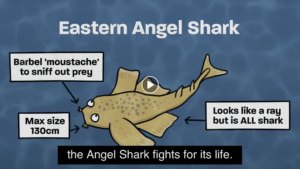