Sunday environmental round up, 7 March 2021

UK’s and Canada’s ‘Powering Past Coal’ promises look hollow, as do many companies’ ‘net zero’ commitments. Ecosystems already collapsing globally and in Australia. EVs and loose leaf tea are better for the environment. And a historical quiz.

At the 2017 climate change (COP) meeting in Bonn, the UK and Canada jointly founded and launched the Powering Past Coal Alliance (PPCA), a collection of 30 or so countries, states and cities committed to ‘phasing out traditional coal power and placing a moratorium on any new traditional coal power stations without operational carbon capture and storage … through policies (whether public or corporate, as appropriate) and investments, and restricting financing for traditional coal power stations without functional CCS’. The Alliance now has about 70 government members but its two founders and co-chairs have been accused of rank hypocrisy for allowing new coal mines to be developed. Turns out that the name of the Alliance and its goals were very carefully worded as the UK and Canada are defending themselves by emphasising that coal for industrial purposes and mines with carbon capture and storage (not withstanding its low success – my comment, not the PPCA’s) do not fall within the Alliance’s work. The UK and Canada are also currently third and fourth on the list of leading financiers of the global coal industry. As the Alliance’s critics point out, coal is coal and emissions are emissions. Basically, most governments still don’t get it or they do get it but aren’t prepared to do what’s needed to avert the looming disasters. The only real difference between the rich nations’ governments is how much they are prepared to do to make it look as though they are doing enough. None of them is actually doing enough.

Moving from governments to companies, an increasing number of fossil fuel companies are announcing ‘net zero’ targets. Basically, they’re saying ‘we’ll keep producing coal, oil and gas so that greenhouse gas emissions keep being pumped into the atmosphere but we’ll find some phoney tree planting and carbon capture schemes that can’t be accurately measured to make it look (that word again!) as though the emissions from our products are being balanced by absorption of the nasties’. The production and supply of fossil fuels have to be curtailed rapidly to stand any chance of keeping warming manageable. A Fossil Fuel Non-Proliferation Treaty has been proposed to achieve this:

An article in New Scientist provides a very brief but nonetheless informative summary of how we have manufactured the triple crises of loss of biodiversity, climate change and COVID. And we’ve done it so efficiently: ‘If you compare Earth’s history to a calendar year, we have used one-third of its natural resources in the last 0.2 seconds’, according to Antonio Guterres. To respond to the loss of biodiversity, the author asserts that conservation of environments and ecosystems is no longer enough, ecosystem restoration will be the key to success and the article provides a particularly useful list of ‘Degraders’ that must be stopped and ‘Restorers’ that need to be promoted for a range of ecosystems. To illustrate:

Ecosystem collapse is a very pressing issue for Australia, highlighted during the past week by a report identifying 19 of our own ecosystems that are already collapsing and unlikely to recover. As the report’s authors said in an article in The Conversation: ‘the current changes across the continent, and their potential outcomes, pose an existential threat to our survival, and other life we share the environments with.’ I strongly recommend this article for the brief description it contains of the 19 ecosystems and the major pressures each one faces. For a snapshot of the location of each ecosystem though, the map below is helpful. 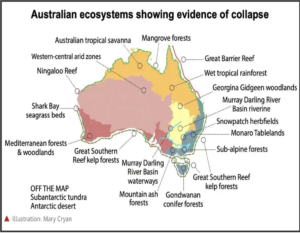 So, are electric vehicles really better for the environment than petrol and diesel vehicles? The answer seems to be an unequivocal ‘yes’ but how much better depends. Plus, there are some concerns that need to be sorted. Clearly, if your EV is being charged with electricity generated completely by fossil fuels, there’s probably not much of an advantage for global warming. However, most power systems now are a mix of fossils and renewables and so EVs do result in the emission of fewer greenhouse gases and, importantly, fewer other air, land and water pollutants. This will get better as renewables increase their share of electricity generation, particularly as coal disappears. Then there are the raw materials that go into the batteries. Cobalt tailings and slag heaps are particularly hazardous  for the health of local communities and there are serious human rights concerns in the mines of the Democratic Republic of Congo where 70% of the world’s cobalt originates. Lithium mining, principally in Australia and South America, uses large amounts of groundwater which can reduce its availability to local farmers. China is the main source of rare earths, the mining of which can produce radioactive  water and dust. Manufacturers, miners and governments need to work together on technological and human rights responses to eliminate all these problems. Finally there’s the problem of spent batteries. Recycling rates for lithium-ion batteries are dismal (5%) and this needs to improve to recapture the reusable components and/or give spent batteries a second life as storage units on the electricity grid.

Craig Reucassel focused Australia’s attention on the landfill problems associated with non-recyclable takeaway coffee cups.  But there’s also a problem with tea bags, of which Australians consume something like 25 billion per year (my best ballpark estimate). If you’d like to reduce the unnecessary packaging, waste and landfill and drink fresher, better tasting tea with more regional variation (like wine), forsake the tea bags and drink single origin, loose leaf tea. You’ll also be doing more for the welfare of the communities where tea is grown and getting better value for money – paying for the tea, not the packaging.

What’s the link between the reclining gent, the yellow Acacia, the pink Boronia and the towering Eucalypts? 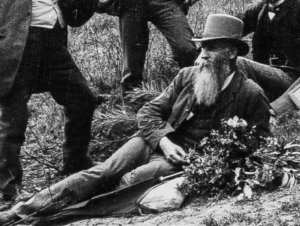 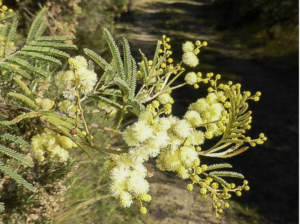 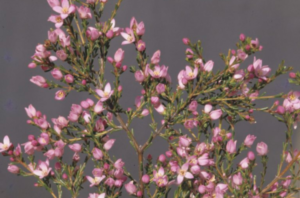 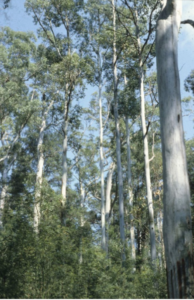