Sunday environmental round up, 8 November 2020

Wind and solar are getting cheaper and cheaper and financial institutions and countries are increasingly turning away from fossil fuels, but 100% renewable energy is a long way off. Protecting wild places and returning agricultural land to nature can prevent biodiversity loss and help tackle climate change.

While it’s useful to compare the current operating costs of generating one unit of electricity (a megawatt-hour – MWh) by existing coal, oil, gas, nuclear, wind, solar and hydro plants, it’s more useful to compare the ‘levelised cost of energy’. The levelised cost includes not only today’s operational costs but also the cost of building, servicing and decommissioning the plant throughout its entire expected life. The average global levelised costs of utility-scale solar, wind, coal and gas in US dollars in 2009 and 2020 are shown below. 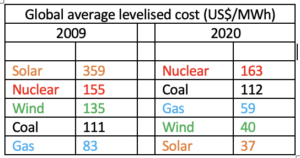 The levelised cost of nuclear and coal have changed very little over the 11 years but the other three have become much cheaper, particularly solar which has gone from being the most expensive to the cheapest. In fact, the current operating cost of an existing coal plant is US$41, more expensive than the whole life cycle levelised cost of wind and solar. No wonder the smart money is fleeing fossil fuels.

Talking of which, 56 global banks, insurers, pension funds and asset managers have announced new or expanded coal exit policies in 2020, making 143 in total. Financial institutions fleeing coal is becoming ho-hum, or would be if the rate wasn’t increasing, but what is new is that they are also beginning to exit oil and gas. Over 50 global financial institutions have introduced restrictions on financing oil sands and/or drilling in the Arctic, 23 just this year. One of the largest lenders, the European Investment Bank, has announced that it will be out of all oil and gas by the end of 2021. Why wouldn’t you when you see that ExxonMobil has lost 50% of its shareholder value (US$150 billion) since the beginning of 2020? As Tim Buckley says, global capital is not acting this way simply for lofty social or environmental reasons, or as some ministers like to snipe for ‘virtue signalling’, but rather ‘… mainly because it is the economically sensible thing to do. Their fiduciary duty is to manage risk, and there is no bigger risk than the financial risks of climate change.’ It’s not just lenders and investors though, countries are also announcing plans to get out of fossil fuels: China, Japan, South Korea, the Philippines and Thailand all announced new or more stringent plans during October. Buckley was interviewed about this by Fran Kelly on RN Breakfast a couple of weeks ago.

The falling cost and growing attractiveness of renewable energy is well demonstrated by the graph below which demonstrates the four-fold increase in production of solar and wind energy in Millions of Tonnes of Oil Equivalent (Mtoe) between 2005 and 2018. 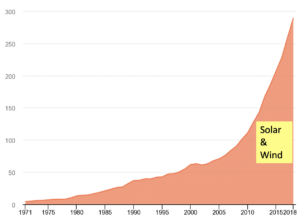 But I wouldn’t want you to get carried away by this escalating increase in the roll out of renewable energy. The source for the graph above is the graph below which is interactive on the website and allows you to display any combination of the fuel sources. As you can see from the data I have added to the right (from the same source), in 2018 wind and solar still provided only 2% of total global energy, while coal, oil and gas provided 82%. There’s a long way to go before the world is 100% renewable. 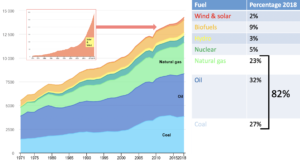 ‘Tragically, in the past 50 years we’ve lost half of our natural land, destroying two-thirds of all living creatures on earth. We must reverse the damage and we can by creating the Global Safety Net, a network of land areas that are vital for nature and humanity.’ So begins a 3-minute video that briefly explains a plan to tackle the twin crises of climate change and biodiversity loss by protecting half of the world’s total land area. But not just any 50%. The plan identifies six distinct types of land (over a third of which is controlled by Indigenous populations) that need protection:

The Net’s vision is for a system where nature and humanity can co-exist and thrive together.

A different plan with much the same idea was recently published in Nature. This plan proposes to return a carefully chosen 30% of the world’s farmlands to nature to dramatically increase the absorption of atmospheric CO2 by vegetation and prevent over 70% of predicted animal and plant extinctions on land. Areas that were wetlands and forests are top of the list for restoration because of their biodiversity and potential to soak up CO2 but arid areas and grasslands are also valuable and cost less to buy. Remarkably, full ecosystem functioning can return to tropical forests in 70 years; it can be even quicker in grasslands and shrublands. All this while preserving food supplies by intensifying food production in remaining farmland in sustainable ways, and consuming less meat and dairy. Where will the money come from? We can start by redirecting the trillions of dollars paid out each year in subsidies to fossil fuels and unsustainable farming practices.

Gray wolves, common across the whole of North America before the arrival of Europeans, were hunted almost to extinction in the USA by the mid-20th century. After 45 years of protection they are no longer considered in danger. So, should they be taken off the national Protected Species List and let states and native American tribes be responsible for their control? Will hunters and ranchers run riot again? Wolf numbers may be looking better than they were but genetic diversity (very important for species survival in changing conditions) is low and they are nowhere near as widespread as they were. And it isn’t just the wolves themselves that need to be considered. As a top predator they have a big influence on the numbers and range of grazing animals and hence of vegetation type. If we found a small band of Tasmanian Tigers and let their numbers build up, would we allow them to be hunted again? (Rhetorical question!) 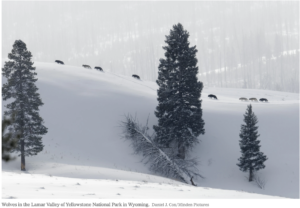