Sunday environmental round up, 9 August 2020

Renewables may be cheaper and growing faster than fossils but it’s emissions that matter and countries’ Paris agreement ambitions are a long way short of salvation. Maybe Doughnut Economics holds the key to a happier, more sustainable society and maybe mangroves can save Africa’s eastern coastline. A talented 13 year-old sings for the truth.

People ask me why I am so pessimistic about the likelihood of the world getting on top of climate change in time to prevent an environmental and human catastrophe.  Look at all the encouraging developments, they say: renewables and batteries getting cheaper and cheaper and their installation increasing rapidly; more and more countries reducing their reliance on fossil fuels, especially coal, and reducing their greenhouse gas emissions; increasing numbers of financial institutions and investors getting their money out of dying fossil fuel industries; big corporations committing to reducing their emissions; electric vehicles getting set to replace the internal combustion engine; a majority of the public supporting real action on climate change; a ‘climate emergency’ being declared by increasing numbers of jurisdictions and organisations; etc. etc. Well, it’s data like the ones in the figure below that maintain my pessimism. 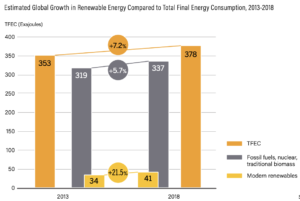 It is completely irrelevant how passionately people profess their commitment to the cause, how many grand statements of ambition are made and how many gigawatts of renewable energy are installed as long as we keep pumping greenhouse gases into the atmosphere. The only measure of our success in averting a climate catastrophe is how quickly and how much we reduce our emissions. And what does the figure above show? It shows that between 2013 and 2018: (1) the total energy consumed globally (TFEC) increased by 7% – fair enough, lots of people in developing countries need better access to affordable energy; (2) the energy produced from renewable sources increased by 21% – sounds good until you realise that this represents only 7 of the total 25 exajoule increase in TFEC, and that renewables still provide only 11% of the total; (3) the other 18 exajoules of increase were produced from fossil fuels, nuclear and traditional biomass (burning vegetation or dung to produce heat, mainly in developing countries). Nuclear supplies approximately 5% of total energy and increased over this period by less than 10%.

I don’t dispute that the transition is happening but it isn’t currently happening anywhere near fast enough to avoid a catastrophe for human civilisation. The simple fact is that between 2013 and 2018 the burning of fuels that produce greenhouse gases increased. So, we shouldn’t be surprised that emissions and temperatures kept rising; fires, floods, storms and droughts increased; and future threats grew. Indeed, the future looks bleaker to me now than it did in 2013. I see nothing to be optimistic about there.

The 2015 Paris climate agreement was criticised at the time for being ‘too little, too slow and too late’ but, credit where it’s due, it was a tremendous diplomatic success and it had the potential to be the springboard for real climate action. Unfortunately, little has happened in the almost five years since Paris to provide confidence that the world’s nations are collectively serious about ramping up either their ambitions or their actions in line with the magnitude of the challenge. A study by Climate Action Tracker shows that neither the world’s currently declared Nationally Determined Contributions (NDCs – the nation-specific greenhouse gas reduction targets each nation has promised to meet by 2030) nor any incremental increases in the NDCs will keep the global mean temperature increase under 1.5oC in 2100. The current NDCs would, if delivered (and collectively the nations are not on track to deliver them), produce 2.8oC of warming in 2100. A 10% increase in the NDC ambitions for 2030 would produce 2.4oC of warming in 2100, and a 33% increase would produce 1.8oC of warming. Only a transformational increase in the 2030 ambitions of every nation (big and small emitters), in particular to reduce emissions by 50% on current levels by 2030, will keep warming below 1.5oC and avoid the worst human, environmental and economic impacts of climate change. You can see the actual and projected changes to greenhouse gas emissions and temperature increases from 1950-2100 in this somewhat complex but nonetheless illuminating figure.

Despite its quirky name, Kate Raworth’s Doughnut Economics is a serious concept that adds the social foundations of a decent life (e.g. adequate income, food and housing; equity; peace) to the concept of the planetary environmental boundaries that we exceed at our peril. For humanity to ‘live within the doughnut’ we must meet the needs of all people (avoid shortfalls in the social foundations) while living within the limited resources of the planet (avoid overshoots). Working with city partners, Raworth has now turned her planetary level idea into a practical tool to help cities answer the question: How can our city be a home to thriving people, in a thriving place, whilst respecting the wellbeing of all people, and the health of the whole planet? By examining the social and ecological domains of life at the local and global levels, ‘Creating City Portraits’ poses and helps cities answer four essential questions: what would it mean for the people of the city to thrive? for the city to thrive within its natural habitat? for the city to respect the wellbeing of people worldwide? for the city to respect the health of the whole planet? Let’s hope Australia’s city planners use answers to these questions as they develop our cities’ post-COVID social and economic recoveries. (The twelve minute video in the link introduces planetary boundaries, Doughnut Economics and the city guide.)

Spurred on by the intense interest shown in the shout out given to mangrove regeneration in last week’s round up (thank you reader), I’m wading in again. Increasing population, coastal development and poor governance have led to the loss or degradation of almost 70% of mangrove ecosystems along the eastern coast of Africa and the nearby islands of the Indian Ocean. Climate change and rising sea levels can now be added to the threats – and another 1% is being lost every year. A new UN Environment Programme report highlights the benefits provided by mangroves (protection from storm surges and coastal erosion, ecotourism, fish nurseries, jobs) and provides guidelines for the essential task of conserving and restoring mangroves. Prime among these are: understand the local causes of degradation and loss; restoration sites should be accessible, devoid of strong waves, and limited to areas where mangroves have been degraded or lost; build on natural recovery opportunities before initiating new planting; rehabilitation programs need to be long term and well monitored; and, crucially, develop income-generating activities for local communities who must be engaged and empowered. Done well, every $1 invested can deliver $3 of benefits.