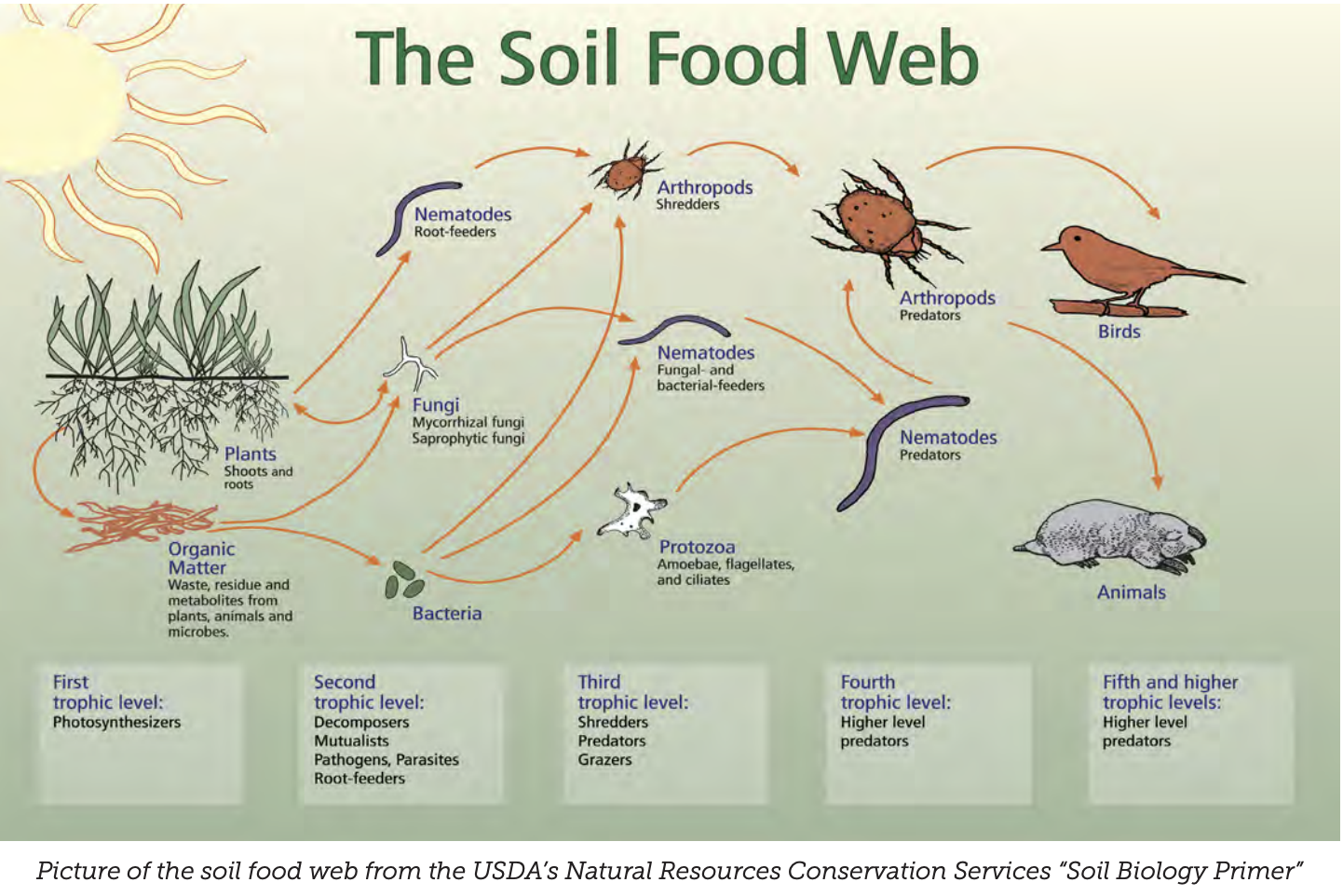 Chemical pollution is an under-appreciated threat to our oceans. China and the OECD are now running neck-and-neck on greenhouse gas emissions but Australia’s major overseas coal and gas customers place their bets elsewhere as ‘Net Zero’ starts to make a strong run in the 2050 Survival Stakes. 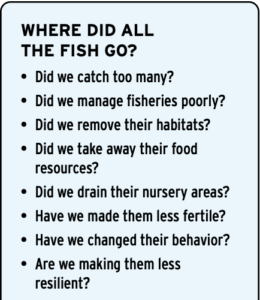 The answer, of course, is all of the above, plus marine heat waves killing coral reefs and kelp forests; warmer seas forcing some species to move pole-wards; ocean acidification damaging the growth of shellfish and corals; plastic pollution choking animals’ respiratory tracts and filling their bellies; de-oxygenated ‘dead zones’ causing algal blooms; etc. etc. Chemical pollution of our oceans and fisheries is, however, often forgotten. 80% of marine pollution originates on land but aquaculture also plays its part. Specific pollutants include industrial and mining chemicals, pesticides, fertilizers, pharmaceuticals and heavy metals, all of which have harmful effects on ecosystems and all trophic levels from plankton (which generate two-thirds of Earth’s oxygen) to whales, and affecting insects, birds and mammals, including humans, along the way. The situation is critical for ecosystems and for commercial fish stocks but there is still time to clean up our oceans and prevent an ecological and food security disaster. A global approach is needed including strictly controlling industrial chemical pollution, limiting new plastic production and finding alternative products, reducing reliance on pesticides and fertilizers, and encouraging regenerative agriculture and aquaculture. Mass fish kills garner the headlines but it’s the insidious, invisible, chemical killers that pose the greater threat.

The chemical pollution report has a detailed description of the terrible damage that has been done to Gladstone Harbour within the Great Barrier Reef Heritage Area. This started 70 years ago with contaminated water and sediment from coastal aluminium, coal, cement and cyanide industries, and reached its zenith between 2010-2013 with the crazy removal of 23 million cubic metres of seabed (equivalent to a pile of dirt a kilometre-high over the MCG) to create a deep water harbour for exporting liquid natural gas.

The Rhodium Group has produced a very snappy summary of total net greenhouse gas emissions in 2019. This represents the combined warming potential of CO2 and five other greenhouse gases minus the CO2 absorbed by forests, mangroves, etc., expressed as gigatons of CO2-equivalent (CO2-e). Briefly, and rounding for readability, in 2019: 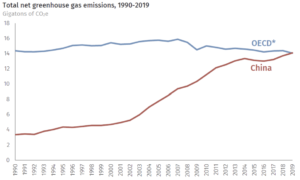 Tim Buckley has documented the massive changes in fossil fuel policies that are occurring in China, Japan and South Korea, Australia’s three largest export destinations for thermal and coking (steel making) coal and liquified natural gas. In a nutshell:

Over 50 countries, producing more than 50% of global emissions, have already set a net zero emissions target and it’s likely more will follow suit before or at the Glasgow COP26 meeting in November. The World Resources Institute (WRI) has answered eight questions about net zero including: What does it mean? By when? What needs to happen? Is the world on track? (No!) Are net zero targets just greenwashing at the national level? (Not necessarily but that’s a big danger.) The top graphic below displays the timelines needed to reach net zero for CO2 alone and for all greenhouse gases while having a reasonable chance (but no guarantee) of keeping warming under 1.5oC and 2oC. To stay under 1.5, the world needs to reach net zero emissions for CO2 by 2050 and for all greenhouse gases by 2065. We’ve got about 30 years more to stay under the much more dangerous 2oC. The lower graphic presents the WRI’s ten suggested solutions for reducing greenhouse gas emissions. 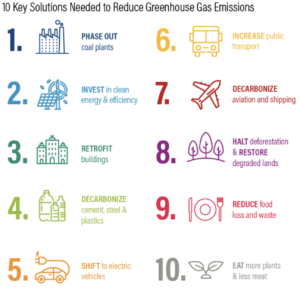 The International Energy Agency (IEA) report that I mentioned on May 30th puts a little flesh onto some of the WRI’s recommendations. The first graphic below provides examples of the changes that will be required between now and 2030 to get us on the net zero pathway, remembering that world population and GDP will continue to increase. Wind and solar capacity combined will need to increase four-fold and electric vehicle sales eighteen-fold, while energy usage per unit of GDP will need to decrease by approximately one-third. 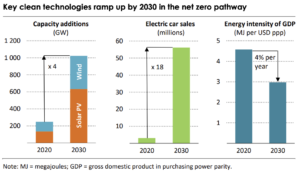 The next graphic displays changes to, what the IEA calls, ‘energy security indicators’ between now and 2050 on the net zero pathway. Oil supply will plummet from 90 million barrels per day to 25 million (but the OPEC countries’ share will increase), the demand for minerals critical to the energy transition will increase more than six-fold, and solar PV and wind’s share of electricity generation will increase from less than 10% to almost 70% 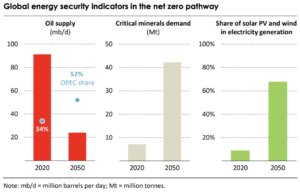 The good news for people’s lives from all this is that by 2030 there will be a net increase of 25 million jobs and two million fewer premature deaths from air pollution, and that the benefits will be experienced in developing as well as developed countries. There are large roles for governments and citizens in all this but, get this Scotty, if you want citizen support for the introduction of challenging changes ‘decisions must be transparent, just and cost-effective.’ Three words you don’t normally associate with governments in Australia.

If you’re not quite sure what a trophic level is (mentioned in the article above about marine pollution), perhaps the diagram below that illustrates trophic levels in the soil’s food chain will help. 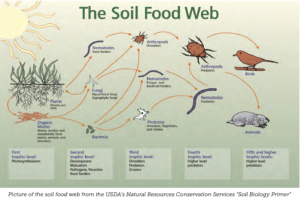