Threats to human existence – not what you might expect. The lightly tapped potential of energy efficiency (turning off your computer camera helps) and the heavily exploited pangolins. Cormann’s Pauline conversion to climate action on the plane to Paris undermined by sceptics.

‘Should we value human lives in the distant future as much as present ones?’ is the subtitle of a review by Jim Holt of Toby Ord’s about-to-be published ‘The Precipice: Existential Risk and the Future of Humanity’. Ord considers the evidence about various routes to human extinction and calculates the likelihood of humanity being completely wiped out in the next century. Holt’s review itself focuses on the moral and practical challenges in working out how much current generations should be prepared to sacrifice to ensure the very long term survival of the human race while avoiding letting ourselves become ‘moral slaves to that future’.

The long term survival of humanity is of no more than academic interest to me as I do not identify with Holt’s claim that ‘the meaning and value of our own lives depend on their being situated in an ongoing flow of generations’. I don’t believe that we are here for any grand purpose, so I don’t really care if the human race is wiped out in 50, 500 or 5 million years. I do, however, care about the suffering of the people who will have to endure the race’s demise and I am horrified by our own selfish, callous stupidity in inflicting this on them. This is what motivates my environmental activism, and the arrogance of taking lots of other species down with us.

What does interest me are Ord’s estimates of the chance of humanity being extinguished in the next hundred years. Overall he puts it at 1 in 6 (‘The Precipice’). The risk of a natural event (such as a meteorite or a super-volcanic eruption) being the cause is put at a remote 1 in 10,000. The larger threats are anthropogenic but the major contributors to this risk may surprise you:

Regarding climate change, Ord thinks that on our present course climate change will wreak global havoc for generations and drive many non-human species to extinction but is unlikely to wipe out humanity entirely. Unless that is, amplifying feedback loops create a runaway greenhouse effect that boils off all the oceans to create a Venus-like Earth.

Despite the all-but universal rhetoric that it’s a great and very do-able idea, energy efficiency is the extremely low profile vehicle on the journey to keep global warming under 1.5oC. Global energy efficiency gains were around 1.5% per year until 2020 when the gain fell to under 1% as a result of low fossil fuel prices and COVID – 3% per year is about what’s needed. Apart from being a necessity for reaching zero emissions to combat climate change, the direct advantages of a more efficient and renewables-driven energy system are legion: for instance, fewer toxic pollutants released; reduced raw materials and fresh water consumption; cost savings for households and alleviation of the energy poverty currently experienced by over one billion people; local employment creation; and prevention of the human rights abuses often associated with resource extraction. Priority areas for energy efficiency improvements are buildings, consumer products and industrial processes. While some jurisdictions now have codes and performance standards, certification processes and demonstration projects in these domains (see the linked article), achievement of the 3% per year improvement will require governments to triple their investments in energy efficiency.

NSW has increased its 2030 energy efficiency target to 13% this week. In announcing the increase, Minister Kean claimed that this will deliver $2.4 billion in reduced energy costs for households and businesses, inject an additional $1 billion dollars into the NSW economy and support 1,600 additional jobs. Kean’s claims confirm some of the predicted benefits mentioned above but the efficiency improvement is still a modest 1.5% per year, only half what is needed.

Mohamed Adow is founder and director of Power Shift Africa, a think tank promoting climate action and zero carbon emissions in Africa. Nicole Rycroft is founder and executive director of Canopy which works with leading fashion, publishing and consumer brands to pressure fibre producers to stop sourcing from old-growth and high carbon forests. Mohamed and Nicole recently received Climate Breakthrough Awards and will be the beneficiaries of US$3 million  and support over the next three years to help them develop their strategies. Well done to them. 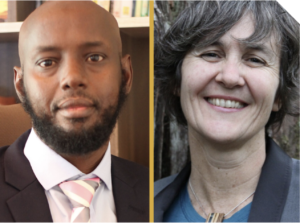 I keep returning to the plight of pangolins, the only scaly mammal and the most trafficked mammal in the world, because their persecution is so terrible and pointless. I’m conscious that these comments could be interpreted as a privileged, old, white, male of European descent displaying gross cultural insensitivity. And I might agree with those sentiments if the problem of pangolinocide was restricted to geographically-specific, traditional cultural practices. But it’s not – the trade in pangolins is now primarily related to global capitalism and crime. This three minute video of the problem is not for the squeamish.

The seven month selection process for the next Secretary General of the OECD is due to be completed this month, with the successful candidate commencing duties on 1 June 2021. There are two candidates left: Cecilia Malmstrom from Sweden and our own Mathias Cormann. A group of CEOs of Australian environmental organisations and international climate activists (including Bill McKibben and Sharan Burrow) has written to the selection committee chairperson expressing their firm belief that ‘the public record of Mathias Cormann should preclude him from being selected’ and their ‘grave concerns about Mr Cormann’s ability to truly ensure the OECD is a leader in tackling global climate change’. However, in a less than encouraging sign whatever the outcome, in their brief bios on the OECD web page neither candidate mentions the environment or climate change. This may reflect personal blind spots or a shared ability to read what the OECD is not looking for.

Messy bedroom. Bad hair day. Eating spaghetti. All good reasons to turn your camera off during Zoom meetings. Saving the planet is another one. Data processing requires a lot of electricity and one hour of videoconferencing or streaming can create 150-1,000 grams of CO2 emissions, use 2-12 litres of water and require land area equivalent to half an A4 sheet of paper. Leaving the camera off and reducing the streaming quality reduces these footprints by around 90%. The graph below demonstrates the big differences in the various apps’ environmental footprints. 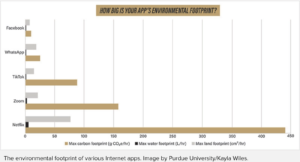