Are the ‘big four’ accounting firms above the law?

In 2004, the federal parliament passed the Age Discrimination Act, making age discrimination in employment, education and the provision of goods and services unlawful. But the major accounting firms seem to think it doesn’t apply to them. 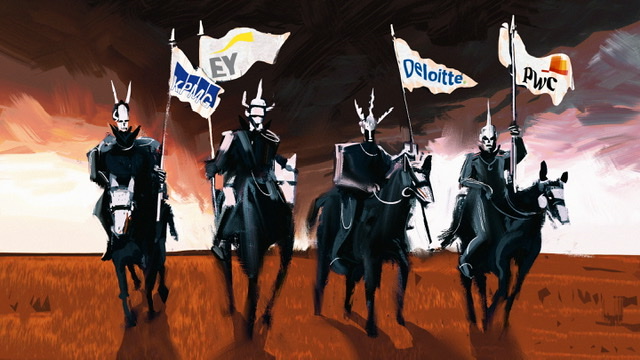 As with the three other commonwealth anti-discrimination laws, against race, sex and disability discrimination, the implementation of the Age Discrimination Act and the handling of complaints in relation to  it have been the responsibility of the Australian Human Rights Commission, with an ultimate recourse to a federal court.

Since 2004, many hundreds of complaints of unlawful age discrimination in the workplace have come to the AHRC. Most have been mediated, often with satisfactory outcomes

Australian employers are in general aware of this law, but even in 2020, partnership rules or policies at the big four consulting firms Deloitte Australia , Ernst and Young, KPMG and PwC seem to have ignored the Act, and continued to remove partners on the basis of age , varying from 55 to 62 across the firms .

Regardless of the view seemingly held in the big consultancies that a partnership arrangement is different in relation to the law from regular employment, this self-exclusion by the big four from the intent of the Act is now facing challenge.

It has been reported that Ernst &Young Oceania has recently removed the retirement age clause from its partnership contract, a welcome decision. But the other big three retain the practice of removing partners once they have reached a certain age. KPMG has recently publicly reaffirmed its position of insisting on partner retirement at the age of 58. How have the big four, (now perhaps three) been able to ignore the central intention of the Age Discrimination Act all this time?

Very few individuals choose to do this. Understandably most expect that such action would damage their chances of other employment, and fear costs. So far there has been no court decision on a workplace age discrimination complaint. In the absence of court decisions, and associated consequences such as fines and costs, it may have appeared to big and wealthy companies that they could ignore the law without penalty.

But currently a Deloitte Australia partner is in court challenging the company decision that his partnership ended when he turned 62.

The court decision in this case will be carefully studied by the big three and all other employers who may have relied on the difficulties for the individual of court action to keep using age discriminatory practices. The federal government should pay close attention also.

The effect on the individual can be catastrophic. The employee who loses employment in their 50s must wait until 66 for eligibility for the age pension. In the meantime, they must spend any savings including super savings, then try to survive on the current version of newstart. Loss of home ownership is a common consequence as well as health and relationship breakdowns. Without a home and unable to afford commercial rent, the jobless person faces homelessness.

This is all bad news for any federal government. Nationally, earnings lost by pushing out older workers while they still have capacity are huge. Government loses income tax revenue, the benefits of contributions to the growing national pool of superannuation savings and faces increased public spending on health, welfare and housing assistance.

For these reasons both Coalition and Labor governments have supported the Age Discrimination Act since 2004, and resourced training and communication efforts to improve employer compliance. While in recent years there has been modest growth in the numbers of older Australians participating in paid work, age discrimination continues to inflict a growing burden on the public purse and assaults the dignity and wellbeing of older workers. This is a big problem. The over 60s comprise the largest and fastest growing age cohort in Australia.

Now that the pandemic has caused massive job losses all over the country, the situation of older workers can only get worse. Most policy effort and public sympathy understandably focus on young workers, those just starting their working life. But individuals in their mid-50s and older need attention too. When supported by government initiatives jobs start to return, age alone must not block capable and experienced workers from getting a fair go.

Most unemployed older people live in another world from partners in the big four consultancies. Even so, protection of the statutory rights of everyone to work without age discrimination must be upheld. The message to the entire workforce must be clear. It is unlawful to sack a person just because of their age.

If Deloitte loses this case in the federal court, this message to all employers, consultants, and job seekers will be so much stronger.

As for the Commonwealth, regardless of the outcome of this case it is worth noting that the Commonwealth is a major procurer of high value services from the big consultancy firms. Isn’t it time that they reviewed the current practice of granting government tenders to companies whose official policies appear the defy commonwealth law?

This entry was posted in Human Rights, Politics, Top 5. Bookmark the permalink.