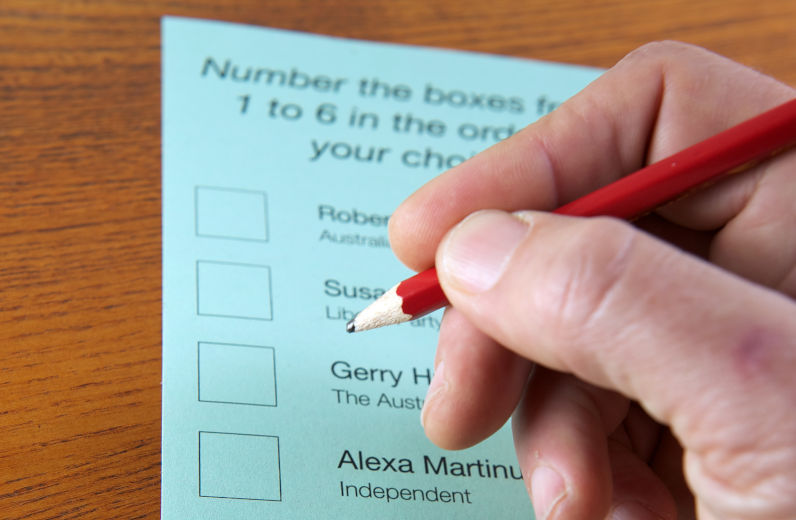 Without pressure from Independents, many election concerns will again be ignored or indefinitely postponed. Image: iStock

If you normally vote for the Greens or you are a traditional ALP supporter in a blue-ribbon Liberal seat such as Goldstein, Wentworth, Kooyong, Mackellar or North Sydney, at this election you face a choice between voting for your preferred party candidate or removing the Morrison Government from power.

The emergence of popular, intelligent and highly articulate female Independents in these electorates poses a real challenge for Liberal incumbents, particularly if Green and ALP supporters opt to vote tactically this time.

In these seats and others, only Independents have any chance of dislodging sitting Liberal members. To do this they need to overcome four difficult electoral challenges:

(2) Get a significant proportion of rusted-on ALP and Greens voters to put 1 next to their names so Independents come second in the primary count: they need a large number of ‘anyone but the Liberals’ to vote tactically rather than ideologically;

(4) They win sufficient first preferences from other candidates on the ballot to get to 50% + 1 after they are distributed, even if most Independents eschew ‘how to vote cards’ and therefore decline to deal on preference swaps.

There are additional political challenges for Independents to overcome, on top of the perennials which include campaign funding and volunteer recruitment.

Without the financial and political backing of a major party, Independents have to raise their personal profiles in their communities to overcome rusted-on support from those who vote for a party regardless of who the local candidate is. The voter has to know the Independent by name in order to cast a ballot for them, whereas the incumbents they are trying to replace can be anonymous party hacks who gets into parliament simply by winning pre-selection for a seat their party always wins.

A significant challenge comes from the corporate media, especially the Murdoch newspaper and TV stable, who make no attempt to conceal their role as PR boosters for the Morrison Government. As the election approaches, they have intensified their attacks on those with the temerity to challenge the political arm of the empire in their sinecures.

Commissars in Australia’s version of Pravda seem to have awoken in a moral panic, hysterically claiming that “extremist” Independents are “exploiting” the preferential voting system, where an actual choice of candidates is now considered “undemocratic” (Greg Sheridan). This is reminiscent of their earlier attacks on compulsory voting, which continues to raise the prospect that government might be taken out of the hands of those “entitled” to power (Peta Credlin).

We have already seen The Australian smear Zoe Daniel as insufficiently pro-Israel in an attempt to dissuade Jews in Goldstein from voting for her. Herald-Sun advertorials for the Treasurer and attempts to dig up dirt on his challenger in Kooyong Monique Ryan, are signs of acute desperation in the Murdoch-LNP camp. Daniel’s opponent in Goldstein, Tim Wilson, was given free space between advertisements in Pravda to claim that competition for his seat was an “assault on democracy” from people he earlier described as exhibiting “Brunswick values”. It promises to get even uglier.

The Australian isn’t really a newspaper. It is a political pamphlet of the kind found during the French Revolution. It conflates news and opinion. Its front page is designed to set an ideological agenda. And it makes no attempt to be even-handed during election campaigns. With declining circulation, it grossly exaggerates its influence on election results. Like its electronic stablemate Sky News, which has a miniscule audience, Australia’s Pravda preaches to the converted, specialising in confirmation bias. Few undecided or swinging voters bother to read it: wisely so.

Independents should not expect much better from Nine newspapers and its TV network, who regard them as little more than campaign curiosities, and would rather deal with the major parties and their deep advertising pockets, who have ultimate control over media laws which protect them from competition.

Even the ABC, cowed by ongoing funding cuts and future threats, tends to view the ”teal challenge” through the prism of its likely effect on incumbents rather than any serious examination of their policies. The two-party mindset is difficult for young, inexperienced journalists looking for ‘gotcha’ headlines to resist.

Incumbents in these now marginal seats are not close supporters of Scott Morrison, nor in some cases do they privately support their own party’s policies on climate change and an anti-corruption commission. Their posters and corflutes often dispense with the Liberal party logo altogether, or put it in unreadably small font. Their heart clearly isn’t in the policies they have to sell and they despise their coalition colleagues in the National Party. They are more likely to describe themselves as “progressive” or “moderate” liberals to distance themselves in the public’s mind from the party which has endorsed them.

Of course ‘they’ use these terms, however inaccurately. In 2019 Tim Wilson swore his oath of affirmation on Milton Friedman’s Capitalism and Freedom before taking up his seat in Parliament. The current member for Goldstein is a free-market IPA ideologue, except when it came to his preference for taxpayer-funded employment and support for corporate welfare during the COVID pandemic. He is certainly no moderate.

The LNP shift to the right has made the political lives of these Liberals increasingly tenuous. Should they fall to their challengers on 21 May, the next generation of small l Liberal Party leaders will be almost wiped out, vacating the field to paleo-conservatives who will dispense with everything liberal except the brand name. Incredibly, the fear of this happening is now invoked as an argument by party cheerleaders in the media to vote for Josh Frydenberg, Tim Wilson, Dave Sharma, Trent Zimmerman and Jason Falinski. The message is: “kick us out and even worse will follow!”

As the ideological convergence of the major parties continues, rendering political choices all but an illusion, Independents and minor parties who hold the balance of power in both houses of the Parliament may be the only way the nation can get the urgent policy changes it desperately needs.

Consequently, when major party incumbents run scare campaigns about the “chaos” and “instability” that will ensue if Independents win seats from them, they are referring to the threat Independents pose to the self-satisfied, do-nothing political culture and grift which currently reigns in Canberra, one which rewards backbenchers with the prize of a lucrative parliamentary pension for life. If they rise to the ministry, an additional taxpayer gift comes in the form of network contacts assembled while they are on the public payroll, which they can exploit as consultants for private gain after their parliamentary career ends.

The tweedledee-tweedledum small target strategy is now bipartisan and de rigour for Oppositions lazily waiting for the political cycle to turn. Aided and abetted by ridiculously brief electoral terms, voters are offered short term bribes tested on focus groups instead of long-term policies and structural reforms which may not bear fruit for decades or more. Planning ahead has all but vapourised as an approach to policy-making.

Consequently, there are many important, but neglected policy areas which need urgent action rather than empty, unfulfilled promises. Though by no means a definitive list, these include:

– climate change and conservation of the environment

– a faster transition to renewable energy

– greater respect for women in the community, with a focus on ending domestic violence

– greater financial accountability and an independent commission against corruption

– a humane approach to asylum seekers

– restoration of funding to the higher education sector

Without pressure from Independents, many of these concerns will again be ignored or indefinitely postponed by reflexive timidity and short-term thinking within the major parties. The lowest common denominator effect will continue to trump bold and creative initiatives.

Far from being hung by the proliferation of Independents, both houses of parliament might begin to function again in a productive way if voters are no longer robbed of meaningful political choices.

However, this is unlikely to happen unless Australians embrace tactical voting in greater numbers than at any previous election. With such impressive candidates at this ballot, the Independents challenging sitting Liberal members will gather significant support in their own right.

But to win their seats, they will also need to persuade enough traditional ALP and Greens voters that consequences are more important than misplaced loyalties and feel-good intentions, and to switch their votes from their preferred choice to one that is more likely to avoid their least desirable outcome: the return of the Morrison LNP Government.