Does Morrison need Porter more than the votes of 50% of the population? 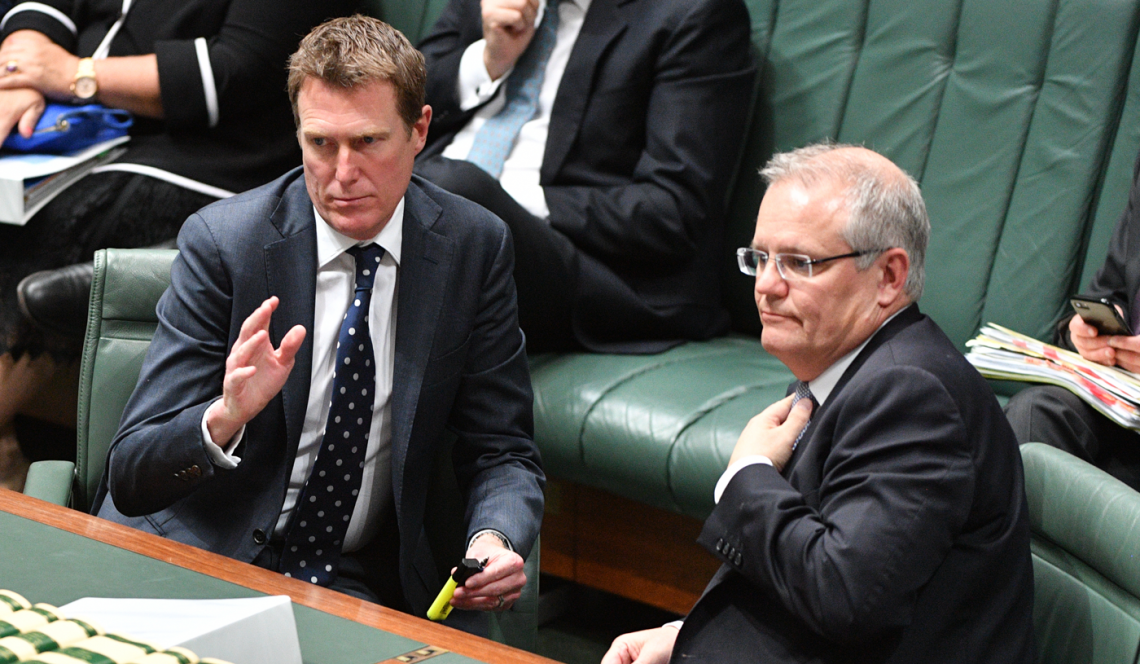 An inquest is not usually well placed to settle matters in contest. In the case of an alleged suicide, for example, the Coroner’s remit is to find the cause of death, not to conduct a wide-ranging inquiry. One the other hand, in cases before professional tribunals, lawyers, doctors, nurses and others have been struck off after the consideration of allegations going to their character and fitness. This is for the protection of the public.

Those who want to contemplate what the complete breakdown of the rule of law in Australia could look like should re-contemplate one of the scenes of the riots in Washington as supporters of Donald Trump gathered to try prevent the two houses of America’s parliament confirming the election of Joe Biden as President. Outside, the congress was erected as a gallows, at which, perhaps symbolically, Trump’s vice-president, Michael Pence, was to be hanged if he participated in certifying the election.

The gallows and the noose, sometimes the tree and the noose, have long been symbols of the lynch mob or vigilante mentality that is deeply embedded in American history, particularly when white folk have become angry about allegedly unpunished crimes, such as horse or cattle stealing, or a perceived want of respect, particularly for white women, from blacks, Jews and, at one stage, Catholics. It has also been used, frequently, to deal with people trying to unionise workforces.

State and federal authorities have a long and ignoble tradition of cowering before white mobs, and of failing to punish vigilantism or lynch law. Likewise, American hotheads on the far right of politics are greatly given to talking of exasperated American patriots who are not going to take it any more, seizing power and disposing of those they think have been abusing it. The American Bill of Rights is said to protect such speech.

It was perhaps in deference to that tradition (or perhaps his respect for the role of police in fostering it) that Prime Minister Scott Morrison hesitated about condemning the mob violence of January 6. Or the words and (lack of) deeds of President Trump in inciting a violent takeover of the legislature, and the extension of his presidency on the grounds that he had really won the election except for the fact that the other side had more votes in the electoral college and had probably, if not provably, cheated.

Given what happened, and the continuing truculence of Trump and many of his followers, it would be difficult to insist that respect for the rule of law, or for the processes and institutions of American government, have been restored. However, most of those institutions, and the rule of law itself, seem to have survived the attack upon it.

Morrison is talking self-serving nonsense in claiming that the fundamentals of the rule of law in Australia would collapse if action were taken to investigate allegations of sexual assault by the Attorney-General, Christian Porter, even though the alleged victim is now dead. So is Porter, who is using the claim for refusing to resign. Criminal prosecution of Porter is now impossible, given that, investigating police had not, in spite of five interviews with the alleged victim, bothered to get a sworn statement. Indeed it is said that the victim, shortly before she was found dead, asked police by email to drop the matter, given her mental health situation.

Scott Morrison has suggested that the police having spoken, any investigation into Porter’s behaviour would involve succumbing to “mob rule”, or being voted off the island.

“And we have to be very careful even in traumatic and sensitive issues like this that we do not fundamentally undermine that principle. Because upon that, our entire system is built.”

Morrison, Porter, and/or the Morrison government have, over the years, violated every single one of these fundamental principles. Regardless of their complete hypocrisy, we should respect (in a way they often do not) the principles of fair and public trials, based on evidence able to be seen and cross-examined on both sides, guided by the rules of evidence (including exceptions provided for) and on a fundamental presumption of innocence. If Christian Porter is to be tried for any crime it should be by the same rules that prevail for everyone else (including Bernard Collaery).

In theory, had the NSW Police been more diligent, and less distracted by the grandstanding of Mick Fuller as he accumulated more and more power last year, they might have gathered enough evidence to found a prima facie case, and a charge, even after the woman’s death. But it’s too late to repair the deficiencies now.

It is not too late to find out what happened by other means, and that can occur without putting Porter at any sort of criminal “double jeopardy” or denying him the presumption of innocence.

It is open to the government to hold an inquiry – even a royal commission. Or a parliamentary inquiry. I don’t see why it should be confined to questions of sexual assault. Whether, for example, Porter is a fit and proper person to be the first law officer of the nation, does not depend on whether he has been charged, or convicted, of a sexual assault offence. It is not foreclosed, as some sort of autrefois acquit, by an incapacity to launch a criminal prosecution.

Porter can’t be charged. But the rule of law does not prevent an inquiry

Does anyone imagine that Morrison can long hold out that Porter is without a single stain on his character, the ideal person to take his place in a campaign to enhance the dignity, safety and rights of women, including particularly people working in ministerial officers? It would be interesting to see Morrison try.

One sees regularly cases before professional tribunals in which lawyers, doctors, nurses, physiotherapists and others have been struck off after consideration of allegations going to their character and fitness. In some such cases, the person has had their re-registration challenged even after being acquitted of alleged crimes. Striking off is not regarded as punishment, but protection of the public.

Likewise with footballers (including those accused of sexual improprieties), racing clubs, even sporting clubs. Nor do allegations have to be framed in the form of some criminal offence. Court challenges generally go to issues of whether the “rule of law” was followed: which is to say whether natural justice was accorded, whether the party was given a fair chance to answer allegations, including, usually but not invariably, a chance to face accusers and to cross-examine them.

Last month, after extensive hearings, former Justice Paddy Bergin held that Crown Casino, as represented by its owners, board and managers, was not a fit and proper person to have a casino licence in NSW. Bergin cited evidence of slackness in enforcing strict rules – even laws – about money-laundering, association of the casino with organised crime figures and so on. But she did not “convict” Crown of such crimes. She simply found, to her satisfaction (and on the balance of probabilities) that such things were occurring and that Crown had not been doing enough to counter them.

Over the years, any number of commissions against corruption, royal commissions or commissions of inquiry have examined the behaviour of officials or citizens accused over conduct, which if found to have occurred, would amount to a crime. But such inquiries are not alternative courts, and they do not hand out sentences if they establish that a crime occurred. Rather, they make broader findings for government and the community about patterns of crime or misbehaviour, and whether these amount to official corruption. If they see evidence of specific crimes, they may pass these on to police, or directors of public prosecutions, for follow up.

A Coroner’s inquest is not usually well placed to settle matters in contest, even if it has processes for bringing evidence to light. In the case of an alleged suicide, for example, the Coroner’s remit is to find the cause of death, not to conduct a wide-ranging inquiry into anything, or everything, thought to have been in the mind of the victim at the time of the actions which brought about the death.

It is rare for Coroners to investigate the truth or reasonableness, or even the facts about, the grievance or matter agitating the mind of the person committing suicide, or to allow material – such as suicide notes – to point a finger, as it were, from the grave. In my experience, coroners are often given to dispensing with inquests altogether once police inquiries satisfy them that suicide was involved.

Women, already talking of gathering soon at parliament to protest against the appalling treatment of victims of sexual assault, are unlikely to be looking for a tree branch from which to suspend Porter. But their eyes will be on Morrison. Morrison should ask his wife and daughters whether he really needs Porter more than the votes of more than half of the population.