And in true Orwellian Doublespeak, Prime Minister Scott Morrison used the war footing to paint himself as the champion of peace.

It’s been a while since the government actually announced a policy and that drought looks set to continue. Because even though there was blanket media coverage of the fact that the federal government is planning a big budget spend, the government once again delivered that announcement via “a cosy briefing to a tight crew of chosen Canberra-based journalists“.

And the cosy crew dutifully did their bit, with near-identical articles posted almost simultaneously late on Wednesday night, each regurgitating Josh Frydenberg’s draft speech, with reports of what the Treasurer “will say” littered throughout their publications.

The only difference this time from previous drops was that the circle has expanded beyond The Australian, The Australian Financial Review, The Age/SMH, The Conversation, ABC and The Guardian.

Rupert Murdoch’s tabloids are now also getting looped in, with The Adelaide Advertiser, The Daily Telegraph, The Herald Sun and The Courier Mail all getting the drops, all running segments of the Treasurer’s upcoming speech, and all publishing at 10.30pm on Wednesday night. 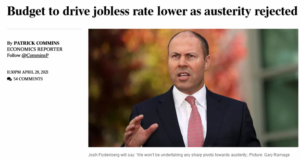 Nonetheless, it was a welcome change from the blaring “drums of war” reports that had filled newspapers in the preceding days. That coverage came after Home Affairs secretary Michael Pezzullo claimed that we need to “get ready to fight for our liberty” and that the “drums of war” were beating.

This unleashed a barrage of alarmist coverage.

As to whether it was appropriate for an unelected public servant to make incendiary comments about going to war with a global superpower, Scott Morrison said “it was not for him to commentate on the Home Affairs secretary’s comments”.

Voice of reason; champion of peace

But the alarmist coverage gave the Prime Minister some great fodder to paint himself as the voice of calm and stability, the champion of peace.