Tamed estate: Debt and deficit disaster? Not when it comes to the Coalition

The coverage was positively glowing. Debt projected to be four times higher than at any point under Labor but nothing could silence the cheerleaders.

The Federal budget was the only news on anyone’s lips. Government debt is projected to blow out beyond $1 trillion, more than four times higher than at any point under Labor.

And yet, let’s just compare some coverage.

Some of the superlatives used to describe the Budget were: “Ute Beauty”; “Election Injection”; “Rebuild of Dreams”; “Super Spender”; “$1.6bn for the heartland”. 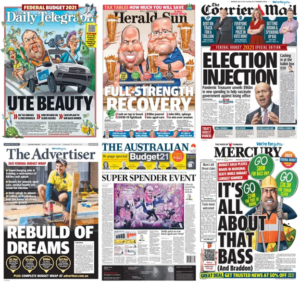 The rank hypocrisy didn’t trouble many, with columnists at The Australian cheerleading the budget.

Simon Benson reckoned there was “No one left behind”.

Maybe he meant “No business left behind”, as tax incentives were extended, to a value of $20.7 billion. There were many left behind:

There was plenty of other fun floating around in budget week.

There seemed to be cause for celebration that “stage 3 tax cuts [will be] cheaper”.

The tax cuts will be a lower cost to the budget because of the slowest wage growth in decades.

The tax cuts, which will be going to the highest-earning Australians, will still cost us all a whopping $17 billion instead of the projected $19 billion in the first year they take effect.

Steve Price at The Herald Sun worked himself into a lather that Daniel Andrews was still recovering from a broken spine.

Finally, we can hark back to the good old days (last week) when there was still some outrage over Australian citizens being banned from returning to their own country.

The Australian Financial Review, in defending the government against “charges of racism”, pointed out that borders were closed with other countries.

Missing from the analysis was that Australian citizens were still allowed home when those borders closed, via repatriation flights and off-shore quarantine.