The biggest story in town? That all depends – it might be the Brereton Report on the killing of Afghan children by Australian soldiers. Then again, it might be a China tweet.

Nine newspapers left readers in no doubt of the seriousness of what happened.

However, The Australian seemed more concerned with the wrongful punishment of soldiers who had done nothing wrong: with the decision, since backtracked on, by head of the Australian Defence Force, Angus Campbell, to strip from all the special forces personnel in Afghanistan of the meritorious citations.

Yet to be published in the mainstream media are the snippets that should make the blood of even the most patriotic Australian run cold.

“What is described in this Chapter is possibly the most disgraceful episode in Australia’s military history, and the commanders at troop, squadron and task group level bear moral command responsibility for what happened under their command, regardless of personal fault.”

As Australian wine joined barley and coal as sacrificial lambs on the altar of incompetent diplomacy, the mainstream media offered a rousing chorus of pro-ScoMo jingoism, and anti-China and anti-Labor sentiment. It was the perfect opportunity to deflect from the PM’s abject failure on foreign policy: another means through which to further cultivate his carefully curated image.

The fact that of all the staff he could have isolating with him, Morrison chose to have his personal photographer in quarantine on his return from Japan seemed to be lost on The Australian. As does the reflection from the AAP:

In spite of this – and, indeed, in spite of the fact that there are currently no direct communications between Canberra and Beijing to resolve the growing list of trade disputes – we were treated to succulent sycophancy from Graham Richardson and Dennis Shanahan, even as our largest trading partner continued its shut down of exports in our biggest economic downturn in recent memory.

Dennis Shanahan in The Australian

From Simon Benson at The Australian

The rest of the mainstream media were quick to rush to the defence of the Prime Minister, pointing the finger squarely at Beijing…

… and, bizarrely, pointing the finger at the opposition leader Anthony Albanese.

and in The Australian again:

Besides apportioning blame to seemingly every possible scapegoat besides our actual government, the clear message from the media was that the world is on our side.

Again from Simon Benson at The Australian:

Wow. The international community really seems to be getting behind Australia. Simon Benson assures us that few world leaders believe Scott Morrison to be at fault. A shame none is mentioned. Latika Bourke says “Countries across the world are showing significant support for Australia”.

As this article went to press, the only countries to have made a peep are our oldest allies – New Zealand, the United States and the United Kingdom. The US and the UK have ongoing disputes with China. One has been embroiled in a trade war under Donald Trump, and the other recently banned Huawei from being involved in the roll-out of 5G.

While the “significant support” involves 200 representatives from around the world – not one speaks with the backing of their government or with any real authority. Empty statements of support are not replacement for competent foreign policy.

As for the international media?

A straight bat from The Wall Street Journal 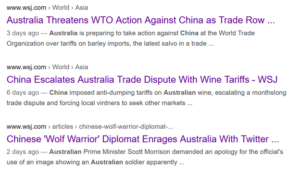 In reality, how much substance was there to these comments from the journalists? “Few world leaders agree”; “Countries across the world”; “The diplomatic scales have tipped heavily in Australia’s favour”; and “Beijing’s position has been demonstrably weakened”. Opinions or, more accurately, hopes presented as fact. Surely that’s propaganda. 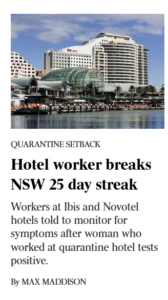 Has to be in Sydney. If it were in Victoria, surely the headline would be screaming ‘Dan’s to blame!’