What a week. Where to begin. Let’s start with the big stories. Scott Morrison took a barre class. Amazing. What a lithe, active, down-to-earth Prime Minister we have. 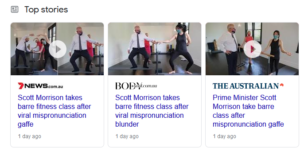 Morrison also found time for a beer – and conveniently a film crew was there. This breaking story also naturally garnered airtime on 3AW, not just column inches. 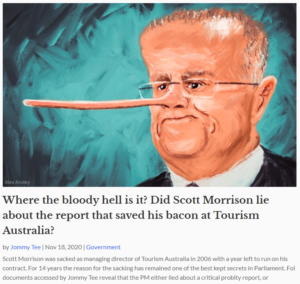 Meanwhile, no doubt
we will wait … and wait
… and wait … to see
what mainstream media
outlet follows up, with
even a single question,
Jommy Tee’s article
regarding Scott Morrison’s
unceremonious sacking
as managing director
at Tourism Australia
back in 2006.

Luckily we have an extremely diverse media to report the actual news. Ahem.

In fact, we are near the top of the list (third) for the most concentrated newspaper ownership, behind those liberal utopias of Egypt and China, as the Guardian reported. 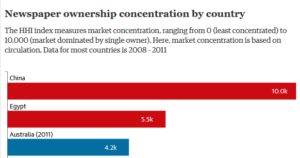 We can add this lack of media diversity to the list of glorious categories in which we’re also either world leaders or close to: CO2 emissions per capita; exports of coal and gas; failure to commit to net-zero emissions; and land area burned by bushfires in a single season, just for starters.

There might be some connection among all these, but you’d never guess based on the media coverage.

That didn’t stop the crusade against a royal commission into media diversity.

The Sydney Morning Herald published an article by Tom Switzer from the neo-liberal thinktank Centre for Independent Studies putting Malcolm Turnbull and Kevin Rudd in the category of “attention-seeking narcissists”, channelling “George Orwell”. 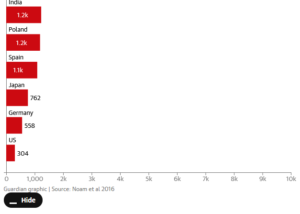 Switzer pointed to America’s “media mind meld” of an “intense left-liberal bias”  – yet America actually has the most diverse media ownership of all the countries studied in the report, according to the Guardian.

If I were a betting man, I might think the mainstream media or, more particularly, the Murdoch press, was getting a little worried about its declining empire.

The Australian sure went after Kevin Rudd (again) this week, suggesting he had engaged foreign-based actors to prop up his petition for a royal commission. 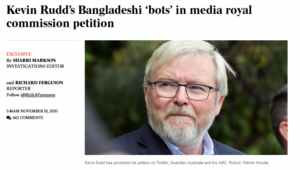 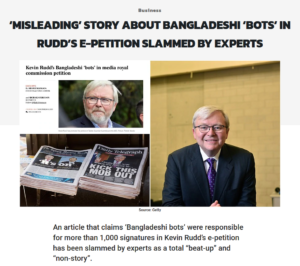 The story was rapidly debunked as laughable. 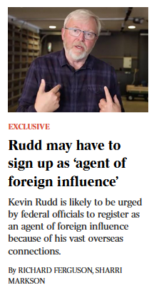 If nothing else, even taking out the 1,000 supposed bot-generated of the 501,000 signatures leaves … approximately 500,000 legitimate signatures of Australians on the petition.

Surely one of the softest 1-2 punches ever. I wonder if the nationalised American Rupert Murdoch has signed up as an “agent of foreign influence”.

And why on earth would we need a more diverse media? 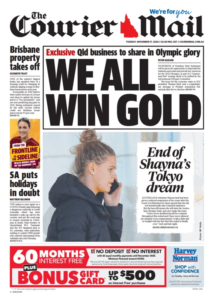 The $1 billion-plus payout to victims of the Coalition’s Robodebt scheme was the lead story on Page 1 of The Age, while it was also on the front page of the Sydney Morning Herald.

The story even snuck in to all the daily tabloids … as long as readers had the patience to get past the first 10 pages.

The Australian even found room to blame Robodebt on the Tax Office, not the Coalition ministers who oversaw this scheme over many years.

Meanwhile over on Sky News Minister Stuart Robert was claiming that he had stopped the flawed scheme as soon as he became aware of issues with how ATO data was being used.

Sky News host Laura Jayes later tweeted that it was a “breathtaking” claim, and noted Robert’s “post-truth politics”. The New Daily also called out the claim, explaining that Robert had continued to defend the program even in the face of evidence that one in five raised debts were incorrect. However, no other media seemed to have space to take issue with Robert’s extraordinary claims.

And yet another outbreak of Covid-19 from hotel quarantine that has caused panic buying and a complete lockdown in Melbourne, sorry, Adelaide. The Coalition’s line is that this one is completely different from the Victorian situation. It’s unclear what the differences are.

Only Adelaide’s The Advertiser reported on the dozens of breaches of hotel quarantine: 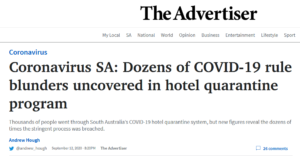 Federal Trade Minister Simon Birmingham on ABC Radio National was quick to give another airing of the completely debunked story about security guards having sex with returned travellers.

However, host Hamish Macdonald wasted no time in suggesting Birmingham check his facts. Birmingham doesn’t need facts; he has The Herald Sun.

The mainstream media went on to excoriate the federal government for:

Piers Akerman at The Daily Telegraph assured us that he has “never been instructed to present the news in any way but honestly”. He also wasn’t happy that Malcolm Turnbull had on ABC’s Q&A criticised the company’s coverage of the bushfire season.

Some 3.4% of 3335 articles still means the publication of about 113 articles related to arson and bushfires. That’s (approximately) 113 more articles than there were bushfires caused by arson, and at a rate of close to one article a day over a four-month period.

Chris Mitchell also reckoned that Australia was committed to net-zero emissions by definition as part of the Paris Climate Accord:

The Paris Climate Accord says nothing about net zero emissions – it requires a 26-28% fall in emissions from 2005 levels for Australia.

We could also argue Australia is committed to net zero if we define net zero as zero action on climate change.

To regulate or not

A mum of seven allegedly led the syndicate that made $800,000 from welfare fraud. Lower down in the article, we are told the alleged principal offender of the scam was a male, 30-year-old hairdresser.

But no doubt the “mother of seven” makes it a much snappier story.