Tamed Estate: youth excoriated for their behaviour, not so senior citizens

On the journey of Covid-19 and “enemies of the state”, hotel quarantine, sycophancy, the vaccine, MPs’report cards, and Reds under the … somewhere.

Australia’s streak of no community Covid-19 transmission was ended by a breach in hotel quarantine, with the virus thought to have entered the country via airline crew from the United States. As with the recent outbreak in South Australia, the words “hotel quarantine” or “fiasco” were scarcely mentioned – evidently such words are reserved for breaches in the Victorian hotel quarantine system.

Despite this being the second potential devastating failure of Sydney’s hotel quarantine system, the blame was placed squarely on the individuals – not the government, as we have seen elsewhere.

Covid-19 was then taken on a merry journey around the Northern Beaches of Sydney, allegedly by a couple in their 60s and 70s who followed the lead set by NSW Premier Gladys Berejiklian in failing to self-isolate while experiencing symptoms of Covid and awaiting a positive test result, according to The Australian.

This part of the story was swiftly moved off the front page – a luxury not afforded to two teenage girls who tested positive for Covid in Brisbane after a trip to Melbourne.

According to excoriating headlines, the two girls clearly should have known better, and were thus plastered across the front pages of The Courier Mail as “Enemies of the State”; as “Dumb and dumber” in The Herald Sun, News Corp’s two tabloids. 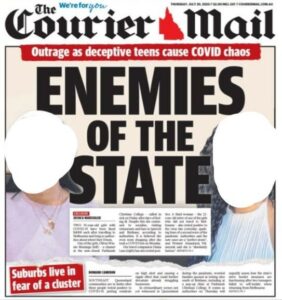 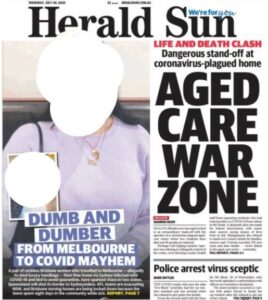 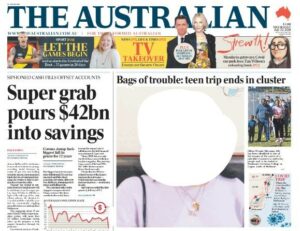 Luckily for the older couple, the media recognised that they hadn’t yet learned to exercise good judgment or follow health advice, even in a global pandemic where their age group remains a high-risk category.

Not to worry though; Gladys Berejiklian had a battle plan in place to save Christmas.

The first drafts of the article posted online explained that the battle plan consisted of politely asking Northern Beaches residents to stay home and wear a mask.

The announcement of a lockdown came only after the Northern Beaches council had ordered the shut-down of a host of gyms, playground and community centres; only after 14 of 17 pubs closed voluntarily. But no, Gladys most definitely had a “battle plan”.

I wonder if the next few weeks will have any bearing on Berejiklian’s end-of-year grade.

Despite a year of scandals, from her relationship with disgraced MP Daryl Maguire to the infamous “I don’t need to know about that bit” re his grand plans; from her admission of pork-barrelling to the destruction of documents relating to $250 million in community grants; from paying $53 million over the odds for land in Camellia ad infinitum, The Daily Telegraph still saw fit to give her an A grade for the year.

But that shouldn’t be a surprise. The paper is remarkably forgiving towards Liberal politicians, both on the state and federal levels:

It wasn’t just News Corp. The Sydney Morning Herald’s Rob Harris, who has form on puff pieces, followed up with two more over the weekend – on the cabinet reshuffle and, particularly, Dan Tehan.

Among some of the highlights:

“He knows the job like the back of his hand.”

“Tehan’s time in the education portfolio gives him an incredible insight into the importance of international students.”

“Almost every element of the nation’s recovery will affected by its relationship with China. Morrison knows this and that’s why he’s given Mr Fix-It Tehan the role.”

“It will take all his charm-and-disarm style and diplomatic nous to overcome the challenge he now faces as Australia’s new minister for trade and investment.”

As for Dan Tehan’s impressive credentials for Trade Minister based on his diplomatic nous and his role as a “diplomat”? It appears they are based on his posting as third secretary at the Australian embassy in Mexico. Just the man for the job.

After a year of dismissing the threat of Covid-19 and calling for easing of restrictions, the Australian-born, American-nationalised Rupert Murdoch was at the front of the queue for a Covid vaccine at the expense of British taxpayers.

But that didn’t stop The Australian’s Adam Creighton going back to the well that has served him so poorly all year, banging on about how good Sweden is – despite the fact that many of the Nordic nation’s leaders have changed their tune; and despite the fact that Swedes will restrict gatherings to four people in restaurants and close high schools until the end of January.

And despite Swedish King Carl XVI saying the country’s coronavirus approach had failed, with Sweden’s Prime Minister Stefan Lofven saying he agreed with the king’s remarks.

Nor did it stop The Australian running a discussion on the whether or not to get the Covid-19 vaccine – a highly charged, sensitive topic given the proportion of people who express doubt.

Fortunately, the newspaper got an expert on board: A Sky News panellist and founder of a communications company.

Finally, News Corp Sharri Markson and Miranda Devine worked themselves into a lather about leaked details of

However, As Crikey reported, there are some 95 million members of the Chinese Communist Party, and:

Devine and Markson were the only two journalists to report on this “story”. But that didn’t stop another editorial from The Australian: but no outrage expressed at the fact that DFAT is still using a Beijing agency to recruit staffers. And nary a China expert in sight among the fear-mongering. 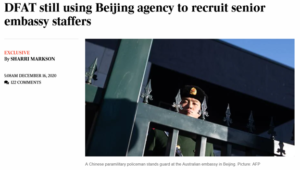