The them and us narrative 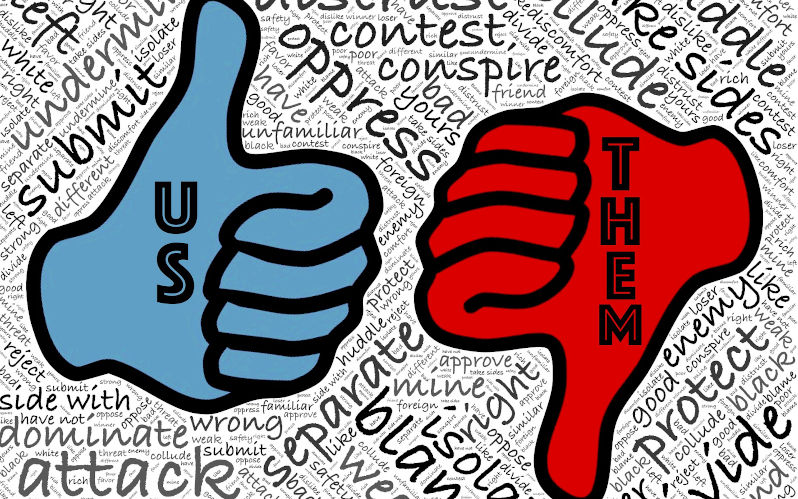 The scourge that looms large in the present conflicts between the West and Russia/China is the “Them” and “Us” narrative that seems to pervade analysis of geopolitics.

Such a concept generally goes unnoticed primarily because of a US/Euro-centric view of the world. In a recent article in Pearls and Irritations (Dated June 26th 2022), Hugh White reflected, “Then we can judge how far we can afford to accommodate them before the costs and risks of doing so exceed the costs and risks of the war we would need to fight to stop them… We also need to recognise and meditate on what might have happened had ‘our side’ not won the last two major power wars. Because we might not win the next one.”

The second iteration of “our side” failed to acknowledge the fact that the Soviet Union and China were also part of “our side”. The Russia fought valiantly on the eastern front (estimated to be at the cost of about 14 – 20 million lives; both military and civilian) to defeat the Germans in WWII; and an almost equivalent number of people in China died holding down the Japanese that assisted the Allies in winning the war in the east. They were also part of “our side” in WWI with Russia playing a major role and China a minor one. Plainly “our side” without the Soviet Union and China would have made victory a lot harder, if not impossible.

This “Them” and “Us” narrative was put forward very strongly by Joe Biden in March 2021 promising that China will not become the leading country in the world under his watch . He said he saw stiff competition with China. While one would imagine this competition to be an economic one, what was left unsaid was filled in later by Anthony Blinken who accused China on issues such as crackdowns in Xinjiang, Taiwan and Hong Kong and the unending narrative about cyber attacks. In the US’s attempts to paint itself as the unblemished champion of democracy and human rights and pour scorn on authoritarian governments, it suffers amnesia over its relationships with other nations that are or were authoritarian by any definition. Moreover, assassinating “enemies” with drones is not exactly a shining example of human rights behaviour. A comprehensive account of the US “awkward” relationships is given in Politico (https://www.politico.com › magazine › story › 2014/02). Such “them” vs “us” or “bad” vs “good” dichotomies do nothing for the US itself or those looking to the US for leadership and security. They are just words that compromise both security and economic advancement.

In his most recent article, Hugh White indeed reiterated the uncompromising attitude of the US towards China: “Washington has made it clear that it has no interest in seeking an accommodation with China that would meet any of China’s aims to expand its influence in Asia and beyond.” What has eluded many observers is that China’s influence in the region and beyond will grow as it becomes a more important trading partner of the respective countries, and I might add, whether it likes it or not. What the Western media attempt to cast is a China deliberately seeking a hegemonic position ahead of the US. This narrative makes it easier for them to portray China through a Western-centric interpretation of its intentions, invariably a nefarious one imposed. To be fair, one might just as rightly see its engagements with nations around the world, and the growing influence that comes with it, as an economic necessity to keep its promise to its own people of developing a moderately wealthy society. Manufacturing and trade is at the centre of making this promise come true.

In working out “hypothetical” strategies to counter the so labelled “Chinese expansionism” many analysts have taken to using examples from the 1st and 2nd World War, effectively denying historicism. The Chinese mind is not a German or Nazi one, given the cultural and time differences. One dissimilarity and an abiding characteristic throughout the ages is the Chinese fear of chaos (phonetically pronounced as “Luan”) brought about by the loss of a stable government or war.

The best lesson that can be learnt from WWI is that alliances drag countries so allied into the conflict, escalating a regional problem into a major war. Presently the expanded NATO in Europe and neo-NATO alliances such as AUKUS and QUAD in the East are reflexive arrangements that got the world into trouble in WWI. The world’s leaders today have to think differently because the actors are different and the consequences of a major war today will be very different. The difference for a start is that the weapons that the world powers possess today are so destructive that no humans will survive an all out conflict. Moreover, we now have four major power blocks US/NATO/Russia/China each with different needs and agendas. Through globalisation, trade and investments, we are also a much more economically integrated and mutually dependent world.

If China were to be the designated “enemy” of the Western powers, then attention should be paid to cultural differences, especially in communication. In Western political discourse, the obvious practice is to articulate political rhetoric from which real intentions are interpreted. A good example is the US’s strategic ambiguity about Taiwan. Given this scenario, when the Chinese articulate their real intentions, they are taken as another Western style political rhetoric and not taken in their proper light. The Chinese redline is Taiwanese declaration of independence. The Taiwanese, being culturally Chinese, understand the gravity of breaching the redline and have never declared independence despite ambiguous promises of support from the US. Sinophobes, whether of the Murdoch media or the ABC, have made all manner of readings about nefarious Chinese intentions, driving ill informed people into hysteria about our national security; and politicians into making costly decisions at the expense of trade and making expensive but pointless investments in nuclear submarines.

Liberal leader Peter Dutton’s precept that if we want peace, we should be prepared for war should be replaced by Confucius’ maxim that if we are thinking of destroying our enemy, we should dig two graves.