Tessa Morris-Suzuki. Tony Abbott, What have you done for peace?

On 23 February, Prime Minister Tony Abbott in a major national security speech, chided Muslim leaders for showing insufficiently sincere commitment to peace. “I’ve often heard western leaders describe Islam as a ‘religion of peace’. I wish more Muslim leaders would say that more often, and mean it”, he said. Abbott also called on immigrants to Australia to “be as tolerant of others as we are of them”.

The vast majority of Australians are appalled by the cruel and ultimately self-destructive violence of groups like ISIS, and by the crimes of the clearly deranged Martin Place gunman. They rightly applaud when leading Muslim figures speak up for peace, as the Grand Mufti of Australia and the Australian National Imam’s Council did in unequivocally condemning the Martin Place violence, and as the head of the Paris Mosque and other French Muslim leaders did in denouncing the “odious crimes” of the Charlie Hebdo attackers.

But let us turn the question around: Tony Abbott, what have you done to bring peace to our community? At a time of rising Islamophobia and widespread ignorance in the Australian community about the history and teachings of Islam, better education promoting ethnic and religious harmony and mutual understanding is desperately needed. Where is the Abbott government’s leadership on this? Peace cannot be imposed simply by tightening security laws. It requires long-term sustained and serious commitment to building the foundations for social harmony. What plans or policies have Abbott or his ministers put in place to create a more tolerant and harmonious Australian society?

Last September, in a speech to the National Press Club, Abbott said ‘I’ve shifted from being a critic to a supporter of multiculturalism, because it eventually dawned on me that migrants were coming to Australia not to change us but to join us.’ But multicultural harmony does not just happen by itself. It requires hard work to sustain it. Where are the signs of the Abbott government’s hard work? Where is the evidence that our prime minister means it when he speaks of multiculturalism?

I live in Canberra, a city with the highest standard of living and the highest education levels in the Australia, and I supervise a substantial number of Asian postgraduate students who come to this country to study, and some of whom go on be become Australian citizens. Many Asian students I have supervised has spoken to me of encountering racist abuse on the streets of our capital city. Incidents (including being insulted and spat at by complete strangers) have left some of them shocked and deeply shaken. Is this what Abbott means when he asks immigrants to Australia to “be as tolerant of others as we are of them”?

The fact that this sort of abuse still occurs unchecked in our national capital is an alarming indication of the failure of government, educators and media to show leadership in creating a peaceful multicultural society. By ignoring these profound issues, while making ignorant and ill-conceived public criticisms of “immigrants” and “Muslims” for their lack of commitment to tolerance and peace, the Abbott government is damaging the social cohesion of our society and contributing to social problems that are likely to haunt Australia for decades to come.

Australia needs leaders who mean it when they speak of peace, harmony and multiculturalism. If our current leaders cannot do this, then they are unfit to lead, and it is time for others to step forward and show that they can fill the political and moral vacuum.

Tessa Morris-Suzuki is an ANU College of Asia and the Pacific Japanese history professor and an Australian Research Council Laureate Fellow. 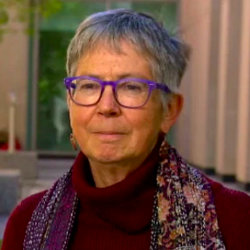