The ACT election on Saturday was the 15th consecutive Australian election in which the Liberal Party has lost ground. Why has it swung so far to the right, away from its own principles?

The usual story about the ACT election is that because the ACT is a Labor stronghold Labor was bound to be returned to office. The ACT has hardly any rural population outside Canberra and its employment base is heavily represented by public servants and academics – all the conditions that make for a left-leaning electorate. Most people saw a re-elected Labor-Green government inevitable.

That’s only part of the story, however, because Labor did not do particularly well. At this stage, with 81 per cent of the vote counted, there has actually been a small (0.3 percent) swing against Labor. The big swing is a 3.4 per cent gain in the Green vote, accompanied by a 3.3 per cent fall in the Liberal vote.

The Liberals went into the election with little expectation of winning office, but they did expect to dent the government’s support. Labor or Labor-Green governments have been in power for 19 years, and are looking tired; a promised expansion of the overcrowded Canberra Hospital has been on hold; and many people believe that the Barr Government is too close to property developers – accusations of cosiness rather than corruption. And, as Canberra grows and ages, it is starting to look like any other Australian capital city:  relatively fewer public servants and academics, relatively more tradespeople and small business people, and relatively more older people. By this logic, the ACT should be reverting towards the national mean.

But these trends did not help the Liberals, who went into the election with what might be called a small scale of Morrison’s economic policy. Their platform was about putting money into people’s pockets with promises to freeze rates (Canberra rates are already high), to reduce car registration fees and to give some minor handouts – a fistful of dollars. There was little about improving government services or investing in infrastructure.

It failed to sell.

Deficits are OK – essential in the current situation. But we must have something to show for them; otherwise they simply fund current consumption at the expense of future liabilities. That was the flaw in the ACT Liberals’ policy and is one of the big flaws in the federal Coalition’s policy.

Why did the Greens do so well?

The Greens did well, not only in their primary vote, but also in terms of seats, in the ACT’s 25-member Assembly, elected on a Hare-Clark system with five electorates of five members each. They will have at least four members – possibly 5 or even 6 – more than enough to hold the balance of power.

Their success was unexpected: on election night some of the successful Green candidates looked gobsmacked, as if Antony Green’s computer program had some terrible flaw. After all the Barr Government has a reasonably good environmental record, including a 100 per cent renewable electricity supply and a phase-out of gas. In comparison with NSW Labor, ACT Labor has a strong commitment to dealing with climate change. There was no strong environmental reason to vote against Labor.

There is no obvious explanation for the Greens’ success, but some credit must be due to the fact that the ACT Greens have a track record in shaping realistic and implementable government policies – until 2016 in cross-bench agreements, and in 2016-2020 with their leader holding several portfolios in government. They conform more to the style of green parties in mainland Europe than to the stereotype of tree-huggers and environmental warriors portrayed by their political opponents. And unlike the Federal Greens they have engaged in practical politics, rather than at times standing petulantly on purist principles, wrecking the Labor Party’s attempts to deal with difficult problems.

Back to the Liberals

This is now the 15th Australian election since 2014 in which the Liberals have lost ground in their primary vote.  The party swings are shown in the table below – see the blue column. 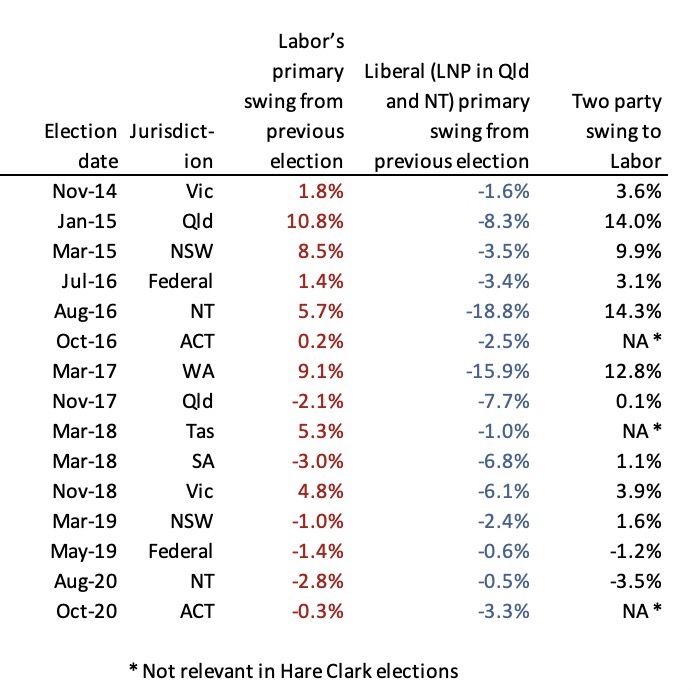 Some may query results such as the 2018 South Australian election, when the Liberals won office while losing the vote, but this was partly because there was another centre-right party (SA Best) in the contest, and a distribution bias that had unfairly benefited Labor was rectified.

The Liberals’ general success in gaining and holding office lies not in their primary vote, but in their alliances with parties further on the right – with the National Party in formal coalition, and with parties such as One Nation and Clive Palmer’s UAP in preference deals.

Which brings us back to the ACT, where mathematically the Liberals could still conceivably form government. Neither Labor nor Liberals can form a majority government; the Greens have to be brought in through a crossbench or coalition agreement.

We take it for granted that there won’t be a Liberal-Green government, however, and indeed the Greens rejected such a deal before the election. But why is such a deal beyond our imagination? Austria, for example, is governed by a coalition between the centre-right People’s Party and the Greens.

We complain about political polarisation – “toxic partisanship” – and its corrosive effect on our public life. Much responsibility for this dismal situation has to be sheeted home to the Liberal Party. As it has been losing ground in its primary vote its dependence on parties further on the right has dragged it in that direction. The way the National Party was able to dictate the Liberal Party’s energy policy, and to see the Liberal Party throw out Turnbull, is a strong case in point.

It doesn’t have to be this way.