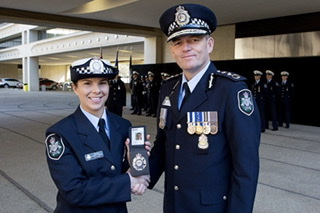 Some of the AFP commissioners have entrenched the AFP’s reputation as the most politicised force in the country. When one considers the NSW and Victoria Police, that is really saying something.

Australian Federal Police Commissioner Reece Kershaw may have meant well in imploring that victims of sexual assaults, or those aware of sexual assault crimes, go straight to the police, not to politicians or the media. A cynic might respond that most Commonwealth-level misbehaviour gets investigated, even by police, only when the media is already involved.

But the prime minister, Scott Morrison was wrong in deducing from Kershaw’s letter a need to make the AFP a clearinghouse of allegations of offences against the criminal laws of the states and territories. Likewise, using this newly invented principle as a reason for pretending that he need not even bother himself to read detailed allegations.

There were several vices in what happened. Assuming that the ostentatious act of passing on the materials, sight unseen, actually happened, it showed just why it was not a good idea. Allegations alleging rape, a long time ago, by the Attorney-General, Christian Porter were accompanied by nearly 40 pages of supporting material. Yet the collective wit of the senior AFP thought only to send a short email summary of the allegations – sans any of the detail – to the NSW Police.

It is true that the scant detail contained the information (already known in any event to NSW Police) that the alleged victim was dead. This might have enabled the AFP geniuses to deduce immediately that a prosecution was thus impossible, thus completely closing the matter. This was probably the practical consequence, but not as a matter of law. It is possible for a sexual assault case to proceed without a live victim. George Pell, for example, was charged and convicted of a sexual assault on a choirboy who had committed suicide well before the charges were laid. His conviction was quashed by a unanimous High Court, but not on the grounds that such a prosecution was legally impossible.

NSW Police, in the person of its voluble Commissioner, Mick Fuller, soon ruled out any prosecution and spent much of the next week rowing back from his general pronouncements about an investigation with which his sexual assault unit detectives were familiar, the fact that an email purporting to be from the victim had asked police to suspend the inquiry shortly before she is said to have committed suicide, and the practical difficulties of a trial without a live victim. He was also explaining, in less than satisfactory terms, why detectives had not flown to Adelaide, out of the NSW jurisdiction, to get a signed statement from the woman, even before travel restrictions caused by the pandemic, or later during those restrictions. Or, indeed, why NSW police did not ask South Australian cops to go to the woman’s house, to have her sign her statement, and then to forward it on. This is something that happens all the time, in normal cases.

What was also quickly on display was that both the Commissioner and his deputy had been all over the case, from the time that the woman first complained to NSW Police. They held several meetings, including with investigating detectives, although we have not been let in on the secret of what directions were given about the conduct of the investigation, other than (inferentially) a decision to postpone going to Adelaide.

I do not suggest that this close attention from the higher-ups was designed to sabotage the investigation. But the interventions of the political and managerial classes of a police force on the professional investigations of experienced detectives are never welcomed by the detectives themselves and create a serious risk of compromising an investigation, or even the police force itself. This is probably not something which would much trouble Mick Fuller, who trades to a degree on his being “a character”, with self-granted leeway to be planning a political career, to have multiple personal conflicts of interest, and to play favourites in the enforcement of the law.

His personal style has involved a reluctance to discipline violent cops if he thinks they have had a bad day, or to opine, after criticism of illegal and indiscriminate police strip searches of young people that they needed to learn a healthy terror of the law, and guardians of it, such as himself.

With long successions of “character” police commissioners and regular corruption allegations, it may well be that Fuller does not care much about the reputation of his force, at least as long as he has the state premier in his thrall (as he does). If he did, he would have rather more concern for appearances.

But so might the AFP Commissioner, who has yet to explain just why and how the ACT AFP Commissioner saw fit to attend on the Minister for Defence and her chief of staff soon after a staffer was found by parliamentary security staff in the minister’s office, in a dishevelled condition suggestive of sexual assault. By the time that the ACT Commissioner arrived, the woman had complained of sexual assault to ACT AFP detectives.

We want commissioners of character, not folk who are ‘characters’

The ACT Commissioner’s visit to the minister was one of a large number of occurrences in the aftermath of the alleged rape, of which the victim was entirely unaware until two years later.

Reece Kershaw found himself deeply professionally embarrassed when, as a deputy NT Police Commissioner, his commissioner tried improperly to interfere in an investigation affecting his mistress. Kershaw steered his way through the crisis, but ought to have learnt from it the fundamental dangers of too close relations with ministers, and of the heads-up principle.

Perhaps the commissioner was intending merely to give the minister a “heads-up” about ongoing police inquiries, but if that is what he was doing, his judgment is open to question because, as we have seen, the minister was inevitably to be a player in the aftermath of the case, not a disinterested observer. The heads-up is not supposed to be a privileged opportunity, not given to other interested parties, to begin preparing the alibis. It seems that it was, for example, after this meeting that the minister decided not to tell the Prime Minister – a decision that the ultra-loyal Peter Dutton may also have made about the same time.

Unlike all other Australian police forces, the AFP is not a force of what might be called general jurisdiction. The ACT precinct is, of course. One can complain to them of rape, or murder, or a fraud, and it has the power – even the duty – to immediately launch an investigation. But the national AFP does not have a general brief to investigate fraud on the Commonwealth, corruption by a senior minister, or bribery with political donations. It must await a reference from a relevant Commonwealth agency. Easy enough to come by with alleged social security fraud, or the theft of money by a public servant. Rather less common with a high-level crime, a reason why the AFP, unlike the FBI or Scotland Yard, never conducts own-motion investigations, or stings, with corruption.

The ambitions of the Home Affairs Minister and his department has tended to undermine the independence and apartness of notionally autonomous stand-alone statutory bodies, such as the AFP and ASIO. That and the character (and post-commissionership ambitions) of some of the commissioners have entrenched the AFP’s reputation as the most politicised force in the country. When one considers the NSW and Victoria Police, that is really saying something.