The Australian War Memorial avoids the central issue: Why did we fight so many immoral, corrupt and failed wars?

Meet Gustav, the German messenger dog. Running through the deadly orange mist of mustard gas to deliver a message to trenched in German soldiers. Yes, the gas mask is very interesting. It is just one of countless items on display at the Australian War Memorial. The collection is world class I might add because it does a very good job telling us how we fought. It does a bad job in explaining why we fought. 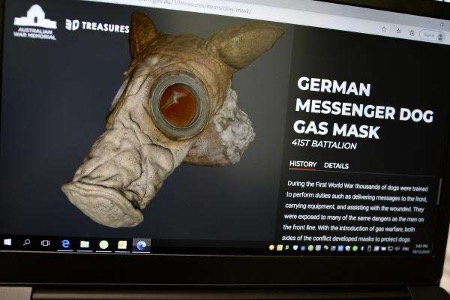 World class, I might add because it does a very good job telling us how we fought. It does a bad job in explaining why we fought. Gazing at Gustav is no different to gawking at Ned Kelly’s armour in the State Library of Victoria. Visitors leave high on fascination but low on insights.

That’s because “why” answers are a curator’s nightmare and are rarely woven into display information. Memorial displays can be so fascinating, like Gustav, or so in the moment sombre, such as the Tomb of the Unknown Soldier, that they soak up most of our attention. But that attention can be superficial and often only lasts until one is before the next perfectly presented diorama. Yes, mounting a “why” exhibition is controversial and to include it in exhibitions requires a rare expression of curatorial courage.

That courage is absent at the Australian War Memorial. It dismally falls short of its duty of care to explain history not just describe. It is after all a publicly funded museum, not an outreach of the Department of Defence. This failure is cumulative when it embellishes, and exaggerates material and events it is describing. No better example waits us then the troubled Australia’s War in Afghanistan exhibition, still standing after the Brereton Inquiry expose of criminal activity by our soldiers in Afghanistan.

Lie #1 Visitors to that exhibition are told “Half a world away Australians are serving their country by building another”. Sorry…what? Afghanistan is a sad basket case of corruption, invasion and poverty. Who will remind the Australian people that it was Prime Minister John Howard, star-struck by the pomp and grandeur of imperial Washington, who offered up Australian soldiers to back America’s capricious vendetta against Afghanistan, the poorest country in the world? They and their international partners, over a 19-year multi-force engagement, left the local populations to dig up to 86,823 graves for Afghan civilians; men women and children killed.

Lie #2. The Memorial’s slick presentation continues, “They have built schools, roads, and hospitals”. True, but Australian troops and their coalition partners also blew up schools, destroyed roads and bombed hospitals if their intel told them that the Taliban were hanging around.

Exaggeration #1. “They have demonstrated bravery and dedication beyond compare”. What? Better then the Dutch, the British, or the other partners. What nonsense.

Exaggeration #2. Afghanistan [is] now indelibly linked to Australia’s national story. Really. Most people would not know the name of the capital. How is it linked? Oh, I know. The Memorial is talking about the northern debt to the nineteenth century Afghan cameleers.

Lie #3. Over time, the display will change and evolve as more veterans share their stories. With the War Memorial Council refusing to take the exhibition down in light of the Brereton findings, one wonders whether there is any credibility left in this exhibition that would encourage further veteran inputs.

Visitors to the Australian War Memorial this Anzac Day will experience a Khaki Disneyland. Who said war and death can’t be fun?  Hop on an emotional rollercoaster and spin round corners to vicariously witness an ambush captured on a gripping wide screen video. Let the roller coaster take you to heights where you see smiling Afghan children taking lollies from soldiers. Let it whiz you past the awesome killing technologies. Wow! Block your ears to the rat, tat, tat of an F88 Austeyr assault rifle. Hold your breath as a Special Forces soldier takes position with his SR98 sniper rifle. Eyes wide open as a Special Forces soldier readies for a mission by strapping on a 9mm Heckler & Koch pistol. Oh! Just enough time before heading to the cafeteria to hop in a simulation ride in a U-60 Black Hawk helicopter. After lunch visit the Hall of Valour and see the Victoria Crosses awarded to Mark Donaldson, Daniel Keighan, Ben Roberts-Smith (ahem!), and Cameron Baird (posthumous) and read accounts of their bravery in Afghanistan.

Grandma musters her grandchildren for the short ride home. “That was great grandma. It was better than Dreamworld”.

Well kids, do I have news for you! There is a $500million expansion about to start! For the last eight years a war for ground control has been waged between the “expanders” and the “traditionalists”. The “traditionalists” want the Memorial to rein in its territorial ambitions. Brendon Kelson, a former director (1990-1994) said that of the nearly 103,000 people named on the Memorial’s Roll of Honour, 99 per cent were killed before 1950. In the last 70 years, just over 1000 have died in action. “Yet”, he said, “recent showman-directors of the Memorial appear hell bent on bloating the range of exhibitions, thereby presenting an historically unbalanced experience”.

The “traditionalists” honour the original aspiration for the Memorial as set out by Lord Gowrie VC, the Governor-General, with great simplicity when he opened the site in 1941. He said it “would be a reminder to future generations of the barbarity and futility of modern war”. The Great War, he said, settled nothing. All concerned came out losers. Those who visited this shrine, he said, would declare, “Never again, never again”.

The cry “never again” came from deep within a traumatised generation which lost 62,000 diggers in World War I, 15,000 to Spanish flu in 1919 and then had to go on and face the Great Depression. As the great doors of the Memorial silently swung open in November 1941, Australia was only months away from facing 1942, our worst year of World War II. That was 75 years ago.

Anzac speeches at the Memorial now do not ring out with such “never again” determination. In fact, a dangerous “ever again” resignation permeates the speeches. An advertisement from one of the memorial’s favourite arms dealers, Lockheed Martin, says it all. The advertisement features an impressive picture of a jet fighter with the caption “The threats never stop evolving. Neither does the F-16”.

New threats, new wars to fight, new armaments to buy…this is the new narrative. No one, it seems in these circles, is looking for peace.