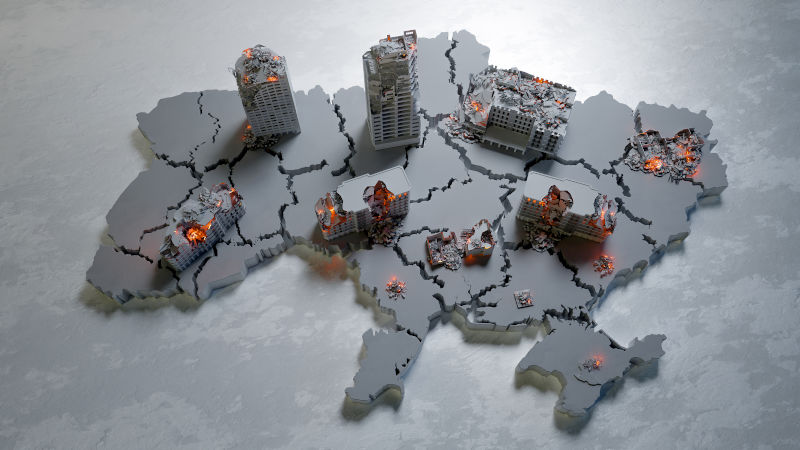 Russia had long-standing and legitimate security concerns that have now been overtaken by its barbaric actions. Image: iStock

Instead of making Russia important and respected Putin has taken on the mantle of Hitler and his ruthless troops are now equated with the Wehrmacht. How long can the West witness the murder of civilians and the destruction of their homes before demanding Russia stop its atrocities or face direct NATO intervention?

Such a simple statement, though ambiguous, might deter Putin from his latest strategy of having his army retreat to the Russophile Donbas region but continue to fire rockets on Kyiv and other populated centres of Ukraine.

Russia will pay a heavy price for its blunder to try more that annex its naval base in Crimea and the pro-Russian provinces of Donbas. It’s now facing:

Disturbingly, polling shows two thirds of Russians support the “special military operation” (the use of the word “invasion” is illegal) in Ukraine because state television tells them it is a quasi-holy struggle against Fascism. So Putin’s mindset is now extends to ordinary Russian citizens which makes any meaningful peace settlement with Ukraine let alone reproachment between Europe nigh impossible

The question is whether China, also an autocracy, will behave like Russia. I don’t believe so because China’s objective is not imperialist, but “consolidationist” – it wants to reinforce its sovereignty not expand its borders. Its guiding foreign policy principle is “safeguarding national independence and state sovereignty, and creating an international environment favourable to its reform, opening and modernization efforts, as well as maintaining world peace and promoting common development.”. China has been careful to stay out of foreign wars. Like India it has refused to condemn Russia’s invasion, but also it did not oppose the resolution in the UN general assembly blaming Russia for the Ukraine war. China’s security priority (to keep Russia, its biggest neighbour, out of the Western sphere of interest) drove its decision as did India’s (whose military is heavily dependent on Russian equipment to confront its main enemy, Pakistan, that aligns with China).

China’s war record stands in sharp contrast to America’s invasion of Iraq and Russia’s ill-fated occupation of Afghanistan and military intervention in Georgia and Syria.

In Putin’s speeches, before Russia invaded Ukraine, he claimed:
Russians and Ukrainians are one people divided artificially by borders and outsiders
It would be a decisive battle to protect Russia’s rightful imperial hold over Europe’s east.

Ironically, Russia had long-standing and legitimate security concerns that have now been overtaken by its barbaric actions suggesting its true motive was expansionary, not defensive:

The USA promised Russia when the Soviet Union was dissolving that NATO would not extend east beyond a reunified Germany. If Ukraine joined NATO, its troops and missiles could be stationed along much of Russia’s border with Europe and Russia would have lost its key naval base in Crimea. The two Russophile provinces of the Donbas region of eastern Ukraine never got the autonomy that Ukraine pledged in the Minks Agreement of 2014. Instead, when they broke away, they were besieged by Ukraine troops including the quasi-fascist Azov Battalion.

Biden dismissed Russia’s security concerns and supported its right to join NATO when he had a teleconference with Putin. That undercut efforts by Macron and Scholz to obtain a pledge from Russia not to invade Ukraine if it pledged to be militarily neutral and stay out of NATO (like Finland).

Russia will now achieve the very opposite of what it wanted – all of Europe joining NATO and ending its dependence on Russian oil and gas which is the lifeblood of Russia’s economy. Instead of making Russia important and respected Putin has taken on the mantle of Hitler and his ruthless troops are now equated with the Wehrmacht. And humiliatingly, Russia’s military might is exposed as a sham by the self-defence army of its smaller neighbour. But for its nuclear arsenal Russia would no longer rate as a superpower. And its traditional enemy China is now its only backstop to Western strangulation of its economy. Just as Belarus and Syria are client states of Russia, now Russia will become a client state of China.