The China threat industry and journalists who had never been to China, became sudden overnight experts 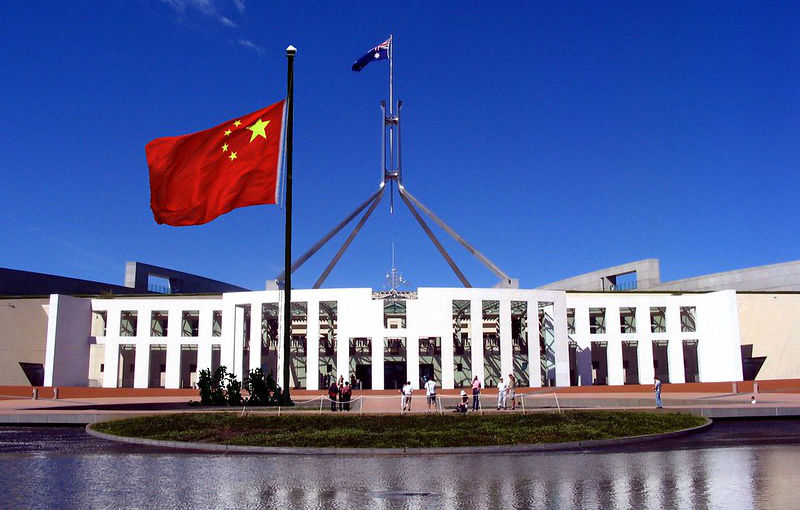 The Albanese Government seems unwilling to provide leadership to the community on how to understand the rise of China and as many qualified military analysts have pointed out, Australia now faces up to a twenty-year gap in our defence capability. So much for the threat.

In October 2019, I devoted my La Trobe University China Annual Oration to the China ‘Threat’, arguing that the purported external threat was used to reinforce concerns about the internal threat, and the other way around. China as both an internal and external threat were used in mutually reinforcing ways.

Naively, in retrospect, I also asserted that the then bilateral relationship had reached its lowest ebb. Six months later, the Foreign Minister, subsequently backed by the Prime Minister, blurted out a call for an international inquiry into the origins of Covid 19. The bilateral relationship then went into a tailspin plumbing depths unimaginable at the end of 2019.

By now it is well rehearsed that the Prime Minister made his call without consultation with like-minded countries or the WHO, that it followed a call from President Trump, and that it came in the middle of an intense, highly personalised, argument between the US and China over the pandemic’s origin.

China then imposed retaliatory trade measures against Australia – economic coercion when applied by China, sanctions when we do it against Russia. From there the narrative on Australia’s side rapidly took hold that China was a bully, that we were only standing up for our values and we would never compromise them, and it was China that had changed, not Australia.

The Government’s victim narrative was able to take hold quickly, spread and become entrenched in public discourse because by then the ground had been well and truly laid for a complete breakdown in bilateral relations by several years of beating the drum over the China Threat.

Beginning with exposes of the evil doings of the United Front Work Department, Sam Dastyari’s recklessness, foolishness, or whatever, set off a feeding frenzy in the media. Fairfax and Murdoch organs raced to outdo each other in revelations attributing all sorts of evil doing to the dark hand of the United Front Work Department. Journalists, some of whom had never been to China, became overnight experts on the inner workings of that secretive department of the Chinese party-state bureaucracy.

This febrile atmosphere led Turnbull to introduce anti-foreign interference legislation. While it was meant to apply equally to all foreign countries, his speaking in Mandarin in support of the legislation made it abundantly clear at whom it was principally aimed.

Meanwhile, a veritable new industry emerged of China ‘literate’ consultants warning darkly of the threat the China party-state posed to their businesses from cyber theft, to Chinese employees who might be spies. They were selling services advising how to harden their customers’ business against the China Threat. Of course, the more the ‘threat’ was talked up, the better it was for business.

The security agencies also saw this as a big opportunity to raise, until then, their almost non-existent profile with the private sector. ASIO became particularly active knocking on the doors of corporate C-suites and Boards. Briefings were meant to be ‘strictly confidential’ which in companies also helped to create a sense of those in the ‘know’ and those outside. ASIO warned that corporate representatives should not take lap-tops and mobile phones into China. It created something a frisson around working visits to China.

One publicly listed company board on which I sat, and which made annual visits to China, started agonising over visiting China again, worrying about what security precautions to take and seeking further input from ASIO. I pointed out, resulting in a sense of disappointment, that as a publicly listed company everything was in the public domain already due ASX disclosure rules, other than customer-specific price information which was not discussed by the Board. As we were then not in a position financially to do any M&A, I suggested we could just give the Chinese a set of our Board papers!

At this time a low-level harassment campaign commenced against Chinese interests, including vetting visas for political reasons, deliberately slowing processing of some students and academic visas, harassment of Chinese state-owned media, increasing obstruction in the FIRB, increased monitoring of Chinese academics, and the occasional attempts to out Chinese agents of influence.  The latter was usually accompanied by much publicity, but seldom a conviction.

Despite relentless briefings, public and private, by security agencies, and the almost automatic attribution to China of any large-scale cyber hacking, few bodies have been found. At the same time, there has been no public accountability for the huge increase in resources allocated to quashing the China Threat. The public have a right to know what the return on their investment has been.

For sure, as China’s party-state became wealthier, stronger, and more assertive it would devote greater resources to foreign influence, cyber hacking, intellectual property theft, and spying in all its manifestations. Either in anticipation or response, states have an obligation to harden their defences. Arguably Australia had been sanguine about these things. China may consequently have seen Australia as a soft touch, an attractive target in view of its closeness to the US and UK, especially as a member of the Five-eyes.

Australia needed to do more. The China Threat certainly prompted that. But what has been entirely absent is any sense of proportionality and context. Public discussion became shrill, and any assertion made against China was inevitably accepted on face value without any debate. As I wrote last year in the AFR, the China Threat in Australia became a self-evident truth and remains so.

Throughout this period China’s own behaviour provided plenty of ammunition for the proponents of the China Threat. Efforts to inject more balance and context into the issue were as a result almost impossible. Beijing’s endorsed ‘wolf warrier’ diplomacy globally was a big mistake, redolent of arrogance and hubris, and threatening. Partly in response, infantile, anti-CPC groups like the Wolverines in the Australian parliament formed and somehow were accepted as normal. They were even publicly hosted by the US Embassy in Canberra.

China’s behaviour internationally fed directly into the sense of foreboding that the China Threat domestically was creating. Over the past five years, not only across the West but also in many developing countries, China’s standing as a trusted, likeable country – a country that can be counted on to do the right thing – has collapsed in opinion polls.

China has continued rapidly to build its military strength and significantly extend its technological capabilities. While this is not unexpected for a rising power, it is growing well ahead of nominal GDP. At the same time, China is coy about its strategic aims and ambitions thereby providing ample opportunity to impute all sorts of sinister and aggressive motives to its military spending.

Perhaps China does intend to become a threatening power. Its behaviour in the South China Sea has certainly added plenty of grist to that particular mill. Discussion of this question, however, is rarely in the context of what is China’s capacity to threaten other countries’ security. This is much less a question of military might, than of its freedom to act. Or rather, as discussed at length in my book, China’s Grand Strategy (MUP 2020), the constraints on its capacity to project power. This is the notion of ‘Prometheus Bound’.

The China Threat industry has no interest of course in discussing these questions because, as with the threat domestically, it is a self-evident truth. For sure, as a rising power, China challenges US regional hegemony. It may even have global ambitions, although a passing knowledge of Chinese history would make that seem most unlikely. But that is what rising powers do, by definition alone, they challenge the dominant power.

By excitably crowding out proper public discussion of China’s rise, and the serious challenges and opportunities it entails, the China Threat industry has cowed many voices, including the Australian business community’s, into silence. It has also allowed senior politicians to utter extreme views, such as before the election by then Defence Minister Peter Dutton, irresponsibly seeking short-term political gain.

Real consequences follow from this, apart from the costs of damage to Australia-China bilateral relations. It distorts national priorities. Would the unbelievably costly and most likely un-executable AUKUS submarine arrangement have been so easy to sell publicly without the China Threat? The irony of this is, of course, as many qualified military analysts have pointed out, Australia now faces up to a twenty-year gap in our defence capability. So much for the threat.

It has also fed negative racial attitudes and stereotyping of Australia’s long-standing and substantial ethnic Chinese community.  Senator Eric Abetz took this to an unprecedented low when he demanded ethnic Chinese Australian citizens declare their loyalty to Australia before a parliamentary committee.

Before the election, the extent that negative attitudes towards Chinese in Australia had spread in the community, and the concern even among the Morrison Government which had mastered the art of the China Threat, could be seen from Ministers such as Dutton trying to differentiate being Chinese from the CPC. The line became, ‘we have no problem with Chinese, just the Communist Party of China’. Presumably marginal seat polling was already showing that the China Threat narrative might cost them in seats which held relatively large ethnic Chinese communities. In the end it did.

Throughout this entire period, on issues of core national interest, the Labor opposition was silent. It did not seek to question the threat narrative, nor challenge the government over the damage it was causing to national priorities or the cohesiveness of multicultural Australia. It now finds itself in government. While the bellicose rhetoric has been dialled back somewhat, it still seems unwilling to provide leadership to the community on how to understand the rise of China and provide proportionality and context to potential threats that inevitably will need to be addressed.

As Australia and China approach 50 years of bilateral diplomatic relations, it would still seem that fear of the other will continue to keep alive the China Threat.