The cry of refugees 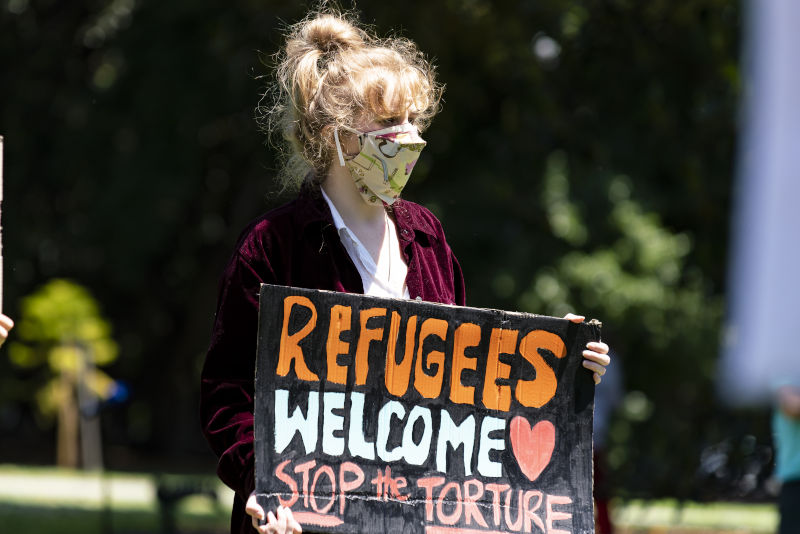 It will be the ongoing task of ordinary citizens to try and convince their fellow citizens that we can do better. Image: Wikimedia Commons

The Coalition remains committed to detaining asylum seekers in Australia if they have arrived by boat without a visa. The Labor Party has not made any commitment to cease such detention.

On Palm Sunday, we recalled that as Jesus was drawing near to Jerusalem, ‘the whole multitude of disciples began to rejoice and praise God with a loud voice for all the mighty works that they had seen’. Some of the Pharisees were disturbed by the scene and demanded that Jesus rebuke his disciples. He answered, ‘I tell you, if these were silent, the very stones would cry out.’

Once again, I, like many of you, will be marching in the annual Palm Sunday procession in support of refugees and asylum seekers this year. The theme for this year’s march is End the cruelty; freedom; safe and secure futures. After all these years I sometimes wonder, what’s the point. I retain the hope that even if we were to remain silent, the very stones would cry out. The land of the dispossessed would cry out. The country that has been home to the world’s longest living cultures would cry out.

Why am I marching? Because I still think the three major political parties (Labor, Liberal and National), one or two of which will form government again after the election next month, have policies in relation to refugees and asylum seekers which are wrong, which have been wrong for a long time, and which are likely to remain wrong for quite some time to come, no matter who is in government. The major parties obviously retain such policies thinking or knowing from the polling that such policies will continue to win the broadest public support.

Undoubtedly we are all in favour of secure borders and an ordered migration program. We all think that refugees and asylum seekers should be treated humanely. We all think that Australia should do its fair share in providing durable solutions for some of the world’s millions of refugees. We would expect spirited disagreement on what constitutes a fair share. Even being a nett migration country, we have to restrict refugee numbers so that we can provide places for people migrating for family reasons, other humanitarian reasons, or even business reasons.

Many of us continue to be troubled by the Australian government’s treatment of asylum seekers, especially those who come by boat. We are aware of the fine sentiments expressed by church leaders including Pope Francis. And we find ourselves responding, ‘Yes, but…’ We, like Pope Francis and the church leaders, don’t have to face election at the polling booths next month.

If boats start heading for Australia once again, the Coalition parties will remain committed to the turning back of boats to Indonesia claiming that the turn backs can be safe and legal. The Labor Party has not made any commitment to ceasing those turn backs. It has simply said that a Labor government ‘will seek to ensure they provide access to protection in countries of first asylum and transit countries to deter secondary movements of asylum seekers through the developing of capacity to improve accommodation, work rights, access to health and education services and other living standards for asylum seekers’[1]. But what about those who do engage in secondary movements? What about those still in direct flight from persecution?

The Coalition remains committed to detaining asylum seekers in Australia if they have arrived by boat without a visa. The Labor Party has not made any commitment to cease such detention. The Labor Party has simply said that a Labor government ‘will work to ensure those in detention facilities are treated with dignity and respect and have access to an appropriate standard of care and substantive access to health and education services while held in immigration detention centres.’ No doubt the Coalition parties would claim to do much the same.

I am one advocate who these last six years has sought a compromise. John Menadue, Robert Manne, Tim Costello and I wrote four articles in 2016 and 2017 suggesting that government ‘maintain close intelligence co-operation with Indonesian authorities, and maintain the turn-back policy, while emptying the offshore processing centres and restoring the chance of a future to those we sent to Nauru or Manus Island …. by settling them either in Australia or, if any are willing, in other developed countries’[2]. None of the major political parties adopted the compromise. Neither did the key refugee advocates and their networks. Some of them thought we were being unprincipled and too pragmatic. And just this week, we had some asylum seekers who had been detained for 9 years being released, not for any revised policy reason, but simply to ensure that the issue does not become enlivened at the election. If only they had been released six years ago!

Chances are that this last minute, cynical government move will work. The edge and photo opportunities will be taken off those who want to highlight the inhumanity of the government policy of indefinite detention of asylum seekers arriving by boat. During the election campaign, the government will see no need to defend the policy. Labor will see no need to question the policy. It will be left, once again, to minor parties and Independents to raise the issue. It will be the ongoing task of ordinary citizens to try and convince their fellow citizens that we can do better.

There will be some refugee advocates and many marchers on the weekend who will continue to think the approach of me and my colleagues too pragmatic and insufficiently moral. I respect their views. Their views will never be reflected in government policy because government needs to be democratically elected by people who are adamant that their government maintain the security of their borders and the good order of their migration program.

Rational debate about finding the right balance between securing the house and placing out the welcome mat in a troubled world will always be difficult. Even when the debate cannot be resolved, it is necessary that we take a stand despite our differences, expressing the hope that one day we will find a better way.

We are all weary in this debate. We need to hear afresh the words of Isaiah in today’s first reading:

The Lord has given me

So that I may know how to reply to the wearied,

He provides me with speech.

We are marching and following one who within the week will be nailed to the cross crying out in a loud voice: ‘Father, into your hands I commit my spirit.’

Today as we march, we profess hope in the midst of suffering and death. May we keep alight the flicker of hope that we will find a way to provide the welcome mat to more refugees while maintaining the security of our borders and the coherence of our migration program so that we might be a society living in peace and generating the prosperity necessary to provide more for those in our world who are in greatest need. As we deal with the asylum flows from Afghanistan and now Ukraine, let’s make our voices heard for ‘I tell you, if these were silent, the very stones would cry out.’