The data show no hint of racism in the India flight ban, though the backlash might be a game changer!

There is no statistical justification for a claim that the India flight ban had a racist basis. Instead, it is clear the commonwealth government was reacting to a huge spike in infected arrivals, placing the quarantine system under pressure. But the backlash from the India ban might jolt the government into accepting their responsibility for quarantine.

Various commentators have raised concerns here and here and in mainstream media that the ban may have had a racist basis because Australia did not ban flights from the US and the UK when their Covid pandemic problems were at their peak, but did ban flights from India when it reached its peak.

Unfortunately their conclusion is based on simplistic analysis, a case of ‘damn lies and statistics’ and jumping to ill-founded conclusions.

I have been very critical of the Commonwealth government’s handling of quarantine and the vaccine rollout. But it would be wrong not to point out the fallacy of the racism claim.

The magnitude of the problem

In this article about the shocking Covid-19 infection rates in US arrivals in March 2020 and why flights were not shut down then, we noted that infections were arriving from the US at a rate of up to two or three per plane load. We asked, “how safe were other passengers if 1 in 100 on a plane could pass on infection, and then also bring it into the Australian community?”

On 5 May Greg Hunt highlighted the high number of infected arrivals in recent months. In response to a question about India flights he responded:

“Oh, it’s always about caseload. And I think that’s the important point to understand is what we have seen is, of course, one-in-eight, more than one-in-eight passengers on the most recent flights were testing positive. That’s a level beyond anything that we had seen before.”

Using Greg Hunt’s figure of more than one-in-eight, we estimate that on (some) flights from India, depending on the plane size and passenger load, there could be 13 in 100 infected passengers or 20 to 40 per plane load, much greater than the US rate in March 2020.

It could mean that in a full plane with three-seat configuration, on average there would be a Covid-infected individual in every three rows.

As we write, the published Covid case rate in India is 16,000 per million. Yet the recent arrival rate is equivalent to 130,000 in one million. Does this point to a significant under-estimate of India’s problem? India has the potential to produce many more than other countries, with four times the population of the US and 20 times the UK (and over 50 times Australia’s).

The federal government clearly has a problem in protecting non-infected travellers on those flights, plus the crew, the airport workers, frontline hotel quarantine and health workers, and the Australian public. We cannot have a system whereby people who board planes while healthy arrive infected with Covid and people who are placed into quarantine while healthy catch it.

Restricting flights from the US in early March would have saved hundreds of infections in Australia. We may accept that politics (not to annoy Trump?) was the reason for the federal government’s inaction then. However, we can’t find evidence that ‘race’ was behind the draconian action against India now.

The Australian government has been far from forthcoming with data about Covid, through the Department of Health, Border Force or the ABS. There are numerous complaints from journalists and decision makers about having to work ‘blind’, with little to go on.

In that regard, the government is its own worst enemy. It should be upfront and tell the Australian community what the actual figures are. What are they trying to conceal? By contrast, NZ data is far more readily available and far more comprehensive.

In this article about the problem of infected arrivals, available data indicated that throughout the pandemic, Australia had been taking significant numbers of arrivals from India. “The provisional (ABS) data for June and July 2020 combined show that of the total of 44,050 arrivals from overseas, 24,800 were Australian citizens returning, though it is not known in which country they embarked or spent most of their time. The other 19,250 arrivals were non-citizens, including 1,430 from the UK, 1,810 from China, 1,020 from the USA, 1,850 from India, 580 from Pakistan, 510 the Philippines and 410 Indonesia.”

We don’t have data on citizens returning and from which country. This graph shows non-citizen arrivals over the last 12 months, presumably travelling mainly for business reasons. There is an upward trend for all three countries, and no apparent discrimination against India. 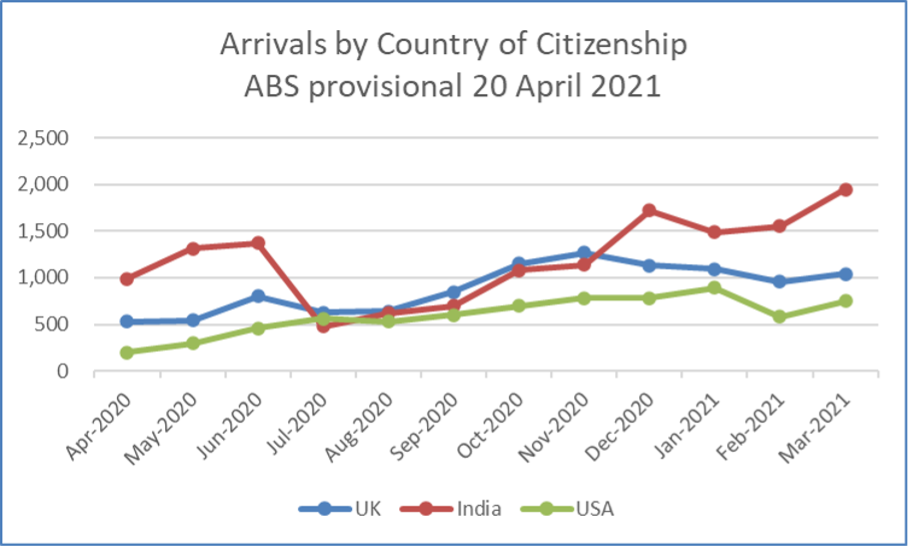 If Australia was selective and did not ban flights from the US and the UK when their Covid pandemic problems were at their peak we should see spikes in total number of infected arrivals at those times.

Data on deaths per million people has been used by some commentators to argue the case for racism. The next graph shows that variable in the three countries, contrasted with the number of infected overseas arrivals in Australia (the shadowed vertical lines, according to the right axis). 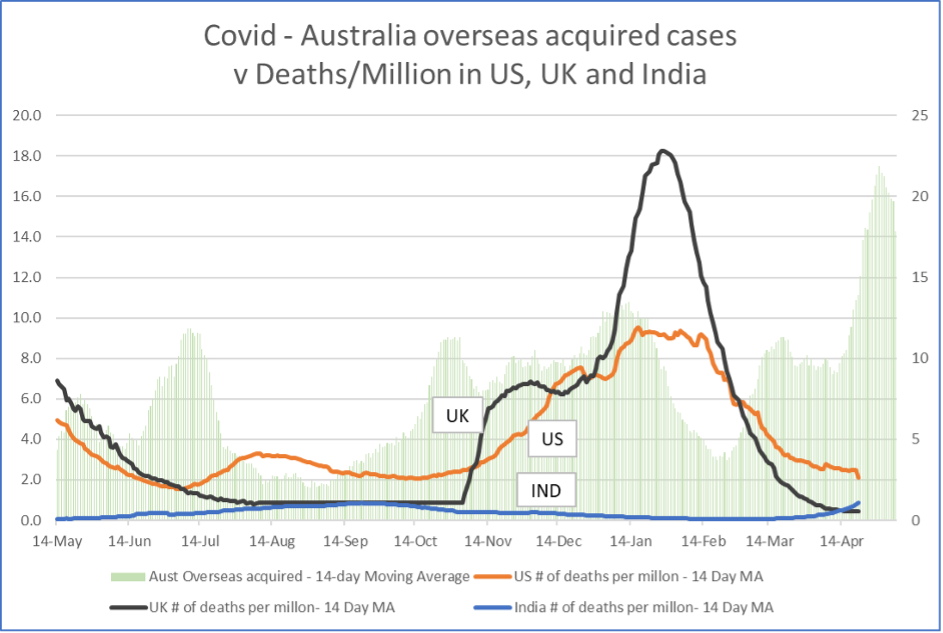 The graph provides little insight: we see that the peak in infected arrivals occurred before the US and UK peaks in deaths. 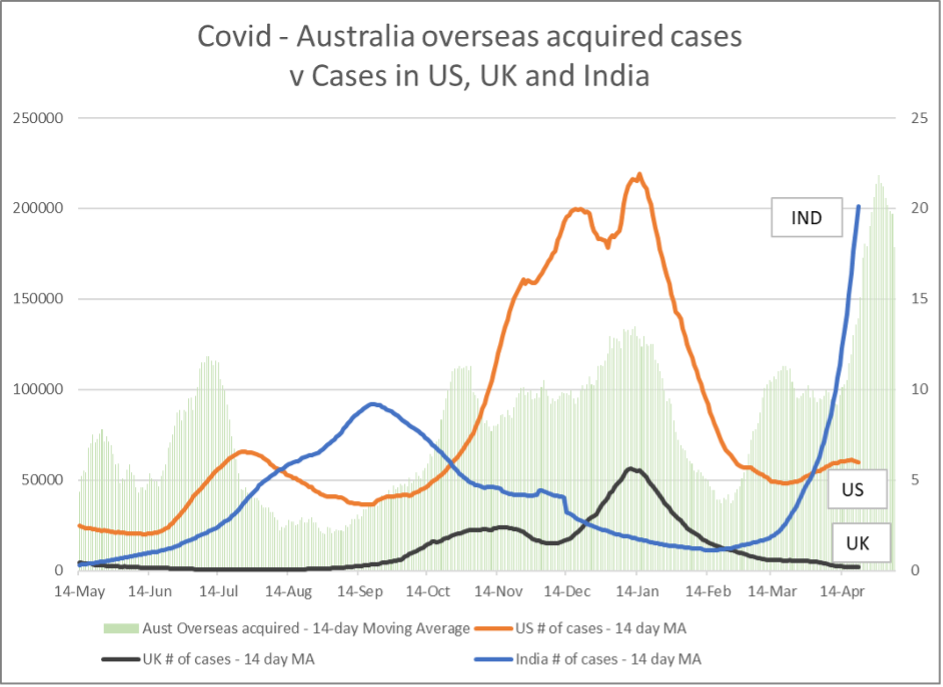 Greg Hunt has access to the statistics on the number of infections arriving in Australia by country of infection and should release them.

We know that state premiers were barely coping with the hotel quarantine system, with capped numbers sometimes being reduced or halted. Perhaps, in mid-April, matters had reached breaking point and something was required to prevent the system from being overwhelmed.

We turn to New Zealand for more insight. They suspended travel from India on the 8 April. Their Ministry of Health data show that on the 6 April, 14 out of the 15 infected arrivals had travelled from India. Other days around that time indicate that Indian infections far outnumbered other sources.

As mentioned, Australian data are not so readily available. But we know Australia had a considerable spike in number of infected arrivals in recent months – from an average of 6 per day in February to 21 per day in April. If Australia had a similar pattern to NZ, we can conclude that this is due to infections arriving from India.

In summary, there is no evidence that the Indian flight ban by Australia was based on race. It was based on infection numbers.

The use of Australia’s Biosecurity Act to stop citizens entering their own country is another argument. In theory it can be applied to people returning from any country.

In NZ there has been little backlash for their decision regarding flights from India.

Australians railed against these privileged, self-entitled, elite sportsmen who – unlike the rest of us -were given special permission to fly off to India to earn millions in a matter of weeks, then expect to be able to return the moment things go awry.

A former elite sportsman summarised the backlash: “It was online that most of the storm blew up though, with Slater frequently portrayed as a louche lightweight who had gone to India in search of money, knowing the risks, only to complain when he gambled . . . and lost.”

Peter Hartcher in The Age wrote that Australia’s complacency, not racism, led to the India ban.

“The truth is that there was no malice in the Morrison government’s handling of the India ban, just ham-fistedness. The ban was the culminating point of other failures by the government – the failure to build a robust national quarantine system with cabin-based accommodation, the failure to set up a local capacity to make mRNA vaccines, the type that can be edited quickly to prevent new variants of COVID.”

We note that Australia and NZ, show little hesitation in restricting arrivals from each other if an outbreak occurs. And we note that the challenger to the Australian government’s ruling has a distinctly western name.

In summary, the claim of Australian racism against India is ill-founded. The accusation is also unfortunate because when the government is branded as racist, all of us are!