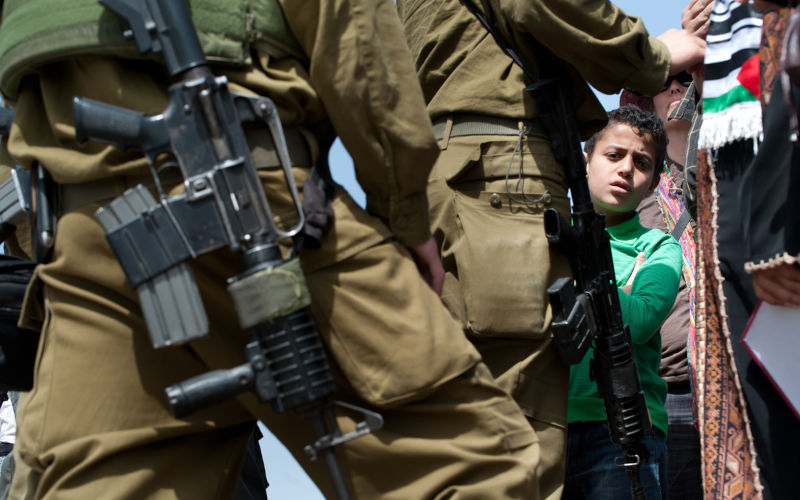 Middle East Eye analyses figures of record Israeli violence in 2022 in which the majority of victims were civilians, including children and journalists.

Israeli forces have killed more Palestinians in the occupied West Bank in 2022 than they have in a single calendar year since the Second Intifada, according to data compiled by Middle East Eye.

At least 220 people have died in Israeli attacks across the occupied territories, including 48 children. Of the total death toll, 167 were from the West Bank and East Jerusalem and 53 were from the Gaza Strip.
An additional five Palestinian citizens of Israel have been killed in the same period.

The renewed Israeli violence comes as the military increases operations in the West Bank and Palestinian armed resistance makes a resurgence.

In at least five cases, settlers were suspected of killing Palestinians while the army is responsible for the overwhelming majority of deaths.

According to UN data, nearly 9,500 Palestinians from the West Bank have been wounded in the same period.

Meanwhile, Palestinians have killed at least 29 Israelis, including one child, the highest death toll since 2008.

The death tolls of 2022 make it the most violent year in the West Bank since 2005, the year many consider the end of the Second Intifada.

Back then, Palestinian armed resistance in the West Bank was stifled under the leadership of the Palestine Authority President Mahmoud Abbas.

However, the PA’s security control of certain areas in the West Bank has been challenged in 2022, with the emergence of two semi-organised armed groups, the Jenin Battalion and the Lions’ Den in Nablus.

The increase in violence by Israeli forces has raised concern among many international and regional states.

Earlier this month, UN experts condemned Israel for the record violence and warned that next year could witness a higher number of casualties.

“Unless Israeli forces abandon this dominant settler mindset and rightfully treat Palestinians in the occupied territory as protected persons, Israel’s deplorable record in the occupied West Bank will likely deteriorate further in 2023,” they said.

According to MEE’s analysis, the majority of Palestinian casualties were likely unarmed at the time of their death.

In at least 95 cases, Palestinians were shot by Israeli soldiers as bystanders during army raids or while participating in anti-occupation demonstrations.

In most cases, the Israeli army made near-identical statements claiming that its forces responded with fire to rocks or explosive devices being hurled at them. It often says “hits were identified” without providing further details.

Nearly 21 fighters were killed during armed clashes with Israeli soldiers. An additional 20 people were killed in such raids but it was unclear whether they had participated in the fire exchanges or if they were unarmed.

Another 22 were killed after alleged car ramming, shooting or stabbing attacks against Israeli civilians and security forces. In some cases, Palestinians have been fatally shot for allegedly “attempting” to carry out such attacks.

The Israeli military, which rarely investigates the killing of Palestinians by its troops, has been criticised by rights groups for its “shoot-to-kill” policy even when Palestinians posed no danger to soldiers.

A recent report by the Israeli rights group Yesh Din found that less than one percent of soldiers accused of harming Palestinians between 2017-2021 were ever charged with crimes.

Investigations are sometimes conducted in high-profile cases and often under international pressure, like in the case of Shireen Abu Akleh. The Israeli army found “no suspicion that a criminal offence was committed” in her case.

The veteran Al Jazeera reporter was one of two journalists who were killed by the Israeli army, the other being 30-year-old Ghufran Harun Warasneh.

Meanwhile, at least 52 teenagers were killed, 31 of them were under the age of 18.

The youngest victim was seven-year-old Rayyan Sulaiman who died from a heart attack after being chased by soldiers. The Israeli army denied responsibility for his death.

Some of the minors killed in the violence include Mahmoud Mohammad Samoudi, 12, who was shot during an Israeli raid on Jenin; Jana Majdi Zakarneh, 15, who was shot twice in the face while playing with her cat on the rooftop of her home; and Zaid Ghonaim, 15, who was reportedly shot while hiding in a parking garage.

At least seven victims were women and girls, including Ghada Sabateen, 47, a mother of six; Fulla Rasmi al-Masalma, 15, who was killed a day before her birthday; and Hanan Khaddour, 18, who was fatally shot while on her way home from school.

At least three people over 60 also died, including iconic peaceful activist Suleiman al-Hathalin, 80, who was run over by an Israeli tow truck and Omar Mohammad Asaad, 80, who died while in Israeli custody.

One of the main drivers of violence in the West Bank is near-nightly search-and-arrest operations conducted by the Israeli army in Palestinian cities and towns, which often turn deadly.

According to UN data, 3,437 such raids were conducted this year. More than 6,500 Palestinians were arrested in that period, including 811 children, the Palestinian Prisoner’s Society said earlier this month.

In March, Israel launched the “Break the Wave” military campaign, focused on crushing armed Palestinian resistance that has seen a revival in the West Bank.

The Israeli death toll in 2022 reached 29 according to MEE’s count, including 17 who were killed in five different shooting and stabbing attacks in cities inside Israel, between March and May, while 12 have since been killed in various attacks in the occupied West Bank. The Shin Bet, Israel’s internal intelligence agency, puts the death toll at 31, according to Israeli media.

The figures include four soldiers and eight settlers. Three of the Israeli soldiers were targeted by armed Palestinians at army posts and checkpoints in Jerusalem, Nablus and Jenin.

The other soldier was killed in a fire exchange during a raid on the Jenin refugee camp.

According to UN data, at least 280 Israelis have been wounded by Palestinians.

Most of Israel’s operations in the West Bank have focused on Jenin and Nablus, home to a growing number of Palestinian fighters.

A combined 90 of the total Palestinian deaths, more than half, came from these two cities alone.

Palestinians accuse the Israeli army of increasingly resorting back to assassinations to eliminate some of the armed groups’ senior fighters, a tactic widely used during the Second Intifada.

In three different incidents, Israeli forces fatally shot a total of nine Palestinian fighters while they were inside their vehicles, in what Palestinians called “field executions”.

Another fighter, who was wanted by Israel, was killed in what appeared to be a targeted explosion in Nablus. Palestinians accused Israel of being behind the attack. The Israeli army did not comment on the explosion.

Alongside an uptick in military operations, Palestinians have faced growing deadly settler violence in 2022, which has been on a year-to-year upward trend since 2016, according to the UN.

There were at least 755 attacks by settlers against Palestinians this year, 161 of them leading to casualties, UN data shows. In comparison, 496 attacks were recorded in 2021 and 358 in 2020.

Violence carried out by settlers includes the use of live fire, physical assaults, arson attacks and the uprooting of olive trees.

In this year’s attacks, settlers are suspected of killing at least five Palestinians, including Ali Hasan Harb, 28, who was stabbed to death while peacefully rebuffing an assault by settlers on private Palestinian land in Salfit.

In addition, a 16-year-old Palestinian boy, Amjad Nashaat Abu Alia, was fatally shot during an attack in which settlers and soldiers were shooting at Palestinian demonstrators.

Of the 755 settler attacks this year, 594 led to damage to properties. According to the Jerusalem-based Land Research Center, 13,130 Palestinian-owned olive trees were damaged.

Nearly 700,000 settlers live in more than 250 settlements and outposts across the West Bank and East Jerusalem in violation of international law.

Huthifa Fayyad Is a writer for the MIDDLE EAST EYE