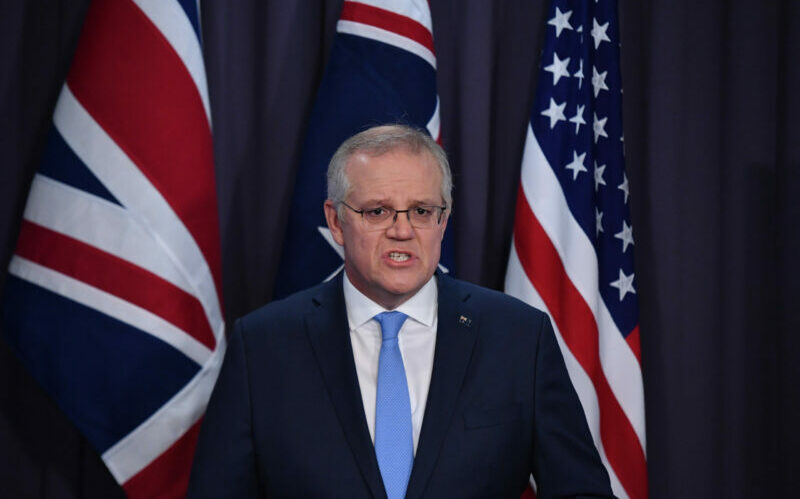 The AUKUS deal will cost us a lot of money, a substantial loss of sovereignty, a lowering of our reputation in the world and the potential to get dragged into a war we should avoid. But we will get our tummy tickled by our great white fathers.

When we went into Vietnam the then prime minister Harold Holt told us we would go all the way with LBJ. The current deputy sheriff seems determined to go ridin’ with old Joe Biden. I’m not sure
whether Boris is another deputy or just the faithful sidekick who appears to provide comic relief in every Western.

The message is clear. We are not part of the Asian region but are tied to a couple of fading countries that speak the same language and share many of the same prejudices. Most countries in our region do not want to take sides in a contest that is not theirs but Australia has taken sides with the losers. New Zealand has not joined us.

The new group is called AUKUS which is pronounced the same way as the Roman god Orcus who dwelt in Hades and was the punisher of broken oaths. No doubt the French will be making offerings to Orcus.

The French will not be the only ones to doubt Australian trustworthiness and their hostility will probably spread to other members of the European community.

Geoff Miller’s article in Pearls and Irritations set out the basics and I will not repeat what he has rightly said but just make a few comments.

When I was a junior diplomat in the 1960s, we were told to consult our great and powerful friends before doing just about anything. The problem is that we live in a very different world where Great Britain is no longer great and relatively speaking the USA is increasingly less powerful. The nation that used to bestride the world like a colossus is rent with domestic dissension but retains the firm conviction that it has divine grace to remain number one in the world.

The not-so-holy defence trinity announced by Biden and his two offsiders is clearly designed to call on the faithful Anglos to bolster the US in its determination to prevent China dimming the American star. Australia will be a useful base and provide some token military assistance as in other US triumphs like Vietnam, Iraq, and Afghanistan.

The basic message used one of the oldest tricks in the political book. You create a threat and tell people that you will save them from it. In this case, we see the resurrection of the insidious Dr Fu Manchu.

This is not to doubt that China under Xi Jin Ping has become more assertive and authoritarian but that does not mean it is out to conquer the world. The issue is not about freedom and ideology but about who gets the gold medal — China or the USA.

The question then is, cui bono? Clearly the USA benefits. The US wants to use Australia as a base for its armed forces and for visits by naval vessels. (A possible sticking point would be visits by nuclear-armed ships.) It already has Pine Gap to provide communication benefits. It also locks Australia into supporting the US in its bid to remain cock of the roost.

The UK at least gets to feel important because it can return to sending gunboats up the river or at least think back to those halcyon days. But what is in it for Australia? We get some technology, eventually some submarines and help in getting long range missiles with which to frighten China.

The price is that we upset our neighbours, lock ourselves into being a satrap and confirm the view the world holds of us that we are a white, Anglo country yearning for days gone by. We eventually get nuclear-powered submarines but so what? Do we seriously think people in Beijing are staying awake at night worrying about a country with a few nuclear-powered submarines that are not armed with nuclear weapons when China has 66 submarines with more being built faster than us?

China already sees us as the monkey to the US organ grinder so this will not tell them anything new. They may impose more trade sanctions on us but this is not certain. The US, for all its talk about having our back, has benefitted from the loss of Australian markets in China by substituting American products so they won’t mind if China applies more trade sanctions.

The only threat to Australian security comes from our alliance with the USA which could drag us into yet another fine mess. Morrison says the new arrangement will give peace and security to the region but doesn’t tell us how.

China says it is back to a cold war mentality and will have a negative effect on peace and security in the region. The usual suspects from both camps will thunder forth with predictable assertions but the Chinese claim that it will lead to an arms race is probably correct.

Presumably the Coalition will try to win a khaki election and the ALP has responded cautiously. Anthony Albanese’s demands about meeting criteria concerning nuclear matters are easily met but show the appearance of independence. The ALP doesn’t want to give the Coalition an opening to attack it in an election campaign.

Like the Coalition, the ALP puts winning elections ahead of sound policy but this makes it difficult to make changes should Labor win the next election.

The submarine deal is of dubious advantage and has been discussed by others in detail. It will lead to at least temporary unemployment in South Australia. We will rely on the US for maintenance and repair if required so this is a further loss of independence.

The rest of the world will see our claims about staying close to other countries in Europe and Asia as what Pooh Bah in the Mikado called “merely corroborative detail, intended to give artistic verisimilitude to an otherwise bald and unconvincing narrative.”

It is tempting to agree with the lady from York who said that Scotty from Marketing couldn’t sell a royal scandal to a Fleet Street tabloid but it remains to be seen how many voters will buy his rhetoric.

People who take an educated interest in politics and policies tend to forget that most people don’t.

In short, this deal will cost us a lot of money, a substantial loss of sovereignty, a lowering of our reputation in the world and the potential to get dragged into a war we should avoid.

But we will get our tummy tickled by our great white fathers.

Cavan Hogue is a former diplomat who has worked in Asia, Europe and the Americas as well as at the UN. He also worked at ANU and Macquarie universities.