The Drum shows continued right-wing bias in its panelist selections

Like many Australians who take an active interest in our country’s politics I have been an avid follower of the ABC’s week-day current affairs program The Drum. I find the other news outlets have a right-wing preference in their reporting and so I have relied on the ABC for a balanced interpretation of each day’s political events.

In general, I would concede the ABC does provide an unbiased coverage as has been confirmed by regular investigations initiated by Coalition Governments.  However, in recent times The Drum astonishingly abandoned an impartial approach to their reporting and disregarded any opinion from our major opposition parties, the Labor Party and the Greens.

The expectation of objective reporting is articulated in the ABC’s Code of Practice which determines that ‘earning and retaining their (the citizens) trust is essential to fulfilling the ABC’s charter and its responsibilities under the ABC Act and to provide innovative and comprehensive services of a high standard to Australian and international audiences.’  By holding to these principles and standards, the ABC seeks to be accountable to the Australian people who fund them.

I have recently become increasingly disgruntled about what I regard as an unashamed right-wing bias in the selection of panellist for the Drum.  Being aware of a potential confirmation bias on my part I sought hard evidence that would forensically examine what I presumed.  To achieve this I went back over past episodes, identified the panellists, investigated their allegiances and assigned them to groups that shared a common feature of their values.

I started this process reaching back to the 4 May and continued until 20 May when I had a period of time away from this task.  On my return I found I could no longer access any program prior to 20 May, which at the time of writing is still the case and so I have a slight gap, about ten episodes in the data.   I resumed the sampling on 1 June and continued until 14 July.  I searched 36 episodes and identified 144 panelists.

I allocated each to a group based on what I thought was their primary function.  Of course, many could have been allocated to more that one group, such as Kate Carnell, a Liberal and an industry spokesperson.  I chose the former as what reflected her values.  In any case, I could have designated her as a business representative but this would have made no difference to the evidence of bias.

The graph below illustrates the distribution: 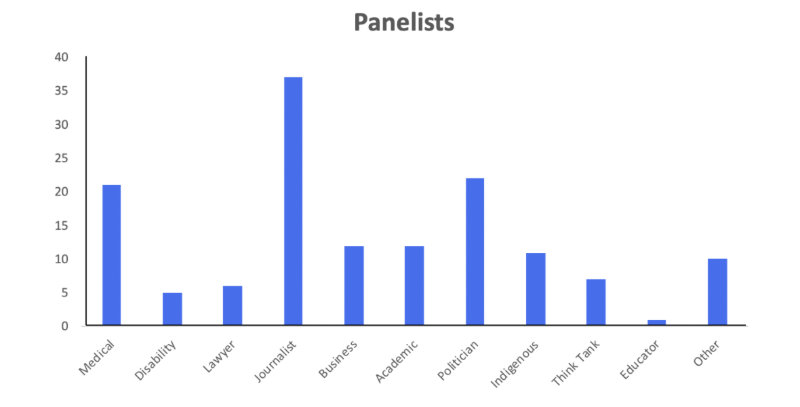 I appreciate the number of journalists and politicians in the population, it is a current affairs production and the number of medical experts reflects the influence of the COVID pandemic.  However, a closer examination discloses an indefensible bias towards, first the Liberal Party and then the Coalition.  The 22 political panellists are:

When these numbers are assigned to the dominant parties in our governments the distribution is as follows: 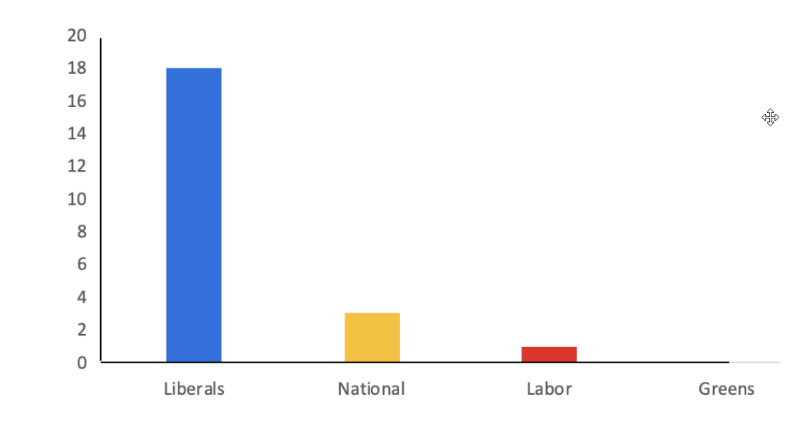 The one politician I assigned to the Labor party is Emma Husar who left the party after on-going issues between herself and the party and to think she in any way was there to present a Labor assessment of any issues is not credible.   The real situation is there is no representation of the Labor Party or Greens on this show!  The result is that every political opinion advanced by a political guest came from the Coalition, predominantly the Liberal Party.

There are panellist who are regulars on the Drum, these include Kerry Chikarovski, Kate Carnell, Stephen O’Doherty and Adrian Piccoli.  These are powerful representatives of the Liberal Party and to watch them apologise for the Government’s blunders takes away any credibility the show seeks to embody.  These special guests are portrayed as ‘friends’ of the Drum and the regular hosts treat them as such.

There is another bias that is perhaps more blatant then the political classification and is the distribution of those panellists representing business groups and trade unions.  There were twelve panellists I identified as representing business and no one from the Unions.  I suspect that the seven I assigned to the Think Tanks also represented business.  This is hardly fair and unbiased representation on this show.

I contacted the ABC complaints department on Thursday, 8 July and they have assured me they have passed this on for examination.  I informed them I would wait until Monday before I went public with my findings.  To my dismay they had the Liberal John Pesutto on the Friday and Adrian Piccoli from the Nationals on the Monday.  Pesutto’s appearance meant that there were seven Liberals in the last ten episodes and Piccoli made that eight consecutive representations of coalition affiliates.  This is hardly a concession about my concerns.

The principles that the ABC operate on, according to their Code of Conduct includes Item 4

Aiming to equip audiences to make up their own minds is consistent with the public service character of the ABC. A democratic society depends on diverse sources of reliable information and contending opinions. A broadcaster operating under statute with public funds is legitimately expected to contribute in ways that may differ from commercial media, which are free to be partial to private interests.

There is no evidence The Drum meets this principle.  The sad thing is the producers, presenters and staff of the show are unaware of their inbuilt bias and find my assertions offensive.  However, through their actions they contribute directly to the creation of a significant number of politically disillusioned citizens who see no fairness in the media.  When the ABC replicates the very values of our blatant private, right-wing media it produces the very social conditions that allowed Trump to emerge in the United States.  A disenchanted educated, middle class, those ‘latte sipping yuppies’ the Nationals love to mock along with a far-right popular media that unashamedly opposes any social fairness provide a very dangerous cocktail that challenges democracy.

The continual scandals surrounding the current Government and the lack of being held accountable indicates just how far we have come along that road.   For our democracy to survive we need fair and fearless reporting from our ABC not the right-wing defender the Drum has become! 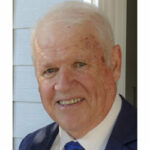