The drums of war that are heard so loudly in Canberra beat rather more softly in Asia. 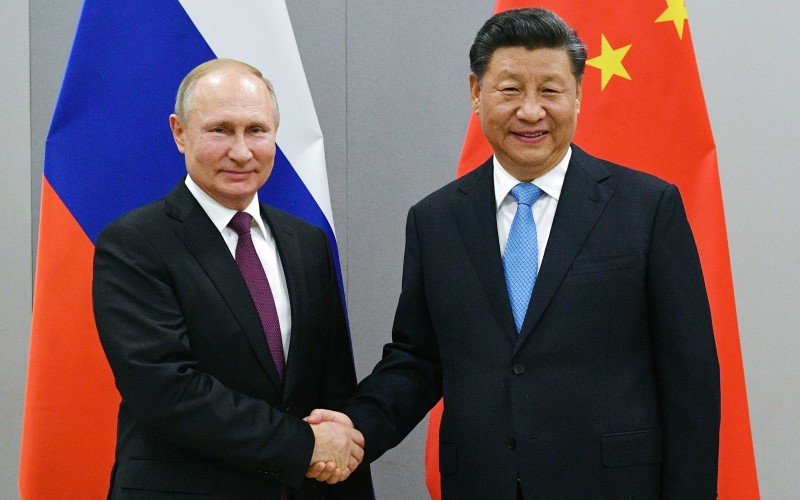 Australian media on Xi and Putin

Greg Sheridan in The Australian said it was now official: “[…] the two great nationalist dictatorships of the 21st century see themselves embarked on a new cold war with the US and its allies.”With Russia backing China on Taiwan and China supporting Russia on NATO, the two countries had crossed a tremendous line in the sand. “Xi Jinping and Vladimir Putin know they are in a cold war with the west,” he said, “and they are pursuing it ruthlessly.”Peter Hartcher, of The Age/Sydney Morning Herald branded Beijing’s Olympics as the genocide games, saying the label was a protest again the Chinese government’s repression of the Uighur people in Xinjiang province. He took aim at Beijing’s stunt of having a Uighur athlete help light the Olympic cauldron.He quoted Rory Medcalf, head of the ANU’s National Security College, as saying there was now a full-throated struggle over the future of the world order. Hartcher said if Beijing and Moscow continued to tighten their embrace, history might judge the statement as a step towards a vision as important as the 1940 Tripartite Pact between Germany, Italy and Japan.The tone of Sheridan and Hartcher matches that of an editorial in The Washington Post. The heading read: “Russia and China announce a bid to make the world safe for dictatorship.”

Asian media commentaries on China and Russia are well-considered and less intense. And they offer differing views – some critical of China; others hitting at the US.The sternest commentary is an editorial in The Straits Times of Singapore. “It is clear that a quasi-alliance between Beijing and Moscow is taking shape,” the paper says. “It is one that will impact and have consequences globally … The US and like-minded partners in both Europe and Asia have plenty to think about.”The Asahi Shimbun in Japan is critical of China. It says in an editorial that a strong case can be made for confronting China over human rights problems. The choice of a Uighur athlete to carry the Olympic torch was a blatant piece of theatre that did nothing to clarify allegations of serious human rights abuses.“China has adopted the slogan of ‘Together for a Shared Future’ for the Winter Games,” it says. “But the future will be bleak if the value of human rights and freedom is not shared widely.”The big difference between these two newspapers and the Australian columnists is the language. They make similar points but their language is less strident, more measured. If language reflects thought processes, their assessment is more measured.

US comes in for criticism

Hong Kong’s South China Morning Post, however, criticises the US. The heading of its editorial sums up its view succinctly: “Greater China-Russia co-operation the result of divisive US strategy”.Xi and Putin, the editorial says, have markedly improved relations over 38 meetings in their time as leaders. Chinese sovereignty is threatened by America’s close ties with Taiwan and by the presence of US Navy ships in the South China Sea and NATO is extending its presence in Eastern Europe. “Territory is perceived as being at risk,” it says.“The unprecedented breadth of the agreement in Beijing proves how close China and Russia have become, in large part due to the actions of the US and its allies. Washington’s strategy is creating global instability and uncertainty.”SCMP adds a balancing factor, through a column by veteran Asia observer Thomas Plate. He is a journalist-turned-academic, now with Loyal Marymount University in Los Angeles. Plate says the Chinese tilt towards Russia is understandable but he notes that nothing said in public suggests Xi would be happy with Putin giving the green light to the Russian troops on the border with Ukraine.Trying to outflank the US by joining up with Putin is very risky, he says. “However popular the former KGB officer might be inside Russia, his image in the rest of the world is mixed, at best,” Plate says.“With so many mouths to feed, citizens to house, medical care to provide and so on, a determined détente [with the US] rather than ‘wolf warrior’ gamesmanship might better serve Beijing’s interests.”The Times of India also gives the US a hard time, through a commentary by  SD Pradhan, a former chairman of India’s Joint Intelligence Committee. His piece is largely descriptive – a rundown of the Xi-Putin joint statement – but it turns analytical towards the end  and criticises America.“The US accusations and responses from Russia have become shriller and louder,” he says. “The US and its allies need to pay attention to the serious implications of pushing Russia to the wall. This is resulting in Russia moving closer to China despite their different interests in Central Asia.”

The drums of war

Sometimes what is not said is important. Bangkok Post, The Jakarta Post, The Japan Times and the Korea Herald treated the Xi-Putin news as routine, running straight reports from agencies such as Reuters, AFP and Bloomberg.The Straits Times published a well-informed and thoughtful piece looking at the two flashpoints, Ukraine and Taiwan. The commentary, by Bilahari Kausikan, chairman of the Middle East Institute at the National University of Singapore, says Beijing must understand that Ukraine and Taiwan are not symmetrical: Taiwan is vastly more important to the US and the world economy than Ukraine.If Russian invades Ukraine, no one expects the US to respond with force, he says. But it is highly improbable the US would not respond robustly to a Chinese attack on Taiwan. “It would be political suicide for any American president to stand idly by,” he says. “China will never forswear the use of force to ‘reunify’ Taiwan.“I do not say war will never occur. But whatever happens in Ukraine, unless Taiwan goes crazy and declares independence, war over Taiwan is not imminent.”The drums of war that are heard so loudly in Canberra beat rather more softly in Asia.