The Failure of the American War Machine 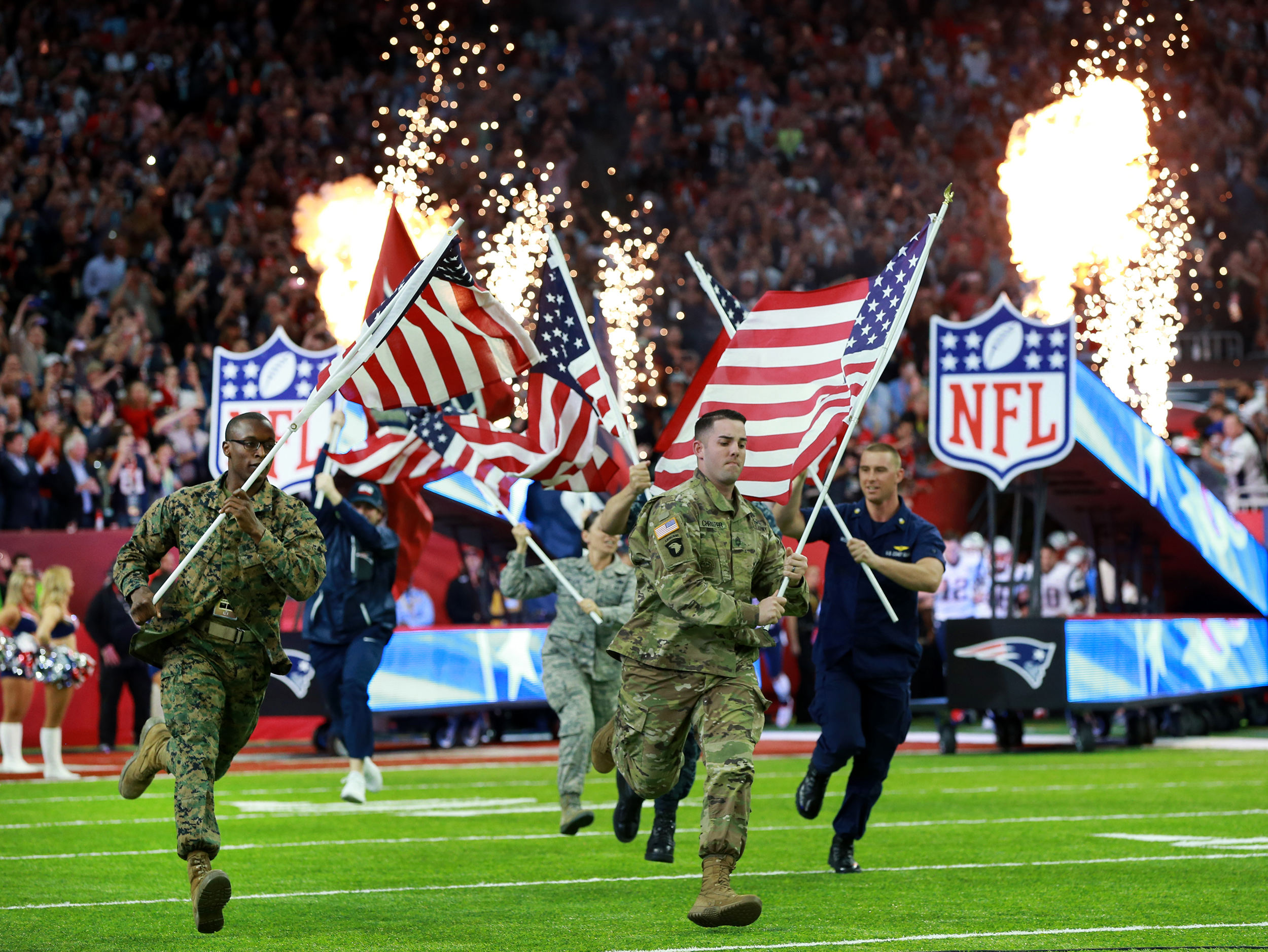 HOUSTON - FEBRUARY 5: Military members run out with American flags before the game The Atlanta Falcons play the New England Patriots in Super Bowl LI at NRG Stadium in Houston on Feb. 5, 2017. (Photo by Jim Davis/The Boston Globe via Getty Images)

The American War Machine (AWM) is big and brassy. Sound and light, chest-thumping, shock and awe. It is an extension of the American psyche.

Big, fast, expensive items of metal. Lots of noisy guns, big bombs to ‘lay waste’,  the nasties, the goons, the gooks, slope heads, rag heads, kooni’s, rumjad’s and whatever other racist and dehumanising name that is deployed to describe American military enemies.

The AWM is stuck in the 1960s. It has not moved on from the heavy metal of Detroit. It has to be seen, it has to be admired, it has to inspire respect and fear. It is gunboat diplomacy in overdrive. Pompously sailing around the South China Sea, acres of grey paint. Planes take off from miles and miles of decks. Vroom, vroom, Top Gun.

Americans join the AWM to kill people and mostly they are not disappointed. They kill people overseas rather than in American high schools or shopping malls.

Preparing for war and conducting war is part of the American way of life. Since it became a nation in 1776 America has been at war for 222 of the 245 years. It has been at peace for 21 years. Since 1945 it has fought five major wars, Korea, Vietnam, the Gulf War, Iraq and Afghanistan, only the Gulf War can be regarded in any way as a success.

Noting America’s penchant for war, American businessmen created the Military/Industrial Complex. WWII made many millionaires. Once created it had to be fed. Vietnam was very profitable for the Complex as was Iraq and most recently Afghanistan. The Complex has no interest in peace. It is stoking the rivalry between the US and China. US Congressmen and Senators are beneficiaries of largesse from the Complex which reaches into Europe, the UK, Israel, Saudi Arabi, the Gulf States, Canada and Australia. It has as much influence over the US government as the East India Company had over the British government.

It is insidious. It provides substantial financial support to the Australian Strategic Policy Institute (ASPI) to act as an echo chamber for views it wants to be pushed with respect to China. The Morrison government favours ASPI advice over that of its own defence and foreign affairs departments. It would, wouldn’t it.

The United States has an unerring ability to misread the rest of the world, particularly states it feels are inferior and they amount to a lot. American exceptionalism is as lethal as Covid 19. The US saw Vietnam as a backward state whose ‘problems’ could be solved with a bigger payload of American bombs, dropped without any interest in accuracy, on Europe by the allies in WWII. Kissinger advised Nixon to go back to the Paris peace talks when twelve B 52 bombers were shot down over Hanoi in a week in December 1972. Millions of Vietnamese were killed, including with Napalm; Agent Orange still kills and maims Vietnamese children. Despite the deployment of 500,000 troops, America lost the war to a far more determined and skilled army which possessed little of the whiz-bang technology available to the US.

America came out of the war humiliated, its prestige in tatters. Like Morrison and Berejiklian with respect to Covid, it learnt nothing from its ill-judged venture into Asia. After a while, a short while, its self-confidence was restored by an array of new products from the Complex. Like the court jester, the Complex whispered in the ear of Washington that Vietnam was an aberration and that the US was really a very powerful country, particularly with all the new gear available to it.

So, it had a bit of a go in the Gulf. That seemed to work so it had a bigger go in Iraq and that did not work; it created a mess in the Middle East and enhanced the prestige and power of Iran and allowed Israel to get further away from US control.

Faced with this developing mess, the US decided to follow up an earlier mission into Afghanistan and reshape the country in its own image to provide a haven for US power in Central Asia and the Middle East. The problem for the US was that Afghanistan exists as a country only in the minds of other countries and the media. To the people that live there, it is a post-colonial mish-mash. The Pathan tribal grouping is arbitrarily divided by a British decision to draw a line through the tribal area. It is known as the Durand Line and was ratified in 1919. The presence of a large number of Pathans in Pakistan with family and commercial ties on the other side of the border gives Pakistan a great deal of leverage in the affairs of Afghanistan.

There are three other main tribal groupings. The Hazaras and Uzbeks make up about 9% each and the Tajiks 25% of the population. The Pathans are 50% of the population and the dominant tribe, they are Sunni and comprise the majority of the Taliban. They oppress the other tribal groups, particularly the Hazaras who are Shia. Kabul is and will remain a city-state, divorced from much of what goes on in the rest of the country.

The Americans have had to scramble out of Kabul in the last few days in scenes reminiscent of their exit from Saigon. They lost the war for the same reason they lost in Vietnam. Hubris, an over-reliance on technology, a failure of intelligence, US and Afghan troops not committed to the undertaking and enemy troops who were, plus topography, loss of US public support and war-weariness. Additionally, the Taliban were receiving increasing support from Pakistan and financial support from Saudi Arabia and China.

Based on what happened when the Russians announced their intention to withdraw, I did not believe the Afghan army would fight for long and that is what has happened. They never had much to fight for.

American prestige has and will suffer but not for long. The Complex is moving on. Boosting the confidence of US and allied politicians with talk of the inherent inferiority and weakness of the Chinese system of government and the superiority of western democracies in meeting future challenges, a claim that is not immediately apparent when the responses to Covid 19 and Climate Change are factored in.

China is the bright new target in the sights of the Complex. It is a much bigger prize than Iraq and Afghanistan. The Complex is not noted for its social conscience or considerations of long-term consequences. Climate Change does not figure in its plans for a profitable future. It is here and now.

Of course, Australia should never have followed the US into Vietnam, Iraq or Afghanistan. It has cost us dearly in lives lost and hearts and minds damaged as well as money that might have been spent on the greater social good. Australia should certainly not follow the US in China-bashing. We are the yapping dog on the US lead. Take the leadoff and we will run a mile. We have a lot more to lose than the US should ever we find ourselves arranged against an openly hostile China on the side of the US. Our yap dog follies have already cost us over $50 billion in trade with China. There has been no loss to the US, which in fact actively sought and picked up 40% or over $20 billion of that lost trade.

Afghanistan should demonstrate the Australian need for an independent foreign and defence policy but with ASPI leading the LNP by the nose and it, in turn, being cajoled by the Complex it is hard to see how reason will prevail.