‘Freedom’ marches and far-right groups in the US and Australia.

Dissatisfaction with governments and authority has been widespread for months. The restriction of rights around Covid is seen by some, not as a community responsibility in the face of a pandemic, but a sinister plan for governments to further control citizens.

One of the most troubling comments to emerge from the recent so-called Freedom Marches of 24 July was that of one of the organisers, Anthony Khallouf, founder of Australians v. The Agenda, who declared that “he had no regrets if anyone caught Covid-19” as a result of the marches. The following day it was announced that a woman in her thirties had died from Covid, bringing the number of deaths in the current New South Wales outbreak to eight.

Did this callous and homicidal comment truly epitomise the spirit of these rallies? The ‘demonstrations’, if they could be labelled such, had been bubbling away on social media screens of the disaffected for years but it was a shock to see them spill over so publicly onto our streets. We need to ask ourselves what were the factors motivating these marches? The causes may be several and not always clear-cut. Of course, the general response to these marches was one of condemnation — loud and widespread. But is condemnation enough?

Australian v. The Agenda was only one of the ragbag collection of seemingly disparate groups; a mixture, it appeared at first sight, of disaffected extreme right groups, that collected at these rallies. Ostensibly these marches were in opposition to the restrictions arising from Covid-19 lockdowns but there may be other agendas at play. The usual suspects certainly were represented – anti-vaccine activists, conspiracy theorists who do not believe that the coronavirus is real, extreme libertarians who are opposed to any public health policies, hardened far-right groups like QAnon, Members of the Proud Boys and anti-Semites.

But it may be premature to assume that all these people are right-wingers. Many appear to be vulnerable people just like us, small business owners too, terrified of what lockdowns will do to their businesses, parents worried about their children’s futures. Their fear is being highjacked and manipulated by unscrupulous groups such as Australians v. The Agenda whose agenda is certainly broader. Before the rallies, Khallouf posted on social media: “We need to stop the spread of communism. If you’re not out at your capital city protest this Saturday, you may as well kiss Australia goodbye.” Far-right groups, who interpret improved rights for marginalised groups and women as an attack on white male identity, have been growing and emboldened by the attack on the US Capitol earlier this year.

The upheaval, resulting from the way Covid-19 has now fractured society, may now have been the catalyst for their expansion and provided the opportunity for this single banner, under which these groups may now organise. There is certainly the whiff of opportunism and manipulation now being wielded by these groups. Previously disparate and disconnected, the current climate also allows them to carry along in their wake the many disaffected, but previously uncommitted or disorganised, who are angry at society but not always able to analyse or articulate the reasons.

Dissatisfaction with governments and authority has been widespread for months. The restriction of rights around Covid is seen by some, not as a community responsibility in the face of a pandemic, but a sinister plan for governments to further control citizens.

Several rally organisers may be building their own power bases at this time of teetering democracy. Apart from Anthony Khallouf who describes himself as a “guerrilla journalist”, dedicated to exposing “the corruption within Australia” another march promoter was former Liberal Party Member John Ruddick, now Liberal Democrat candidate, who, when presented with his fine for attending the march, was delighted, and planned to “frame the fine and hang it on his wall.” Anti-government rallies may be fine fodder to build political careers.

As early as 2016, Professor Geoff Dean from the Griffith Criminology Institute warned that when right-wing groups “capitalise on the politics of manipulating public fear with their contemporary anti-Islam and anti-immigration rhetoric designed to cloak their new far-right extremism persona in the language of concerned citizens and not racist ideologues, then community fragmentation becomes a real issue.” What we are now witnessing is indeed the wholesale manipulation of public fear under the guise of concerned citizenry – wolves in sheep’s clothing – and sadly community fragmentation.

It’s easy to feel some sympathy for individuals sucked up by the rallying cries of right-wing groups. Out there in the real world, there’s a lot of fear, dissatisfaction, and general instability. Good leadership has been lacking and gaps in public health care have become obvious. The cracks in many areas of the social order have been embarrassingly revealed in this pandemic. There’s much to repair by people of goodwill. But the racist agendas of right-wing groups need to be exposed, for what they truly are, hiding as they do under the false banner of the public good. Beware those wolves. 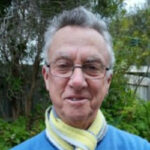 John Bartlett is the author of three novels and three poetry collections. A Tiny and Brilliant Light is a collection of all his published non-fiction. He was the winner of the 2020 Ada Cambridge Poetry Prize.