The khaki election this ANZAC Day 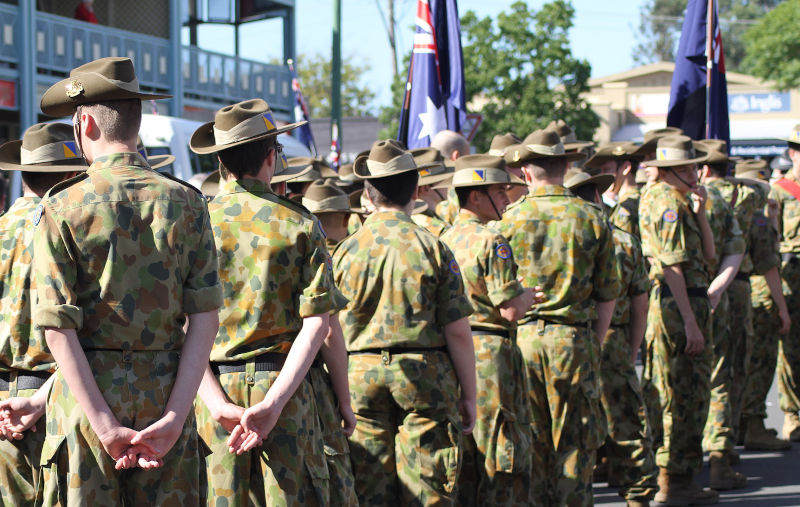 The irony of the current 'khaki election’ is that its great political chattering points are all about navy, not army kit. Image: Wikimedia Commons

The khaki does not primarily represent the defence of Australia. It still represents something close to what Lord Salisbury intended it would be in the first khaki election of 1900:  the defence of the empire.

Khaki elections are those influenced by wartime or post-war sentiment. This year, we may say ours is influenced by vicarious, warmongering. Backed by the U.S. alliance, the present campaign includes an official beat up of the China threat to return a government touting spurious defence policies.

Helpfully, however, this assessment raises issues about the uneasy relationship Anzac Day has with Australian national sovereignty.

A key one is suggested by the imperial derivation of the term ‘khaki’. Originally, a Persian word, meaning ‘the colour of dust’, it was the colour of the uniforms into which the British army in India and elsewhere changed from its old ‘red coats’ from the 1880s.

Around August 1900, the term ‘khaki election’ appeared in the Australian press. This was in references to the first one: the up-coming British general election when, as anticipated, Lord Salisbury successfully made the Second Boer War a major issue in his ‘imperial’ electioneering of 26 September- 24 October. The fact that the British army had not long changed into khaki was also in the air.

That change should not block out the birth of ANZAC. Lest we forget, indeed, that ‘red coats’ and Australasian colonists fighting for the extension of empire had already birthed the tradition in the Maori Wars (1840s and 1860s). In this context, we properly remember the imperial as distinct from the sovereign national nature of the AIF when, later in 1915, it fought with the NZ Expeditionary Force at Gallipoli.

As those forces developed the ANZAC tradition in the lee of British India and Egypt, they wore the khaki too. Hence the prestige they enjoyed back home as ‘returned men’, who had supported the British army and empire in the Middle East, and France in the two world wars. And that was, of course, as their campaigning had embodied official as well as popular hope that reciprocal British empire protection would save white Australia from the ‘Asian invasion’.

Facing that putative prospect in 1942-1975, the army changed into ‘jungle greens’. Since the Japanese were aggressors, we had to fight them in the tropical rain forests of New Guinea. But later, the army continued to wear green to encourage and support neo-colonial British and American agendas against national independence movements, often with communist leaders, but none that posed a real threat to Australia in jungles of Southeast Asia.

At the same time, Australian culture tended to disguise that anomaly by returning to the older colour of ANZAC. Think of the popularity of George Johnston’s 1964 novel My Brother Jack. The image on the cover, which was coloured a heavy brownish khaki, represented the story well. It contained the figure of a light horseman from Sidney Nolan’s Gallipoli series wearing a plumed slouch hat.

And again, for almost all of us now, the dappled, yellowish-greyish-brownish camouflage outfits worn by our outsized ANZAC heroes in Afghanistan – which is not far from India – rekindle the khaki.

The Afghanistan war crimes issue may have temporarily unsettled the feeling. For the high-risk defamation proceedings former Corporal Ben Roberts-Smith VC has launched in the Federal Court against parties alleging his participation in war crimes, proceeds in the press like a surrogate war crimes trial against him.

Questions cross our minds, as we wonder what an ANZAC hero might be, and the press reporting rightly assumes we love the thrill of distant horror.

Super-gross shots taken in the SAS soldiers’ club have gone viral. In some I’ve seen with Roberts-Smith in the frame, he smiles on, as his mates, not him, are holding or drinking beer from a prosthetic leg. These bizarre images have also been circulating in the Asian press, Singaporean, Vietnamese, and southern Chinese – accompanied by local surprise at Australians tearing down their heroes.

The personal reputation of Roberts-Smith may already be badly compromised. But still, Australian war crimes in earlier wars have made little dent on popular enthusiasm for ANZAC.

Breaker Morant, who was executed by the British in 1902 for murdering German missionaries in the Boer War, is still the subject of calls for a government inquiry into what happened – to him, not the missionaries.

No one was punished for our atrocities in World War One. Even more, the foundation narrative of the Australian War Memorial (AWM), Charles Bean’s Official History, indulged the Australian soldiers who bayoneted some German prisoners in 1917 (see my P&I 28 August 2018).

Most egregious of all, perhaps, was the massacre of at least scores of Japanese survivors of the Battle of the Bismarck Sea (2-4 March 1943). And if anything, this atrocity, which went on for some days, was applauded. As the guns of an RAAF aircraft ripped into one of the ‘lifeboats’, Damian Parer happened to film its murderous fire from the cockpit. Later, to boost war morale, the Cine Sound Newsreel he made of that fragment of the atrocity did the rounds of Australian picture theatres.

Today, the picture we get from the ‘khaki’ shower of more polished BRS photos that have come out in the culture, hardly even hints at blood. A slight exception would be the ones where he is shown armed and wearing camouflage gear and sunnies on dusty desert operations – in a country with mountains and mud compounds. In many, including some with the Queen, we catch the VC pinned onto his olive drab khaki service dress (which changed in 2016 back to the darker, traditional brownish khaki of the imperial force era).

In more relaxed shots, shirt off, showing his tats, he is jogging or pumping iron in the gym.

Former AWM Director Dr Brendon Nelson, who has recently returned to the AWM Council from the Board of the arms company Boeing, provided outspoken support for the hero when the press alleged his murderous behaviour in 2018. Billionaire businessman Mr Kerry Stokes, who collects VC’s, and who has only just retired from the Council, has provided essential legal funding for the defamation proceedings.

And in such a political-cultural context the BRS brand was never going to inhibit the current government’s calculations that, by touting its attention to defence of the sovereign nation, it would bring home the bacon in a ‘khaki election’.

And not in a ‘blue’ one, representing the navy or air force. For the simple reason that the foot soldier and thus the army rather than of the other services has been central to the conduct our imperial campaigns. Or similarly, since the shift in 1942 to seek protection from American hegemon, central to what has become our expeditionary reflex in the Anglosphere .

Thus, an irony of the current ‘khaki election’ is that its great political chattering points are all about navy, not army kit. This is because of what, in considerable measure, is the US backed re-inflation of our irrational old fears of a Chinese military threat in the Pacific. Despite recent news of serial procurement fiascos relating to the frigates and various aircraft, the government is talking up the apparent Australia, U.K., U.S., AUKUS, nuclear submarine deal.

We don’t know what submarines we might be getting, U.K or U.S., where they will be built, here or there, and if here, where? No industrial infrastructure to support the nuclear venture here seems to be seriously discernible; and, in the best case, the nuclear fleet will not be available to protect us for at least 20 years!

Politically, though, that doesn’t matter; there is virtually no threat. And the thing is that A is for Australia, for ANZAC, the military wing of white Australia; it is for Afghanistan and for ASPI, for white America and the Anglosphere; and, as government defence policy retires behind that veil of whiteness, A is for AUKUS.

BRS’ ‘khaki’ image portfolio layers many others in the culture, as it looms large to cover the central inadequacy of Australian defence culture today. In confirming the idea of Australian fighting prowess, with which ANZAC culture desires strongly to identify, the khaki does not primarily represent the defence of Australia. It still represents something close to what Lord Salisbury intended it would in the first khaki election of 1900:  the defence of the empire.

That is a great, collective secret of Australian defence. The current khaki election is riding a political-cultural illusion of our permanent place in the British empire-cum-Anglosphere.