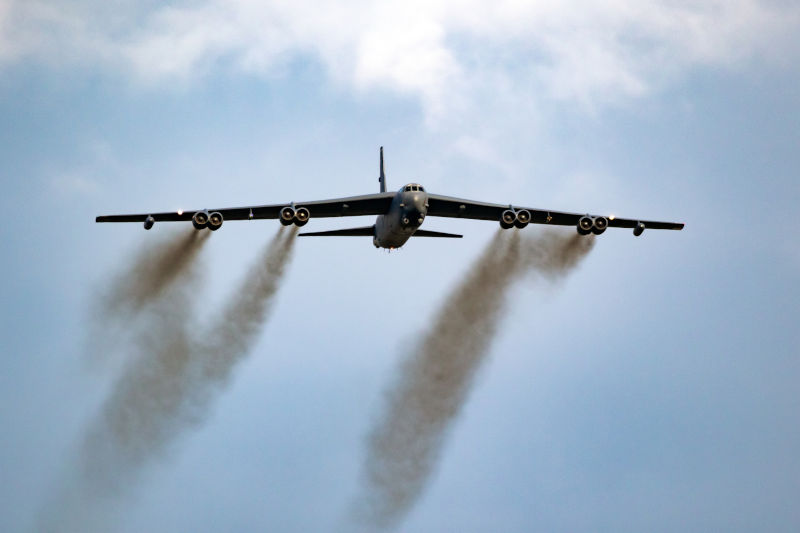 Another call to arms has been issued by Washington. The venue that features the recipient of such lethal generosity is not new.

Australia, in its steps towards increased garrisoning and militarisation by the US war machine, will be hosting six nuclear-capable B52H Stratofortress bombers in the Northern Territory at RAAF Base Tindal. The revelation comes after this year’s hosting by RAAF Base Amberley of six US B-2 Spirit bombers for training purposes.

According to a Four Corners report, the US has developed plans for a “squadron operations facility” to be used during the NT dry season, an adjoining maintenance centre and a parking area for the six aircraft. The target is unmistakable, with Becca Wasser from the Centre of the New American Security making the obvious point that stationing such bombers in the north will send “a signal to China that any of its actions over Taiwan could also expand further.”

The US Air Force is also blunt on the deployment. “The ability to deploy US Air Force bombers to Australia sends a strong message to adversaries about our ability to project lethal air power.” As anti-nuclear activist and the Nautilus Institute’s Richard Tanter observed, that message regrettably showed “to the Chinese that we are willing to be the tip of the spear.”

The Australian government, namely, the Department of Defence, is proving customarily mum on the issue. As with AUKUS and the general military alliance with Washington, at best a cockeyed, unbalanced affair, at worst a provocation for war, Australian citizens are told to put up and shut up.

US sources, in contrast to their Australian counterparts, have been more than forthcoming about their next imperial pursuit in Australia’s northern reaches. With customary garrulousness, the US Air Force revealed to the ABC that, “The RAAF’s ability to host USAF bombers, as well as train alongside them, demonstrates how integrated our two air forces.” That’s sovereignty for you.

Reporting by the Stars and Stripes magazine last month, which stole some thunder from the Four Corners expose, was packed with detail about ongoing major construction in the northern port of Darwin “at Larrakeyah Defence Precinct and at Royal Australian Airforce Bases Darwin and Tindal for facilities that will be used by the US Air Force, Navy and Marine Corps.”

These facilities are intended to “support US and Australian forces training to defend chains of small islands that would likely be an arena for any future conflict with China”. Ross Babbage, former Australian assistant defence secretary, is credited as a source for that view. In an interview with Stripes, Babbage explained that Canberra and Washington were learning how best to conduct dispersed operations and deploy anti-ship missiles in the Western Pacific “to make it extremely difficult and dangerous for Chinese operations in a crisis”. Every now and then, even Australian officials can be drawn out.

For anyone keen to spot the increasingly growing US footprint in the Australian north, one need go no further than the work of Florida-based fuel provider Crowley, operating under a contract with the Defence Logistics Agency-Energy. Again, one is grateful for New World frankness.

According to the company website, a “bulk fuel storage facility for defence and government supply in Darwin” is being constructed. The company was awarded the contract to provide “fuel management and storage services” that would include “receiving, storing, protecting and shipping aviation-grade JP-5 turbine fuel and commercial-grade Jet A-1 fuel for defence forces.” In layman’s terms, the project will enable the US to conduct defence operations in the region using military-grade fuel.

The storage facility envisages the construction of 11 storage tanks that will be operational by September next year and should be able to store up to 2 million barrels (80 million gallons) “of product”. The Australian contribution to the whole US$181 million project comes from Saunders International Ltd, which “provides engineering, procurement, construction and management (EPCM) services, as well as construction of the bulk fuel storage tanks.”

The Australian Defence Department has supplied some detail about improvements via the Larrakeyah Barracks Redevelopment (LBR) Project and the Facilities to Support Naval Operations in the North (FSNON) Project. Authored in a dead language designed to arrest rather than spike suspicion, the information is designed to “provide information to members of the public about the LBR and FSNON projects”. But any resident in the Northern Territory can only be alarmed about such increasingly packed military efforts.

The Australian DoD puts the bill for the upgrade of the Larrakeyah Defence Precinct facilities, and the “construction of a new wharf and fuel farm to support naval operations in the North” at a hefty $472 million. No mention is made of the increased presence of US military personnel, though the implications are clear enough.

FSNON, for instance, will supposedly “address significant shortcoming in existing operational support facilities at the commercial Darwin Port and provide a new wharf for berthing of RAN ships”. The “new ready use fuel storage facility” will aid in supporting the fuelling of vessels “alongside amphibian ships, afloat support vessels surface combatants and specialist naval vessels, such as submarines, mine hunter coastal vessel and hydrographic ships.”

Another area of expansion virtually untouched in Australian media and punditry circles is the growth of the joint US-Australian spy facility at Pine Gap near Alice Springs. In November 2019, Greg Jenkins, a senior manager for contractor AECOM Government Services Australia Pty Ltd confirmed at a defence industry seminar in Alice Springs that the base was being given a “midlife upgrade”. After over five decades, they are “bringing the old girl up to more modern standards”.

When asked by the Alice Springs News whether retouching the old girl might involve more than just civil construction such as roads and sub-systems, such as technological installations, Jenkins played dumb. “We don’t talk about that side of it.”

Tanter, on the other hand, has been more than happy to talk about it, having detected in early April 2020 the addition of three large new antennas and a “sprinkling of new antennas”. The expansion involved “all the major functions of Pine Gap”, covering signals intelligence collection, espionage operations against other countries and, with the use of infrared telescopes, the means of monitoring conflicts and “preparing for any kind of war”.

With both aviation, military, naval and signals intelligence facilities being developed and readied on its territory for a future conflict with China, Australia now finds itself on a lunatic’s collision course. Beijing is being regularly reminded that Australian military infrastructure will be fair game in any conflict it might have with Washington. From a political perspective in Canberra, this tragic scenario is lamentably entertained, and remains foolishly bipartisan.