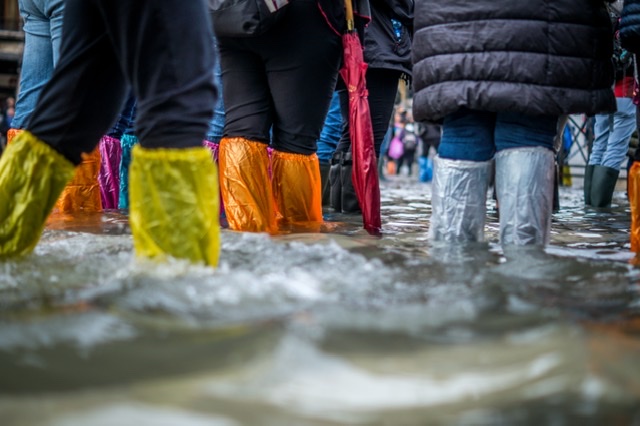 One of the great challenges of city building is building sustainably. Many of our towns and cities are built at least in part on floodplains, which are by definition problematic as places on which to build.

But what exactly is a floodplain? It’s not always easy to tell whether or not you’re on one, and many people have no idea that their house sits on land that is certain to be flooded at some stage.

A floodplain can be defined as an area that is liable to be inundated by water escaping from a watercourse such as a river or creek. Its limits are determined by the maximum extent of potential flooding as would occur in the so-called Probable Maximum Flood (PMF). A PMF at a location, say Windsor, New South Wales, is an estimate of the highest flood believed possible there. Such a flood could be caused by an extremely intense rain event over an already saturated catchment. As a limiting case, a PMF at a location does not have a precisely calculable return period (the average number of years between PMF events) but a flood of near-PMF proportions might be thought of as occurring, on average, only once in thousands or even tens of thousands of years.

Floodplains are not as flat as people think or as the word itself implies. In fact, they can be decidedly ‘crinkly’, with big differences in elevation over short distances. Windsor, a town located on apparently high ground between the Hawkesbury River and its tributary South Creek, is in fact located on the high part of a floodplain created by the two streams. The proof is that the entire town is built on alluvial soil ꟷ that is, soil which is derived from material deposited by floods.

The fabled 1867 flood on the Hawkesbury River reached a height of more than 19 metres on the gauge next to the new Windsor Bridge over the river. Another few metres of flood depth, say three or four, would have inundated all of the town. Before the peak was reached, Windsor had already become an island, and a further rise would have seen all of it flooded. Those on it, townsfolk and people evacuating from lower areas nearby, would have been swept away as the island shrank and then disappeared. The geography of the valley in the general area of Windsor means that built-upon islands that shrink to nothing will occur as very big floods rise.

Some long-ago larger flood than the flood of 1867 deposited material above the level reached in that year. This makes the point that floods bigger, indeed much bigger, than have been seen at Windsor in European times have occurred there. Of all rivers such a thing can be said: they have been there for many millenia, but we have been measuring floods on them for only a fraction of their histories. We need to think about our environments not in terms of our human life spans but in terms of long spans of geological time.

The situation of Windsor is not unique. At Maitland, the 1955 flood left a small ‘dry island’ in the Central Business District. This island escaped inundation in the great flood of 1955. The natural soil there is alluvial, though, deposited by floods bigger than the one that assailed the town in 1955. Elsewhere in Australia there are many similar cases.

Many of today’s residents of these places would not realise that they live on floodplain land. They don’t really need to be concerned about the PMF, but they should think about big floods that nevertheless fall well short of the proportions of PMF events. At Windsor, the PMF has been calculated as reaching a height of about 26 metres at the gauge next to the bridge over the Hawkesbury.

In New South Wales, state government regulations are intended to limit development on floodplains. In effect, lines are created on maps to define the level estimated to be reached by the 1% Annual Exceedance Probability flood – the so-called 100-year flood. At Windsor this line is drawn at a height of 17.3 metres on the gauge, or about 9 metres below the estimated PMF level. So, from about 1 metre (the approximate level of the river at high tide when there is no flood) to more than 17 metres, residential floors cannot be built. The lower part of the floodplain is thus denied to development except for uses like agriculture and sporting fields.

But that leaves a considerable potential for development above 17.3 metres and below the level of the PMF. This might be called the ‘high floodplain’, subject to inundation but as a general rule not frequently. At Windsor, most of the high floodplain has been inundated just once in the past 200 years, some not at all in that time. It’s important to note, though, that inundation could happen a few times in a relatively short period and then not at all for hundreds or thousands of years.

In decades past, going back to the earliest European settlement, there were no restrictions on development on floodplains in New South Wales. The consequences were periodically disastrous, including deaths in numbers in big floods, and they led eventually (in the 1960s) to governments instituting height controls on development. Much of the ‘old’ development has disappeared from the edges of Windsor, some houses swept away in floods, others becoming derelict with age and some deliberately removed. But some remain still and are vulnerable to what might be called ‘middle-level’ flooding such as was seen at Windsor recently (when the Hawkesbury reached a level on Wednesday, 24 March of just under 13 metres at the gauge).

Several bigger floods than this one have been seen at Windsor in the lifetimes of current residents. They occurred in 1990, 1978, 1964, 1961 and 1956. Some of today’s dwellings there, built before floor-height regulations were introduced or properly policed, experienced over-floor inundation in them. There were other big floods in earlier times, back to the 1790s when the first European settlers were severely affected. The first of those farmers built their houses at very low levels and promptly lost them.

What should we do about development in the valleys of the Hawkesbury River and its tributaries, including along South Creek where much development has taken place in recent times and continues still? If we are serious about learning the lessons of floods, we should consider raising the flood planning level from its present 17.3 metres (at Windsor; other numbers apply elsewhere in the valley). Perhaps it should be raised to 19.3 metres, the level reached in 1867 and representing a flood of an average return period of between 200 and 500 years.

This would ‘sterilise’ much of the land that is currently available for development for housing. It would not make all new development free of inundation for all time, but it would limit the trend to making more dwellings vulnerable to inundation. It would also disadvantage those, including developers, who have bought land in the expectation of being able to subdivide and build upon it.

Floods are enormously costly in economic terms, and they often ruin people financially. It would be politically impossible to sterilise the whole floodplain of the Hawkesbury River Windsor, for example, would have to be abandoned but the current flood planning level of 17.3 metres there is far from optimal. Its legacy, in leaving much floodplain land available for urban development, guarantees that many people will have to confront disastrous floods at some stage.

Our approach to developing floodplains is unsustainable. That must be confronted.