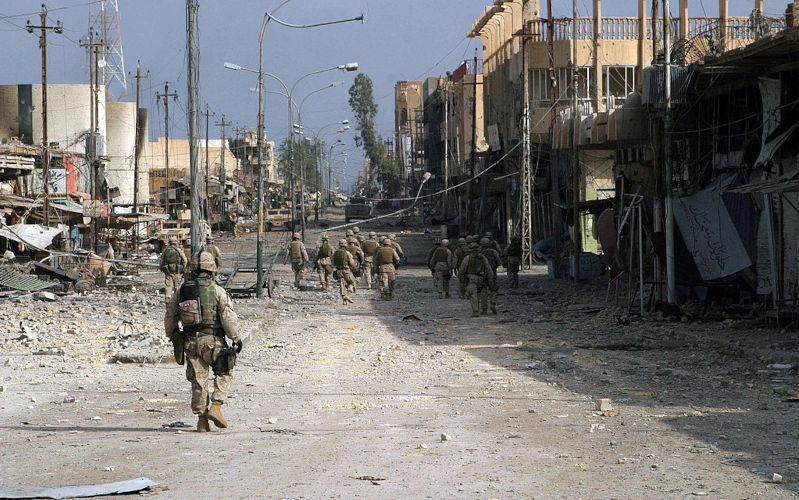 The late Jim Molan will be remembered for many things. Few will remember him for the widespread violence by Coalition troops under Molan’s command during the brutal assault on Fallujah and other Sunni cities during the illegal occupation of Iraq in late 2004.

The Australian media continues to fail us badly over its coverage of the Middle East wars, terrorism and the continuing disaster of ISIS. That failure began with the invasion of Iraq. Unlike important overseas media, no Australian media has admitted or apologised for its failure in the coverage of the Iraq war and its consequences. As is often the case, our media was embedded in the ADF in support of Coalition policy. The political class sticks together.

News Corp media has been most at fault.

There is probably no more obvious example of how News Corp works than the way it supported George Bush’s invasion of Iraq, assisted by Australia. Before the invasion, during it and in the years since neither News Corp nor any other main stream media in Australia has ever confessed to error, to its unprofessionalism. Such media organisations as the Washington Post, the New York Times and the Economist have all apologised for their mistaken assessments and their encouragement of the invasion of Iraq, and its terrible consequences, particularly for the Iraqi people, the region and even the lives of the invaders. We are less safe in Australia because our troops are over there.

Just consider what News Corp told us about the Iraq war – and it is best to start at the top with Rupert Murdoch. He said in 2003 ‘We can’t back down now where you hand over the whole of the Middle East to Saddam. … I think Bush is acting very morally, very correctly. … The greatest thing to come of this to the world economy, if you could put it that way, would be $US20 a barrel for oil.’ (Bulletin, 12 February 2003).

He added a few weeks later ‘We worry about what people think about us too much in this country, [the US]. We have an inferiority complex it seems. I think what’s important is that the world respects us … The US troops would soon be welcomed as liberators.’ (Associated Press, 3 April 2003).

When things fell into chaos, Murdoch said ‘Australia had no choice but to see the job through. The situation in Iraq has been misrepresented. … There’s tremendous progress in Iraq. All the kids are back at school, 10% more than when Saddam Hussein was there. There’s 100% more fresh water. … Most of Iraq is doing extremely well.’ (ABC radio Sydney, 7 April 2004).

In an editorial The Australian mocked the critics of the war whom it described as ‘the coalition of the whining’. It added “Never underestimate the power of ideology and myth-in this case anti-Americanism-to trump reality” Heaping scorn on its critics, such as the Labor Party, the foreign editor of The Australian, Greg Sheridan said that ‘George W Bush was really a modern Winston Churchill’ (The Australian, 15 August 2002). He added later that ‘The Blair dossier should transform the debate over the Iraqi threat. Either Tony Blair is a monstrous liar or Saddam Hussein is. Take your pick.’ In The Australian on 26 April 2003, Sheridan really let himself go. ‘The eagle is soaring. The bald eagle of American power is aloft, high above the humble earth and everything it sees is splendid. For as it soars and sweeps it sees victory, power, and opportunity.’ More than three months after the invasion Sheridan still thought ‘WMD doubts are ludicrous.’ He said that hawkish US official John Bolton “had provided him, almost as an afterthought, with the sensational evidence that would prove the existence of Saddam’s WMD’.

On September 9, 2002, Andrew Bolt wrote ‘Let me spell it out slowly for [Labor politicians], (Crean and Rudd). Saddam. Won’t. Let. In. Inspectors.’ Two weeks later when inspectors were admitted, Bolt didn’t think it worthwhile apologising. He thought the opponents of the war were ‘in effect pro-terrorist’. Following the 2005 Iraqi election Bolt said “At last democracy has come to Iraq. And yet our sneering “elite” insist it would have been better to leave the murderous Saddam alone. This is what we who backed the liberation of Iraq dreamed of”. Some liberation!

Rod Tiffen put the News Corps performance on Iraq very succinctly in his book. ‘The result was that the US and its allies mounted a pre-emptive war against Iraq and their stated reasons for doing so proved to be a fiction. The gravity of this has rarely been apparent in the Murdoch press. (Tiffen page 148).

There have also been recent reports and debate in the Senate about the role of Australian General Jim Molan in Iraq. He was seconded in 2004 from the ADF and served as the Coalition’s Chief of Operations for a year. He commanded the attacks on Fallujah (Operation Fury), Najaf and Samara.

Whilst our mainstream media was asleep or deliberately turned a blind eye with the encouragement of ADF public relations about what was happening in Iraq and Fallujah, overseas media reported extensively.

On October 16 2004, the Washington Post reported that “electricity and water were cut off to the city just as a fresh wave of [bombing] strikes began Thursday night, an action that US forces also took at the start of assaults on Najaf and Samarra”. The Red Cross and other aid agencies were also denied access to deliver the most basic of humanitarian aid – water, food, and emergency medical supplies to the civilian population.

On November 7, a New York Times front page story detailed how the Coalition’s ground campaign was launched by seizing Fallujah’s only hospital: “Patients and hospital employees were rushed out of the rooms by armed soldiers and ordered to sit or lie on the floor while troops tied their hands behind their backs.” The story also revealed the motive for attacking the hospital: “The offensive also shut down what officers said was a propaganda weapon for the militants: Fallujah General Hospital with its stream of reports of civilian casualties”. The city’s two medical clinics were also bombed and destroyed.

In a November 2005 editorial denouncing its use, the New York Times described white phosphorous, “Packed into an artillery shell, it explodes over a battlefield in a white glare that can illuminate an enemy’s positions. It also rains balls of flaming chemicals, which cling to anything they touch and burn until their oxygen supply is cut off. They can burn for hours inside a human body.” News Corp was outraged when Saddam Hussein used phosphorous against the Kurds but was silent when the US used it in Fallujah.

In early November 2004, alongside the New York Times reports that Fallujah’s main hospital had been attacked, the Nation magazine referred to “reports that US armed forces killed scores of patients in an attack on a Fallujah health centre and have deprived civilians of medical care, food and water.”

The BBC reported on 11 November 2004 “Without water and electricity, we feel completely cut off from every one else … there are dead women and children lying on the streets. People are getting weaker from hunger. Many are dying from their injuries because there is no medical help left in the city whatsoever“.

On 14 November 2004, the Guardian reported “The horrific conditions for those who remained in the city have begun to emerge in the last 24 hours as it becomes clear that US military claims of ‘precision’ targeting of insurgent positions were false. … The city has been without power or water for days.”

A further allegation supported by BBC pictures on 14 November 2004 is that coalition forces prevented the distribution of aid supplies to civilians.

The Independent referred to an Italian documentary which claimed that Iraqi civilians, including women and children, had died of burns caused by white phosphorous during the assault on Fallujah.

According to Ali Fadhil writing in the Guardian of 12 January 2005, “The US military destroyed Fallujah but simply spread the fighters out around the country. They also increased the chance of civil war in Iraq by using their new national guard of Shias to suppress Sunnis’.

The Australian media is amongst the least trusted institutions in Australia. That is not surprising and the so called foreign affairs experts in our media are a reason for that lack of trust.

Included below is a link to an article by Chris Doran. If correct, the claims are an indictment on Australia’s military presence back then in Fallujah.  What now passes for legitimate military action when civilians are so exposed?

A link to the article is available here: