The Monarchy is facing a legitimation crisis 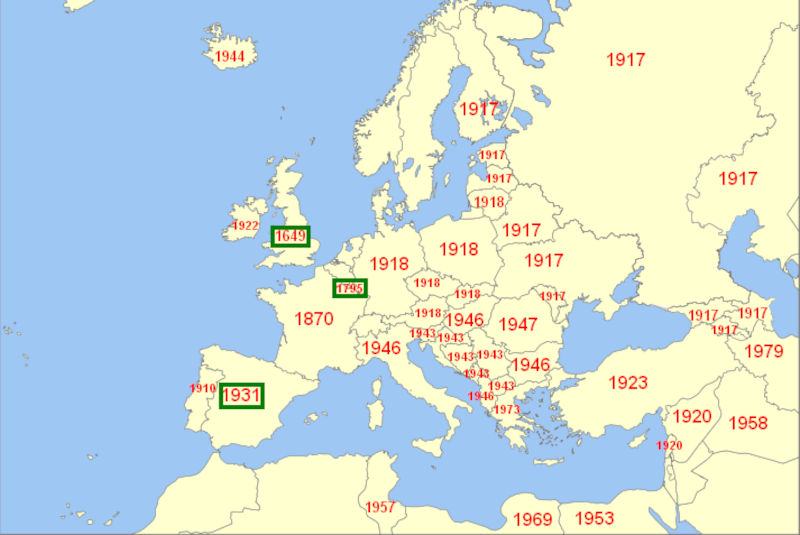 Dates of the latest abolitions of monarchies in Europe and the territories nearby. A green rectangle indicates that the monarchy was restored afterwards and is currently functioning. Image: Wikimedia Commons

In monarchical systems there is always a legitimation challenge when the crown passes from one generation to the next. Whether it becomes a legitimation crisis depends on a number of factors.

Elizabeth’s long reign took republican alternatives in the UK off the table for decades. She was a stable constant who discharged her responsibilities almost entirely without domestic controversy or rancour. Pomp and pageantry cleverly disguised the illegitimate nature of hereditary power and, to a lesser extent, the wayward behaviour of her dreadful family.

Charles, at least initially, will hope that continuity, honouring the traditions of constitutionality and ceremony, will paper over any cracks that may now appear because political change can no longer be seen as a personal affront to his popular mother.

However, it is unclear if the public’s appetite for change has only been suspended for the duration of Elizabeth’s reign, or whether there will be a reinvestment in the status quo under Charles. Clearly there is a significant gap between the mainstream media’s obsequious and conformist coverage of the mourning and funeral, and outbreaks of dissent during monarchical walks and on social media. The heavy handed censorship of protestors suggests the Establishment is worried and not leaving anything to chance. The British ruling class will not give up their status and privileges without a fight, and are deeply invested in their hereditary sovereign.

Perhaps the greatest threat to the monarchy will come from tangential factors which will more immediately impact public opinion. The calamitous economic effects of Brexit, which we are told Elizabeth supported, have only just begun and will get much, much worse. Fairly or not, Charles’ ascension to the throne may mark the beginning of a significant economic crisis in the Kingdom, driven by soaring energy prices and industrial militancy, triggering the country’s rapid relative decline.

The slow consummation of de-colonisation is now impossible to ignore. Challenges to the Churchill cult in both three new biographies, university curricula, and in attacks on the symbols of male white rule, illustrate the vulnerabilities of Empire narratives in the 21st century. As in the US with the BLM movement and its challenge to institutionalised racism, nothing less than a total revision of British imperial history – especially its appalling treatment of the indigenous inhabitants of its conquered territories – is underway. It’s a very ugly story. There will be fierce resistance and history wars, but the die is cast. Charles will struggle to navigate the Crown safely through the unforgiving waters which lie ahead.

These are debates which will play out in the UK, where tourism has become The Firm’s last remaining raison d’etre. In the monarch’s outer realms, the absurd detritus of colonial rule is finally being swept away, though not so much in Australia where anxiety about change is almost acute. The youngest states of the Commonwealth hold far fewer fears about aligning their political arrangements more closely with their modern national outlooks.

The claim that there can be no superior model than an unelected hereditary monarch from one country who acts as the head of state in another is risible, and a reflection of low self-confidence amongst local political elites. The pantomimes of royal births, deaths and marriages, and soon a coronation, together with endless royal tours, had their intended effect on older generations of Australians. Without them, what would feature in New Idea, Hello! and Woman’s Day? However, it remains unclear if younger Australians, especially those from non-Anglo Celtic backgrounds, will fall for the mystique which so entranced their parents and grandparents. Indifference may soon prevail, and that would be fatal for the monarchy in Australia. It is therefore unsurprising that the Palace is already planning an early royal visit to these shores, lest republican tendencies take hold in the aftermath of Elizabeth’s demise.

Only popular consent reflected in free and fair elections, confers legitimacy upon political office-holders. That there are people who openly oppose this principle in the 21st century only makes one wonder how Australia even became an independent state at the beginning of the 20th.