The National Press Club exemplifies the erosion of journalism 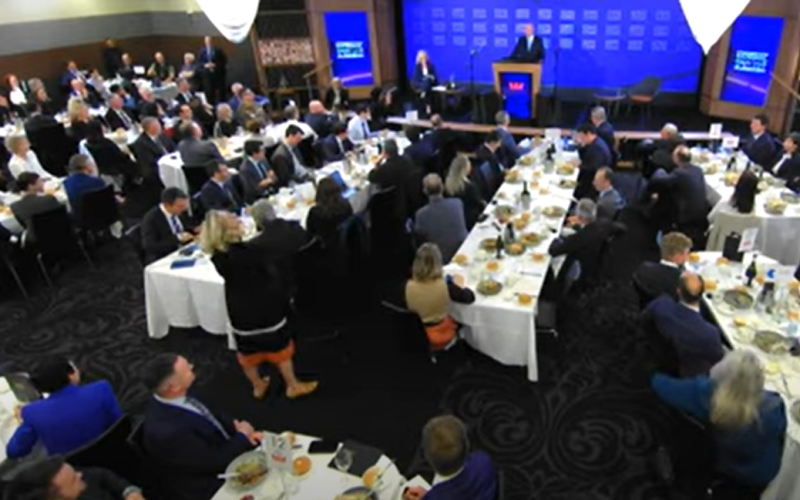 The National Press Club sells access to influential journalists to organisations with vested interests in shaping government policy and self-promotion.

Industry bodies and lobbyists aside, of the 62 sponsors and corporate members of the National Press Club (NPC) fewer than one in five are wholly Australian-owned companies that produce goods and services.

Those dozen Australian-owned businesses are mostly directly, or indirectly, engaged in business with the Australian government. In the past year eight of those companies collected more than $920 million from federal government contracts. Of the remainder, three are businesses directly impacted by government policies while the fourth, Transurban, collects $2.2 billion from motorists running toll roads in Sydney, Melbourne and Brisbane.

Corporate supporters and advertisers have traditionally been the bane of journalists and editors. There used to be nothing more infuriating than a call from management telling you to back off from a story for fear of upsetting an advertiser or one of your media proprietor’s mates at the big end of town. Now Australia’s mainstream media has become so tame it is hardly imaginable that any hack would go off on their own in search of an actual piece of news.

Today news drops in the laps of journalists and, for the Canberra press gallery, the “drop” usually comes from spin merchants in government, landing in every hack’s inbox.

The once mighty fourth estate has been well and truly tamed by the spin merchants in government, and now it appears the big end of town, so adept at taming politicians, is going to work directly on the journalists charged with holding politicians to account.

A seat at the table

From the perspective of the Canberra bubble, the NPC is hardly conducting itself differently from most other representative groups and associations in the nation’s capital. Canberra is a town of influence peddling and of lobbyists. But how healthy is this influence peddling for our nation’s democracy?

Corporations, industry groups and lobbyists set up shop in the national capital to advance their interests. Journalists are supposed to question whether those interests align with the public interest. That some of these groups should find themselves rubbing shoulders with senior correspondents from mainstream media outlets is not, in and of itself, cause for alarm. However, should the NPC be facilitating these shoulder-rubbing events?

NPC chief executive Maurice Reilly says: “Each of those industries are highly regulated and are subject to the laws of Australia. We can’t and don’t assist with their representations to the federal or state governments or the media.”

However, Reilly’s assertion seems to be at odds with the NPC’s own website. The member benefits page states corporates are given “a literal seat at the tables of influence, with tickets to our esteemed National Press Club addresses throughout the year, plus table signage”. Included in member benefits is participation in “the annual Corporate Gold Day alongside key political figures and senior journalists from the Canberra press gallery”.

Whilst the NPC is hardly operating as a lobbying firm, the fact remains that dozens of organisations with a clear vested interest in both shaping government policy and promoting their public image have weekly access to a room full of influential journalists. And they pay the NPC for the right to be in that room.

As journalists used to say about politicians who do nothing wrong but still attend events financially supported by industries they regulate, “the optics are not good”. According to the NPC website:

“You [corporate members] will enjoy unique access to the media and political spheres complementing your particular policy and advocacy priorities.”

It goes on: “Aligning your brand with the National Press Club is an opportunity for unparalleled engagement in the Australian political debate and announces that your organisation is part of the business culture in Canberra.” It is alarming to say the least that the NPC would promote itself as a key player in the sphere of business — aren’t journalists supposed to be in the business of accountability?

A handful of NPC sponsors are engaged in business activities that most reasonable people would consider ethically problematic.

Sportsbet, owned by Irish gaming giant Flutter Entertainment, is a corporate member. Australians lose a staggering $25 billion a year gambling; the social problems caused by gambling are massive, with research suggesting up to 400 gambling-linked suicides in Australia each year; and as many as three-quarters of regular gamblers have drinking problems.

The alcohol industry also gets a seat at the NPC table, with Japanese-owned Lion Group (whose brands include XXXX, Toohey’s, James Squire, Hahn and James Boag) a listed member. So too are industry representatives the National Wine Show and Spirits and Cocktails Australia.

The innocuously named Imperial Brands is also a corporate supporter. It is one of the biggest of the big tobacco companies, producing more than 300 billion cigarettes a year worldwide.

Death merchants on board

While Imperial Brands kills slowly, other NPC sponsors prefer a quick death. Foreign weapons makers BAE Systems (UK), Saab (Sweden), Lockheed Martin (US) and Thales (France) all get a seat at the table.

Last week when Defence Minister Peter Dutton was beating the drums of war at the press club, the BAE Systems table was conveniently located behind the microphone that journalists step up to when asking questions. In the past 12 months, Dutton’s department has paid BAE Systems almost $1.8 billion for its weapons systems, and BAE just happens to be in the running for Scott Morrison and Dutton’s promised nuclear submarines.

Whether deliberate or accidental, the BAE Systems logo appeared on screen across the ABC on a dozen occasions, which is notionally in contravention of the ABC charter in relation to the identification of commercial brands.

More than one in three NPC sponsors are entities owned by foreign corporations or foreign governments — that’s twice as many foreign-controlled members as Australian-owned companies (excluding industry groups and lobbyists).

Apparently sitting all alone is Chinese-owned tech giant Huawei. The mainstream media has been an enthusiastic supporter of the ban on Huawei supplying 5G infrastructure in Australia. It seems, however, that as long as it pays its fees Huawei can still get a table at the weekly NPC address.

The Big Four accounting firms — PWC, EY, Deloitte and KPMG — which pick up hundreds of millions of dollars in government contracts, while advising multinationals on how to minimise their tax obligations to the Australian government, are all corporate members.

Pharmaceutical company MSD (Merck Sharp & Dohm) is another member and, according to the company, is on track to post $69 billion in sales this year. Pharmaceutical companies in the United States spend more money on political lobbying than any other industry. Two months ago the prime minister announced the government had signed a deal with the US drug company for the supply of its COVID-19 treatment drug Molnupiravir, subject to TGA approval.

Ten members are peak industry groups, representing the interests of members with billions of dollars in annual revenue. The Pharmacy Guild of Australia is an NPC member yet a simple Google search reveals virtually no mainstream media outlet reported that it collected JobKeeper payments at a time when the industry was reporting “staggering” sales throughout the pandemic.

It’s almost as if the best way of avoiding Canberra media scrutiny is to show up in a room full of journalists.

This article was first published at APAC News and is reproduced with permission.