The Plight of Yezidi Refugees and why my heart bleeds

When the Federal government named the city of Armidale in northern NSW a regional refugee settlement in 2017, it was envisaged that the newly arrived refugees would need a lot of support to settle and integrate into the community, but we did not imagine how giving this support would change us.

Yezidi refugees began arriving in Armidale in early 2018, and so far, Armidale hosts about 650 Yezidis. In 2019, I went to Armidale to be part of a team charged with the responsibility of providing the newly arrived Yezidis with rehabilitation services as a trauma counsellor, having worked with refugees from different parts of Africa and in Australia.

I just spent the most incredible nine months with this community I knew little of until about 3 years ago. The Yezidi are an ethno-religious minority group mainly coming from Northern Iraq and Syria. This community has been subject to persecution for generations, and in 2014 many Yezidis were forced to flee their homes as a result of persecution by Islamic State (IS) militants. Some of the Yezidi refugees were granted humanitarian visas to resettle in Australia, mostly in regional NSW- the towns of Armidale, Coffs Harbour, Wagga Wagga, as well as Toowoomba in Southern Queensland. Most of these are survivors of the August 2014 genocide (Sinjar Massacre) by IS in which thousands of men were captured, killed or held in captivity, while women and children were abducted and forced into sexual slavery.

An estimated 7000 women and girls were held in sexual slavery, repeatedly sold, gifted or passed on among ISIS fighters. About 3000 of them are still missing to this day, (JRS, 2020 estimates). These most gentle, loving, hospitable, caring people found themselves in the middle of the most atrocious treatment as they witnessed their homes destroyed, their loved ones shot dead, their little children taken away from them, molested, raped, murdered. In 2016 the UN recognized these atrocities as genocide, and there was a brief, intense outcry about them, but it seems we have all since moved on.

It seems to me the human mind has an uncanny way of wanting to forget things rather than remember them. We are so busy trying to document happenings, and the media so frantic about covering events and digging into the details of what happened, that this frenzy becomes an end in itself. It’s all a guise for trying to forget what did happen. You see, once I’ve dug into the issue, said a gamut about it, I have ‘dealt’ with it. It has received its quota of attention and no one dare complain otherwise. In this, I desensitize you from all feeling regarding the event and desire to know more, and whenever approached, you can say ‘Oh I heard about that. I saw it in the News. It’s all over social media.’ No one then cares about it any further.

It’s not lost to me that the nine months I spent with this community corresponds uncannily to the 9 months I spent in my mother’s womb, another incredible journey! Clearly the most remarkable growth happens in the womb evidence of which is fully revealed at the awe-inspiring moment of birth. I have been immersed in the womb again, growing, learning, developing, and bursting my way into the world. I have been reborn. Into a world in which pain co-exists with joy, tears with laughter, anguish with passion.

My heart bleeds for the children left motherless, mothers left childless, fathers and sons left spent and empty. Everything shattered. No words can capture the depth of horror our Yezidi brothers and sisters experienced! No picture even. At least not an external one. It has to be clearly and deliberately imprinted in our innermost beings where it is inerasable. Painted in eternal colours that flow like blood.

They were left lost, powerlessness, robbed, homeless. And they are searching for home. Even in places where they have been given refuge, they seek home. Their real homes were bombed out, and are now deluged with leftover mines, mortars, booby-traps, and mass graves, so they seek home. Home is where you matter. You are not forgotten. You are safe. You are free. You can make a tuneless sound, and the person next to you picks it from you and joins you, and together, you make a song. Home is that song. Home is the core.

When all the layers of activity, programs, services and reporting are taken off, what really matters is that sense of home. We must be willing to shed off the layers, to allow ourselves to be deeply moved, and touched by what we see, to remember and not numb ourselves from feeling. To go beyond the report, the editorial piece, the News brief, the research findings, and touch that core.

I may not feel what you felt Salma, I may not see what you saw when they put the bullet in your husband’s head as you watched, wrenched your little daughter away from your arms, torched your home, and dragged you along as your children screamed behind you. I may not experience the shock, horror, utter despair, but I can be here with you, I can be there with you too. I can place my feet firmly where yours would be, and allow your wobbly ones to step on mine, and attempt to walk with you, a step at a time. 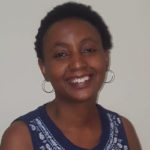 Dr Lydia Wanja Gitau is an Honorary Associate and part-time lecturer in the Department of Peace and Conflict Studies, School of Social and Political Sciences, University of Sydney, where she completed her PhD in 2016. Lydia was the recipient of the International Peace Research Association (IPRA) Foundation’s Dorothy Marcus Senesh Graduate Fellowship of 2014-2015, and the 2014 Postgraduate Teaching Fellowship of the Faculty of Arts and Social Sciences, University of Sydney.