The problem on the floodplain where we should not be building. 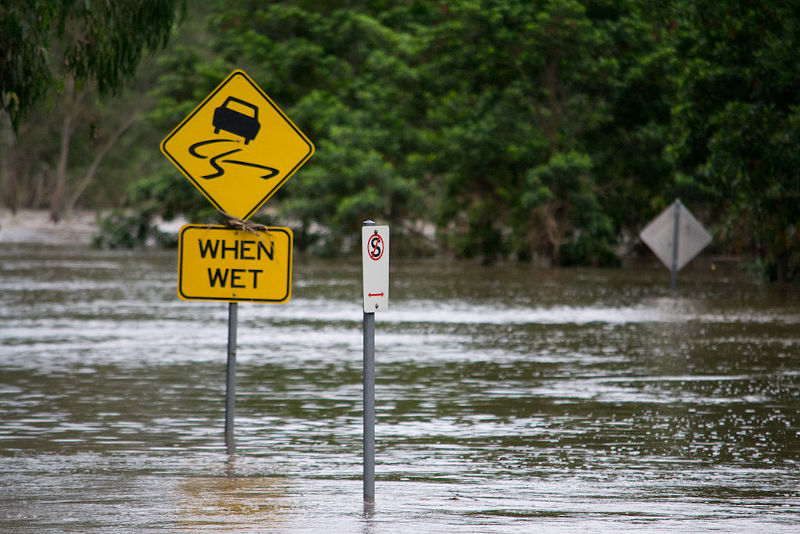 Many towns and cities are located at least in part on floodplains and are thus at risk of inundation. Image: Wikimedia Commons

After Lismore’s horrific flood, we simply must reconsider our approach to development on floodplains.

Sadly, it is likely that we will not, at least radically. We will continue to see dreadful floods as we always have, and then move on.

Last week Shane Stone, former Chief Minister of the Northern Territory and now head of the National Recovery and Resilience Agency, argued that we should prohibit building houses on floodplains. His “fighting words” about those who built in fire- and flood-prone areas were not universally admired. Some thought them insensitive and blaming of victims.

But they should force us to focus on a central, undeniable fact: building on floodplains is the fundamental cause of our massive, repeated, highly costly flooding woes. Many towns and cities are located at least in part on floodplains and are thus at risk of inundation. Lismore is simply the latest example.

Beginning at the dawn of European colonisation, towns grew on rivers for reasons of transport, waste disposal and proximity to fertile floodplains. Once established, they defined the settlement pattern and attracted further investment and growth. Many suburbs of our major cities sprang up, some in flood-liable areas and some newly-created ones still growing apace on floodplains.

Stone’s prescription will be highly problematic politically. Consider the meaning of the term ‘floodplain’ as accepted by hydrologists, floodplain managers and land use planners: it refers to land that will be inundated by floods, including those of ‘Probable Maximum Flood’ (PMF) proportions. PMFs flood to much higher levels than the ‘flood planning levels’ (FPLs) below which residential floors cannot be built in most jurisdictions in Australia.

Typically the FPL is set at the level estimated to be reached at the height of the 1% Annual Exceedance Probability (AEP) flood, known colloquially as the 100-year flood but better thought of as having a 1% chance of being reached or exceeded each year at a specified location.

Land above flood planning levels will be inundated on occasions, but only in extraordinarily huge floods and thus only extremely rarely. The PMF is a limiting case; it does not have a ‘return period’ measurable in the average number of years between occurrences. But bending the definition a little for the purposes of this discussion, a PMF can be thought of as being experienced at a specified location only every several thousands or tens of thousands of years. Floods close to PMF proportions are rare, but they have been recorded.

There is a legitimate question as to whether ‘high’ floodplain land, some of it well above FPL levels and inundated only very infrequently, should not be developed for urban purposes. Many will argue that the likelihood of its being flooded in any specified period (including the lifespan of buildings upon it) is so low that it should not be ‘sterilised’ or used only for agricultural and recreational purposes.

But it is still floodplain land. Any definition of the word ‘floodplain’ that excludes such land must be arbitrary and will ignore land that could be flooded and put at risk the people and dwellings on it when extreme flooding occurs.

Some figures put all this in context. At Lismore the 1% AEP flood is taken to be 12.4 metres on the local gauge located next to the river in the Central Business District. This level is close to those reached in the great Lismore floods of 1954 and 1974, until last week the highest seen in the city’s history. Last week’s flood reached 14.4 metres at the gauge, and the PMF there is reckoned likely to reach 16.

Or take Windsor, on the Hawkesbury. Its 1% AEP level is 17.3 metres. The highest flood known since European settlement reached 19.3 and the PMF might peak at 27. Windsor is built entirely on alluvial soils, a sure sign of huge floods which occurred long before European settlement. A flood of 21-22 metres would inundate it entirely.

To be consistent with Stone’s prescription, Windsor would not be built now. It is on a floodplain, notwithstanding the fact that the town appears to be on a hill. Floodplains are not flat. Some undulate considerably.

If we extended Stone’s proposal to cover existing urban development, there would be a case for abandoning Windsor completely. The same could be said for the older parts of Lismore (including its Central Business District) and parts or all of scores of other towns around the state. Many suburbs of Sydney, Newcastle and Wollongong would go. In practical terms this is unthinkable.

Many people, perhaps 15% of the population of New South Wales (including several tens of thousands in the Hawkesbury-Nepean valley and along the Georges River), live in houses whose floor levels are below PMF levels. Many would not know it: the signs they are on a floodplain have been obliterated by their houses, shopping centres and workplaces. Some live on ‘high’ floodplains close to the levels that would be reached in PMFs; others are much lower but still above FPLs and unaware of the potential for very severe flooding of their properties.

The cost of removing all urban development from floodplains would be massive, well beyond society’s means if owners were to be compensated at anything like market values. It has been advocated in many individual locations, including Lismore where a proposal to relocate the CBD and many nearby houses was seriously considered after the 1974 flood. The same thing happened in Maitland after the town’s worst-ever flood, in 1955.

During the 1800s Gundagai, Bega and Moama were all relocated holus bolus to higher ground after floods and most of Terara was moved to Nowra. At the time they were small places and the levels of fixed investment in real estate and infrastructure in them were low. Such an approach has proved impossible in more recent times. Far too much investment, not to mention heritage, would be sacrificed.

A very small town in southern Queensland, Grantham, was largely relocated to high ground after the disastrous 2011 flood. Grantham’s population at the time was a few hundred. Such a relocation could not be contemplated nowadays for substantial urban centres.

What we must consider is our approach to future development. On the Hawkesbury, where floods reach to great heights because of the constriction of the river’s drainage caused by the narrow Sackville Gorge, the 1% AEP flood planning level is far too low. It should be raised to perhaps 20 metres or more.

Using equivalent levels in areas of currently-occurring and planned future development elsewhere in the Hawkesbury (especially in the valleys of South and Eastern creeks) would greatly reduce future development. This would enrage development interests already committed to and having banked land for subdivision, but it would constitute a real contribution to avoiding the inevitable costs which future flooding will impose.

As things stand, the government’s planning to 2050 is for a near-doubling of the population on the Hawkesbury-Nepean floodplain. Many of these will not be on ’high’ floodplains. This is madness, a guarantee of future suffering.

Until 2007, when the state government mandated the 1% AEP level as the flood planning level in New South Wales, floodplain development was regulated by a ‘merits’ approach based not on statistical abstractions like the estimated 1% flood but on the assessment of risk. Flood risk is not equal everywhere, especially because of the varying heights to which floods can rise.

On the vast floodplains of inland New South Wales the differences between the levels reached by the 1% flood and the PMF are slight; in the east (and especially along the Hawkesbury) that is not so. Unfortunately, the east of the state is where the demand for housing is high and there is much pressure for development on floodplains. The Sydney archetype is the Hawkesbury floodplain. In the past it was the Georges River in western and southern Sydney, but there the floodplains are virtually fully developed.

After Lismore, and in the knowledge that climate change will make big floods even bigger because rain will fall in greater volumes from a warmed atmosphere, we should rethink development. Sadly, the politics of the development of the ‘high’ floodplain, where risk will be perceived as low, will probably defeat the strict common sense of Shane Stone’s prescription for community resilience. But we should certainly abandon the 1% AEP standard and use risk as the determining consideration.