An easing of restrictions in Victoria was predicated on two criteria: a rolling 14-day average of fewer than five cases per day; and fewer than five mystery cases over the preceding two weeks.

It was a wild week to be a Victorian. “BETRAYAL” blared the front page of The Herald Sun. “We are crushed,” wrote 3AW’s Neil Mitchell in an opinion piece for The Age, describing Victorians as feeling “dudded”. The Fin Review’s Phil Coorey declared that “Victorians have kept their side of the bargain” – the exact phrasing Scott Morrison used five days earlier on Sky News. The Herald’s Shannon Deery decried the premier for “refusing to follow his own script”. The Australian described it as a “state of paralysis”. 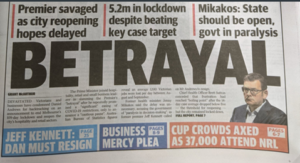 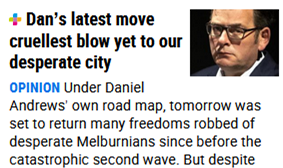 Many Victorians were disappointed, yes. But did the Premier really go back on his word?

In September, several lifetimes ago in lockdown time, a magical importance was affixed to the date of October 26. Retail and hospitality would reopen; outdoor gatherings would be allowed. A step back towards Covid-normal.

Such an easing of restrictions was predicated on two criteria: a rolling 14-day average of fewer than five cases per day; and fewer than five mystery cases over the preceding two weeks. Unfortunately, it appeared only the first criteria registered with some journalists – quite understandable, really, in this age of social media and clickbait.

Was there any mention of the second criterion for easing restrictions? While the Herald’s Deery mentioned it, apparently “the experts weren’t worried”.

That second criterion was only met on Wednesday October 28.

Channel 10’s The Project ran a poll to gauge community response to the “cautious pause”. Some 1500 votes later – 80% of which supported the pause – the poll was quietly taken into a back alley, never to be seen again, for daring to reflect widespread support of the decision. 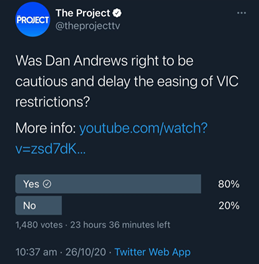 Nonetheless, a seemingly never-ending 24-plus hours later, Premier Andrews fronted up again and announced that restrictions would ease. The city let out the breath it didn’t know it had been holding. The Age ran a piece from David Milner, of The Shot fame, of all people. Great piece, too. There were rainbows and butterflies, and children cartwheeling in the streets. Or maybe that was just me.

The good vibes lasted just long enough to find something else to be outraged about. I thought it was satire at first (though I think that about a lot of what The Herald Sun writes)…

But no, The Australian got on board too, slamming the Premier for having a drink to celebrate. Some stuff you can’t make up.

The art of a magician is making the audience look away from where the action is truly happening. Scott Morrison is rapidly becoming a master of this.

As evidence regarding corruption and the misuse of taxpayer funds rapidly mounts, Morrison spied an opportunity and Nine Entertainment newspapers – in particular, National Affairs Editor Rob Harris – was happy to oblige.

First there was the “news” of Christine Holgate stepping aside following the purchase of $12,000 worth of luxury watches. The first 350 words of the article was ostensibly a summary of Morrison’s reaction, and how “appalled and shocked” he was.

We got some true insight into the thoughts of the PM; his anger and outrage; his desire to show solidarity to “his” “Quiet Australians”.

I’m not sure I’d agree the boss quite gets the picture regarding sending signs of solidarity. While Morrison has pressured ABC staff to defer pay rises, he has resisted calls to take a pay cut to show empathy with those “doing it tough”, despite earning $549,250 a year. He’s “doing a good job” and cutting the pay of politicians “wouldn’t help anyone”. Other public servants should take a pay cut, of course. Just not him.

It’s also worth remembering Morrison earns nine times the median wage of Australians – almost 10 times more than “his Quiet Australians”. Who is “disconnected from reality”?

The Australian Financial Review, The Australian and The Courier Mail all reported how Morrison “personally intervened” or “forced” Holgate out, repeating the PM’s quotes of being “shocked and appalled”.

The emphasis on Morrison’s role, and his outrage, is in jarring contrast to his government ministers. The PM didn’t seem “shocked and appalled” about Deputy PM Michael McCormack billing taxpayers nearly $1000 to take a RAAF jet to the Melbourne Cup; Stuart Robert, Dan Tehan and Simon Birmingham charging taxpayers $4,500 each to attend a Liberal party fundraiser; Liberal MP Scott Buchholz charging $1700 for a Sydney harbour cruise; $3000 for Eric Abetz to attend a mining industry gala; Peter Dutton and Mathias Corman billing $60,000 for RAAF flights to attend the PM’s swearing in; Stuart Robert charging $38,000 for internet ($2800 a month) (was he mining bitcoin?) and on and on ad nauseam. For many more, see The case for a federal ICAC.

As the pressure for a federal ICAC, or a national integrity commission, rises, Morrison has weaved some magic and swung the spotlight anywhere but on himself, making himself look tough on misuse of funds in the meantime. The media has been happy to oblige. 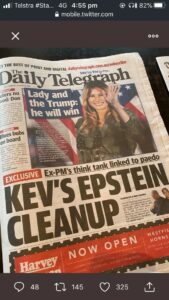 Last week we looked at the struggles The Australian has in counting and interpreting numbers. Now it’s the paper’s English. “To” or “too”?

APAC News this week asked whether ABC management was complicit in letting senior on-air talent promote the Australian Strategic Policy Institute without declaring conflicts of interest? Journalist Marcus Reubenstein noted that: “Following enquiries to the ABC by APAC News, ASPI has scrubbed references to Grant as a Senior Fellow from its website.”

Reubenstein notes, however, that ASPI forgot to remove Grant from the “meet the team” page. “Whoops.” 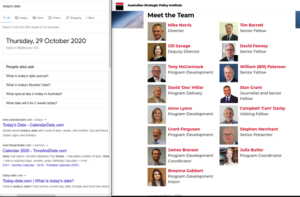